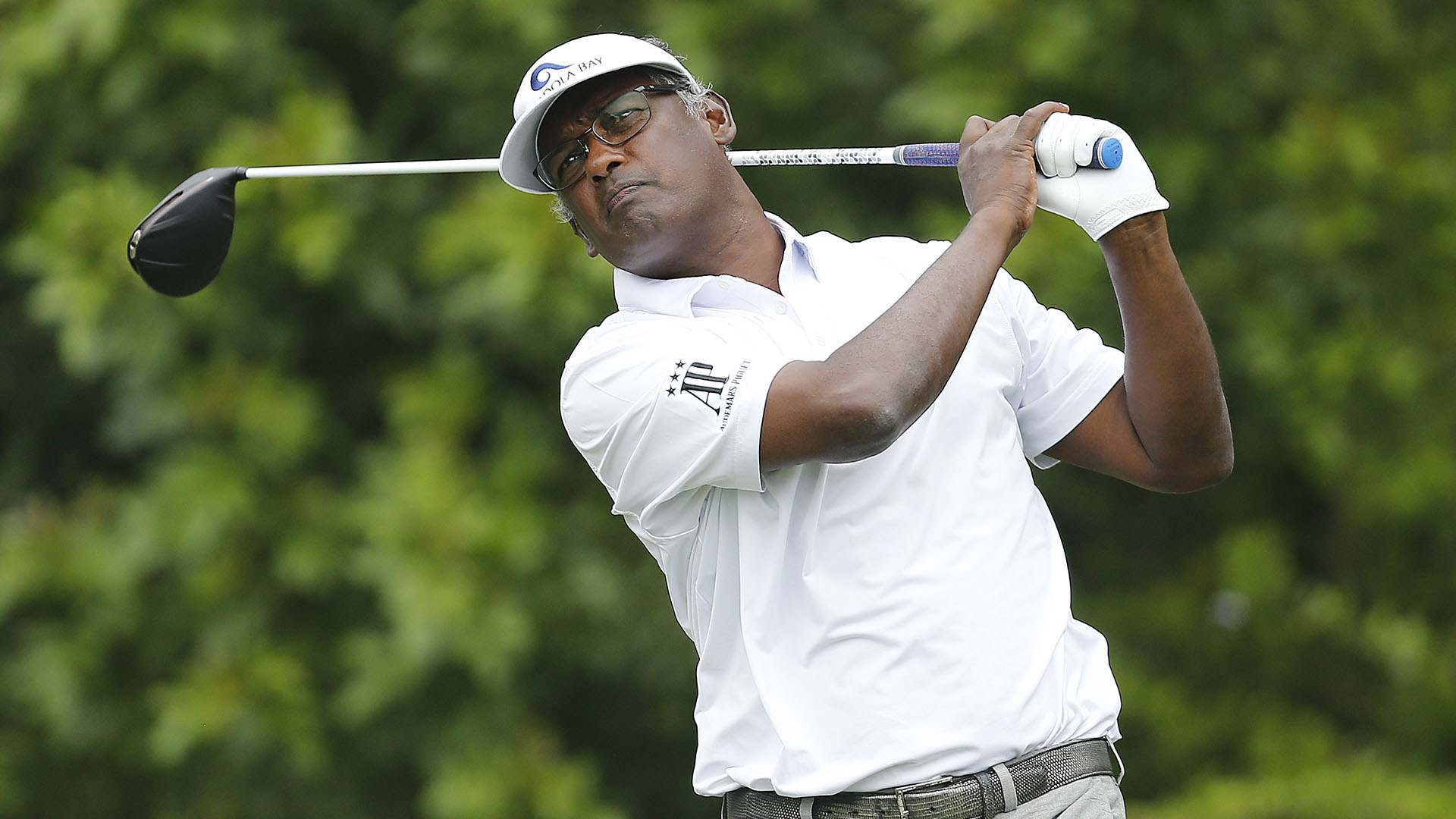 PALM BEACH GARDENS, Fla. – His hair is thinning, and it’s graying, too.

Vijay Singh is 56, and that qualifies him as the “old man” in the Honda Classic this week.

Nobody Singh’s age has ever won a PGA Tour event.

Sam Snead was 52 years, 10 months and 8 days old when he became the oldest winner back at the Greater Greensboro Open in 1965.

Yeah, Singh is in a battle with Father Time, but if you Google the workout routine he posted at year’s start to show how he was preparing for the new season, you see the man isn’t acting his age. He’s looking to build on what is already a World Golf Hall of Fame career. He’s looking to win his 35th PGA Tour title.

That’s what you get when you surf the web for Singh’s workout highlights.

“He’s a machine,” says Jeff Fronk, his trainer back in Jacksonville, Florida, and also his caddie this week.

And, oh yeah, he still hits a ton of balls back at TPC Sawgrass, where he makes his home in Ponte Vedra Beach, Florida.

Fronk has been working with Singh since he was world No. 1.

“I would say he still practices as much now,” Fronk said. “He grinds back home, six hours a day, four or five buckets of balls.”

With a 5-under 65 Saturday, the day’s low round, Singh moved to 6 under for the week, one shot behind the leader, Wyndham Clark (67). Singh won the Honda Classic back in 1999, when it was played at TPC Heron Bay. His last PGA Tour title came in 2008 at the Deutsche Bank Championship.

Does he believe he can win again?

“I'm physically quite capable of doing it,” Singh said. “Mentally, I'm going to go out there and see how my mind works.”

Nobody in today’s generation outworks Singh, he’s pretty sure.

“Kids don't practice anymore,” Singh said. “It's all about ball speed and all about the TrackMan. They've got to go out there and find it a little bit, as well.”

Singh kicked Tiger Woods’ butt more than anybody else did back in the day.

Nobody enjoyed a more dominant run in the Woods’ era, other than Woods himself.

He was the only player not named Tiger to win the PGA Tour Player of the Year Award between 1999 and 2007. Singh won the award in ’04.

“He's obviously been one of the game's best,” said Rickie Fowler, who’s two shots off the lead. “He's a ball striker. He’s not as long as he used to be, but this golf course, you don't necessarily have to be long. It's about getting the ball in the fairway, hitting your lines, and hitting your numbers, and so you don't have to necessarily do anything special. You can't go out and overpower this golf course.”

Singh plays the PGA Tour Champions more than the PGA Tour now, but he believes there’s a mentality on that tour that may help him Sunday.

“Playing the Champions Tour, you've got to make a lot of birdies,” Singh said. “It's all about making a lot of putts. That brings, I guess, aggression out of you. You know you have to make birdies. It's just like the Web.com kids coming over here. They feel the same way. They’re going to make a ton of birdies.”

If Singh does that, he may make history, too.