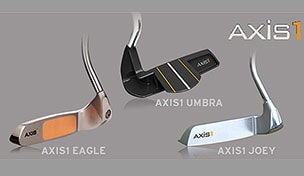 Technology in golf clubs is constantly improving. Professionals and amateurs alike are able to hit the ball farther, straighter and with more consistency than ever before. So when will this technological evolution trickle down to the club you depend on most ... your putter? Well Axis1 Golf is happy to announce that it already has.

Sure putters have improved, but one basic flaw remains, balance. Because of the design, they tend to naturally open if you relax you wrists even the slightest bit, a common problem especially among amateurs, leaving you with absolutely no chance to make the putt. With their patented technology, Axis1 is able to offer the very first perfectly balanced putters the game has ever seen. They have accomplished this with a patented heel counterweight, which places the center of gravity in line with the shaft and right on the center of the putter face – in the club's sweet spot – where you should be striking every putt. Axis1 offers three versions of their patented putter: the Joey, which is the most traditional looking blade-style putter, the Eagle, which is similar to the Joey, but includes a milled copper insert for a softer feel among other upgrades, and the Umbra, which is more of a mallet-style with black ion plating for enhanced durability.

While some putters you may have to get used to in order to use them effectively, the Axis1 will make a difference almost immediately with a consistently tight roll and less skidding and jumping off the face because of that technology. All of the putters weigh 340 to 350 grams, but the Umbra can be ordered in a heavier model, for golfers who prefer more weight.

In the video below, Axis1 inventor and founder Louis Pedraza explains how his putters are sure to help your game. Pedraza is an internationally-acclaimed industrial designer with over 20 patents and has won several design awards. His passion for design and love of golf have led to rave reviews for the Axis1 putters. Sports Illustrated named them 'Best in Show' at the 2009 PGA Show.

While this putter is sure to be a hit with any golfer looking to make more putts (and who isn't?), one group who should be particularly excited are those who prefer the anchored putter. Axis1 proudly refers to their putters as #NoAnchorRequired, because their technology offers the only true answer to the impending anchoring ban from the USGA. One of the main reasons golfers turn to the anchored putter is because it takes the hands out of the stroke, making it more fluid and consistent ... sound familiar? You will get the same effect with the Axis1 putter, except that the patented weighting does the anchoring for you.

Axis1 putters start at $199 and come with a 30-day money-back guarantee. For more information or to make a purchase, visit axis1golf.com.