Beyond 'awful golf', The Match provides glimpse into future of golf and gambling 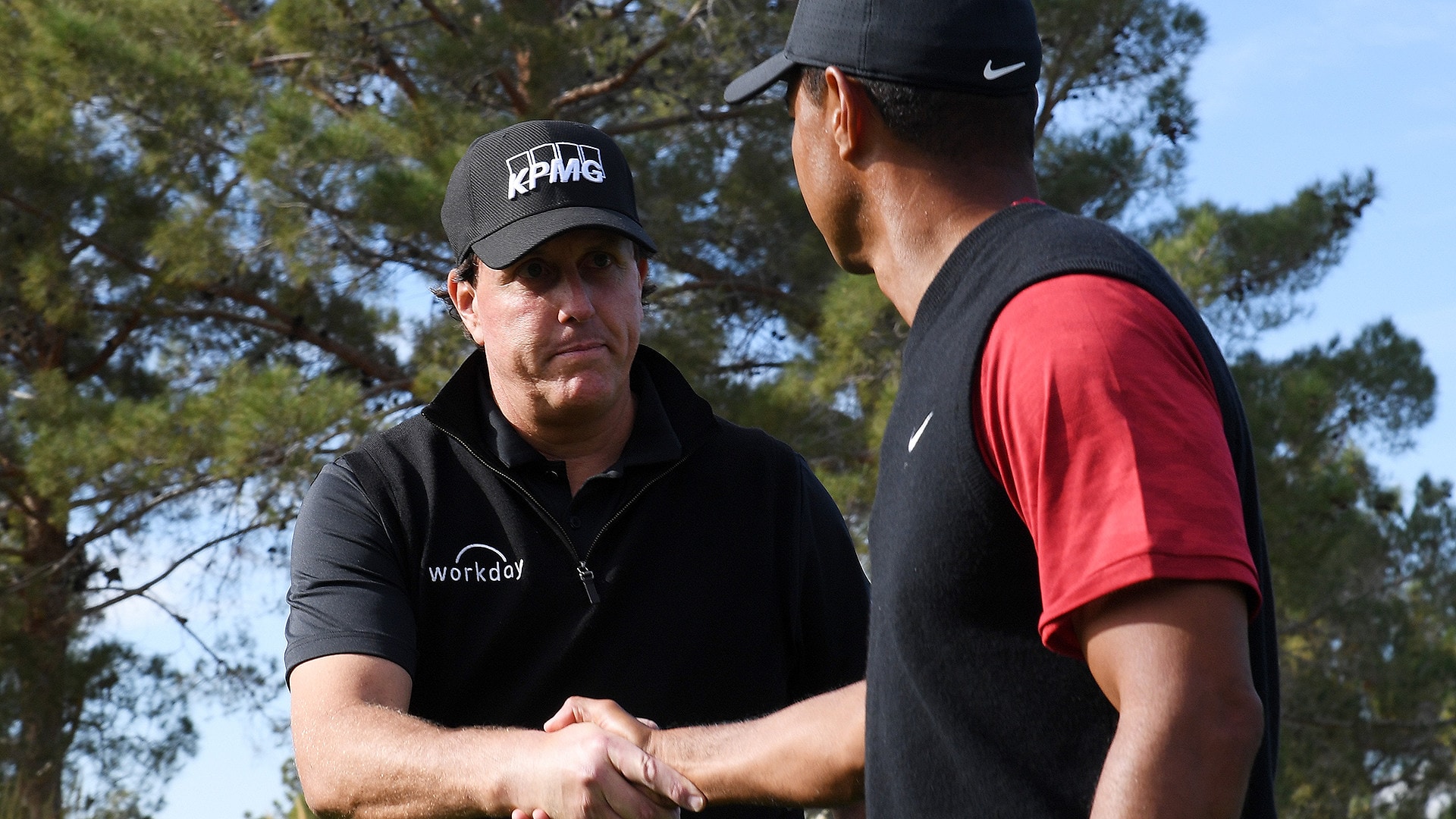 LAS VEGAS – This was always going to be different.

Even if it wasn’t the quality of golf that some would have envisioned, everything about The Match: Tiger vs. Phil was as advertised – a petri dish of what professional golf could look like in the not-so-distant future.

This wasn’t your father’s golf tournament. That was clear from the moment you entered the posh Shadow Creek grounds as hidden speakers blared AC/DC’s “Thunderstruck” while invited guests and assorted VIPs sipped Mimosas. The sprawling lobby at MGM Resort included a full-sized boxing ring that featured an oversized marquee and the kind of hype you only find in Las Vegas.

Under lights before a select crowd, Phil Mickelson did what he’s found so hard to do in his career – beat Tiger Woods, albeit in an event that was both contrived and a curiosity.

From the opening tee shot this was, well, weird.

In the pre-fight press conference Mickelson challenged Woods that he’d birdie the first hole, putting $100,000 of his own money on it, in fact. Tiger doubled down, bumping the bet to $200,000. Lefty didn’t birdie the opener, setting the stage for a day that was more U.S. Open than CareerBuilder Challenge.

Combined, the two stars managed just 10 birdies in 22 holes and both would have shot 3 under par for 18 holes.

For a club that fancies itself the Augusta National of the west, all the way down to the pristine white clubhouse with dark green trimming, Shadow Creek didn’t exactly inspire the kind of play that makes Masters Sunday a must-watch. 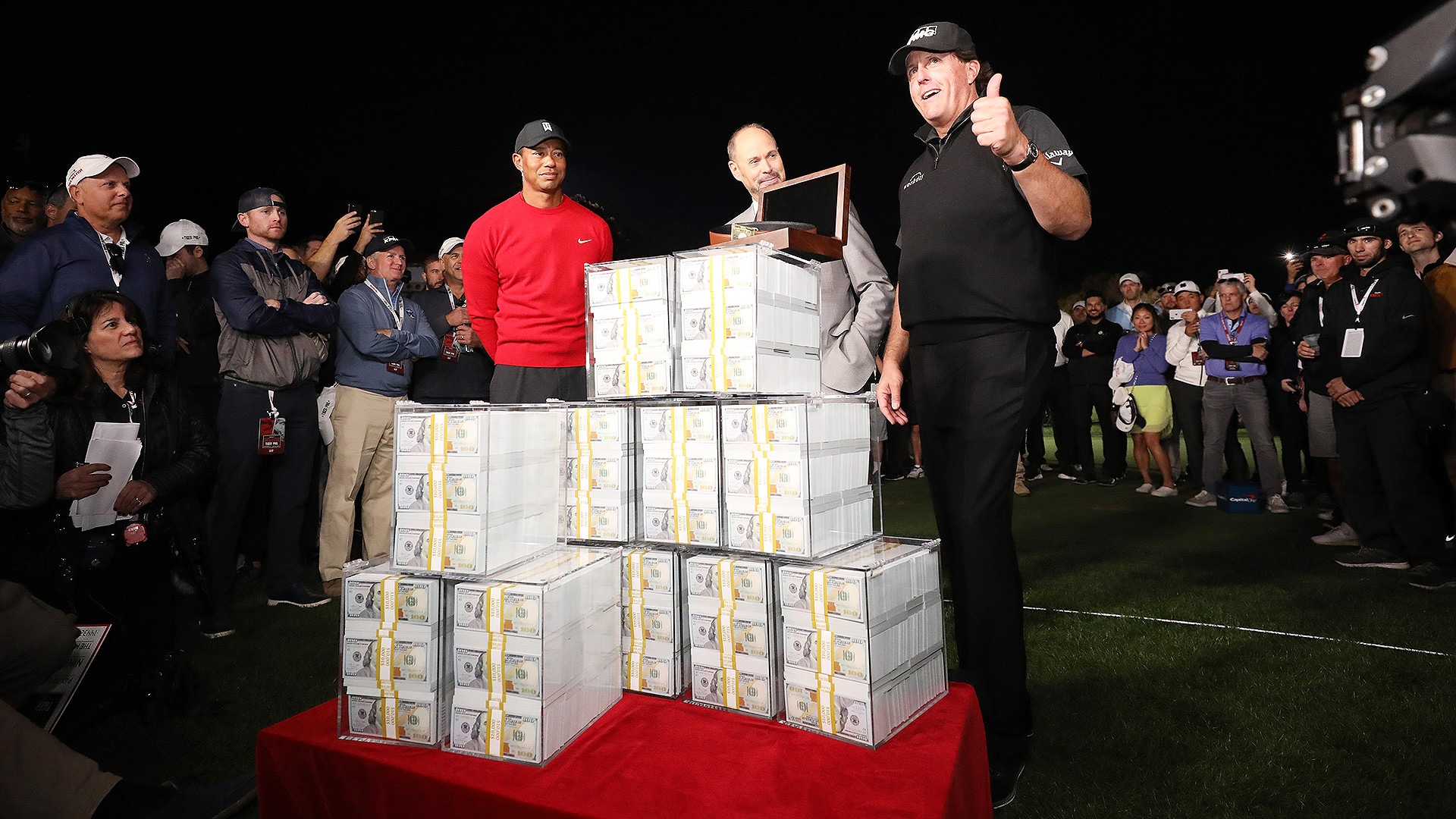 Lavner: From clumsy start to gimmicky finish, The Match fails to deliver

If fact, if not for a makeshift hole that was used in overtime – with the players teeing off from the putting green to the 18th green that was 93 yards away – the two legends might still be playing to settle the $9 million bout.

Considering everything we learned on Black Friday it seems the best way to Tiger-proof a course is to make every tee shot 93 yards, with Woods missing the green twice and posting three consecutive 3s. Thankfully, it didn’t turn into a putting contest, with Mickelson converting from 4 feet for birdie and the mega-million lottery ticket.

“I just want America to know this has been some awful golf,” said the peerless Charles Barkley, a member of the telecast’s announcing crew, who even added the adjective “crappy” to describe the play.

Earlier in the day Barkley’s pre-game booth-mate Samuel L. Jackson offered his own take on what to expect. “Nobody paid to see the Babe [Ruth] bunt, you have to hit home runs today,” he said. It was a prophetic take with both players playing their version of small ball most of the day.

The event also came up short in the shade department. What was billed as the ultimate “smack down” turned into a grind, with both players slipping into familiar competitive patterns as the match progressed.

“This is the kind of banter that we have when we play practice rounds. We give each other the needle the entire time,” Woods said. “Today was a little bit different because we had banter here and there. I don't know about Phil, but I got lost in the competition of things.”

Some of that had to do with the limited number of “challenges” each player was allowed to offer. Sources close to the event said that was dictated by the PGA Tour, which limited the duo to just four side bets, which totaled $800,000 and went to various charities.

But what the event lacked in compelling play and entertaining trash talk was offset by what the cozy member-member could mean for professional golf.

Following the U.S. Supreme Court’s ruling in May striking down a federal ban on sport betting, Tour officials took a keen interest in how The Match integrated the “in-play” gambling aspect into golf. Throughout the day the winning odds fluctuated wildly, with both players coming down the stretch at even money, and the various prop bets also gained momentum with neither player ever taking more than a 1-up lead.

There was also an underlying sense that this was only the beginning. Many involved with The Match envision the event becoming an annual staple with a limitless collection of would-be challengers – from Tiger playing Hideki Matsuyama in Japan to Lefty matching up against the likes of Justin Thomas.

Those involved plan to take some time to read the room before committing to another Match, which is probably prudent given the push back from some fans who balked at the $19.99 tab to watch the event on pay-per-view and reports of technical difficulties for some who purchased the event that prompted officials to air it live and for free online.

“I think we need to wait and see how people liked it or not,” Mickelson said. “This was really fun for me, some of the most fun I've had on a golf course being able to play with [Woods], against you, compete, side challenges.”

It was clear that there is plenty of room for improvement and any sequel would undoubtedly require plenty of nips and tucks, but for all the short comings there was no denying that this was different. The event didn’t revolutionize professional golf but it certainly created opportunities that the traditional model of 72 holes of stroke play simply cannot.

This was a show situated just 30 minutes from Las Vegas’ famed Strip – less sporting event than it was an occasion. Exactly what you would expect in this town. 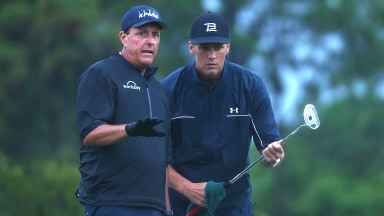