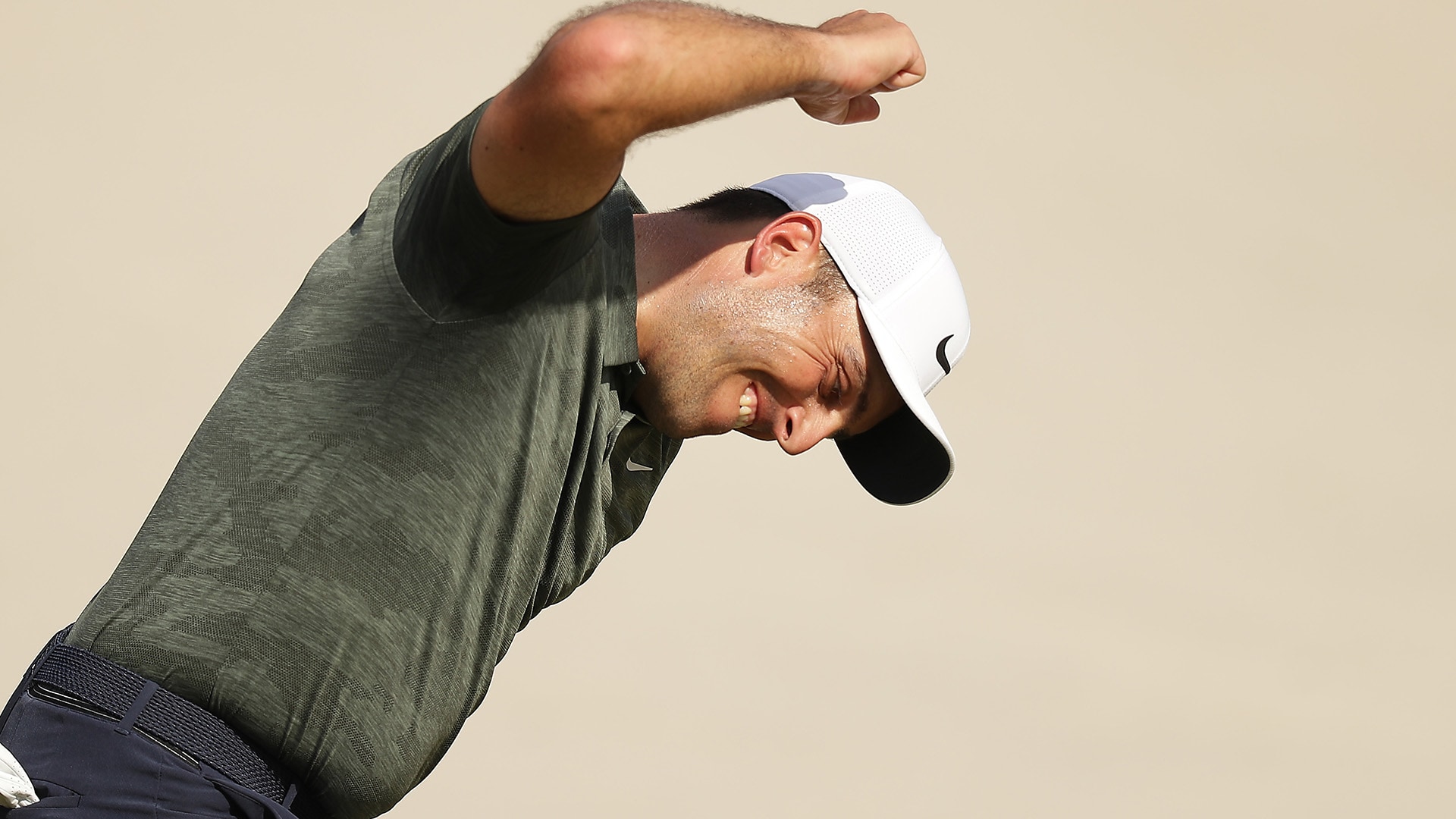 Just like Rory McIlroy last year, Francesco Molinari fired a final-round 64 to storm from behind and steal the Arnold Palmer Invitational. Here’s how Molinari walked away with the title and slipped into a red cardigan:

What it means: This is Molinari’s fourth worldwide win in the last 10 months and his first since his Open triumph last July at Carnoustie. Five back to start the final round, he poured in four front-nine birdies to make the turn in 32. Playing a good seven holes ahead of the final pairing, Molinari continued his charge with back-to-back circles at 12 and 13. He very nearly made a hole-out albatross and then a 44-foot putt for eagle at the par-5 16th but instead settled for his seventh birdie when his bid for a 3 came up one roll short. The leader by one with one to play, Molinari’s approach to the final green finished 44 feet left of the back-right pin, leaving him this left-to-right swinger:

It was the exclamation point on a bogey-free round of 8 under that gave him the clubhouse lead by two. He spent the next two hours waiting out the rest of the field, who proved powerless to pass him.

Round of the day: Molinari in the final round hit 12 of 14 fairways and 14 of 18 greens. He was 4-for-4 scrambling and took 25 putts. He was nearly eight shots lower than the final round scoring average of 71.9.

Best of the rest: Fitzpatrick (71) came up two shots short in his bid for his first PGA Tour title. He made just one mistake, a bogey at the par-4 15th, but couldn't go low enough to take back his lead once he was passed by Molinari. A 13-foot miss for eagle on the 16th hole would have pulled him within one with two to play, but Fitzpatrick instead settled for a two-putt birdie. Once he failed to pull a Robert Gamez from the fairway on 18, it was over.

Biggest disappointment: It was another disappointing Sunday from the defending champion, McIlroy, who finished at 8 under. One back to start the day and hunting his first win since his API victory last year, McIlroy played his first 15 holes in 1 over before pulling even with a two-putt birdie at 16. With two circles and two squares on his Sunday scorecard of 72, he never factored.

Open qualifiers: Three players – Sungjae Im, Keith Mitchell and Sung Kang – punched their ticket to Royal Portrush via the Open Qualifying Series. They were the highest finishers inside the top 10 and ties who were not already exempt into the year’s final major.

(Non-Molinari) Shot of the day: Adam Long cut the corner at the par-4 10th with a 355-yard drive that found the front-left bunker. And then he holed out for a 2:

That's one way to make eagle. 🦅

It was one of two back-nine eagles for Long, who jumped into a tie for 11th with a final-round 67.

Quote of the day: "Incredible. It's high up there with best wins I've had. Arnie was a special player, but most of all a special person and really a global icon for the game. For someone like me, coming from Italy, him and Jack were up there as gods. To win here is really special." — Molinari