A golf broadcast during a pandemic: How NBC is producing Driving Relief

To get live golf back on TV for the first time since the coronavirus pandemic, three critical questions needed to be answered.

How to raise money safely?

How to play golf safely?

And how to produce TV safely?

The golf aspect was covered by the local and state outdoor regulations, with the PGA Tour’s Ryan Hart serving as the tournament director.

All that was left to determine was how to produce a live, four-hour telecast (airing on NBC from 2 to 6 p.m. ET Sunday) at famed Seminole Golf Club in Juno Beach, Fla., that features McIlroy, Dustin Johnson, Rickie Fowler and Matthew Wolff competing in a two-man skins competition.

Produced by PGA Tour Entertainment, the TaylorMade Driving Relief match will – in a sign of the times – feature commentary from three separate locations. NBC’s Mike Tirico will host the coverage from his home office in Michigan, while Rich Lerner, Paul Azinger and Gary Koch will provide play-by-play from the Tour’s production facility in St. Augustine. Theirs will be a unique setup to comply with the CDC’s guidelines regarding social distancing: Positioned more than six feet apart in a studio, the broadcasters will still be able to maintain eye contact to receive nonverbal cues. Roving the grounds at Seminole will be Steve Sands (likely on each tee, setting up the stakes) and Jerry Foltz, who will be following the action from the fairways.

Following only four players, the telecast is able to be shot with just six cameras and produced exclusively with LiveU, which relies on area cellphone towers, instead of RF technology and a production truck. This decision dramatically reduces the footprint at Seminole – 28 production people are planning to be on-site, compared with a typical NBC production that requires 100-plus personnel. An airplane camera will also be used to follow the ball in-flight and provide a different vantage point of the Donald Ross gem, which often ranks as one of America’s top courses, but on Sunday will be making its television debut.

“There’s an intimacy that viewers are really going to enjoy,” said Tom Knapp, Golf Channel’s executive vice president of partnerships and programming. “They’re going to take a stroll for 18 holes at Seminole.”

The TaylorMade Driving Relief will mark the first live golf telecast in the U.S. since mid-March, when The Players Championship was canceled because of the coronavirus pandemic. Golf Channel will offer shoulder programming for the event, with a 30-minute Golf Central Pregame (1:30 p.m.) and Postgame (6 p.m.) show live from its Orlando studios.

Following NBC Universal’s guidelines for a return, there will be a minimum employee footprint working on the studio shows. That means a total of 20 talent and production folks – or less than half a typical show – with other supporting cast working from home.

“The sporting world knows that certain things are going to be different moving forward, and that’s OK,” Knapp said. “There’s an acceptance in that. It’s happening across all sports. There’s no question there will be some key learnings picked up at Seminole that we’ll carry forward.” 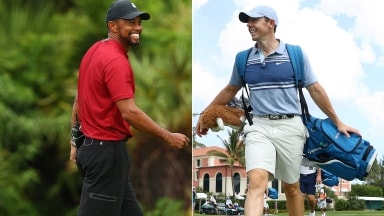 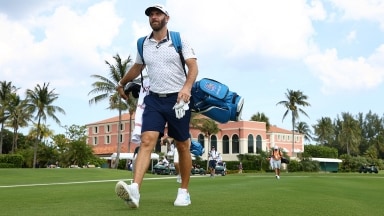 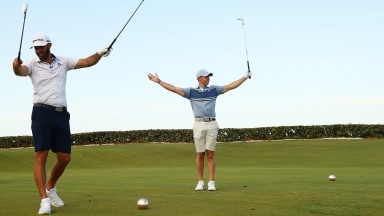