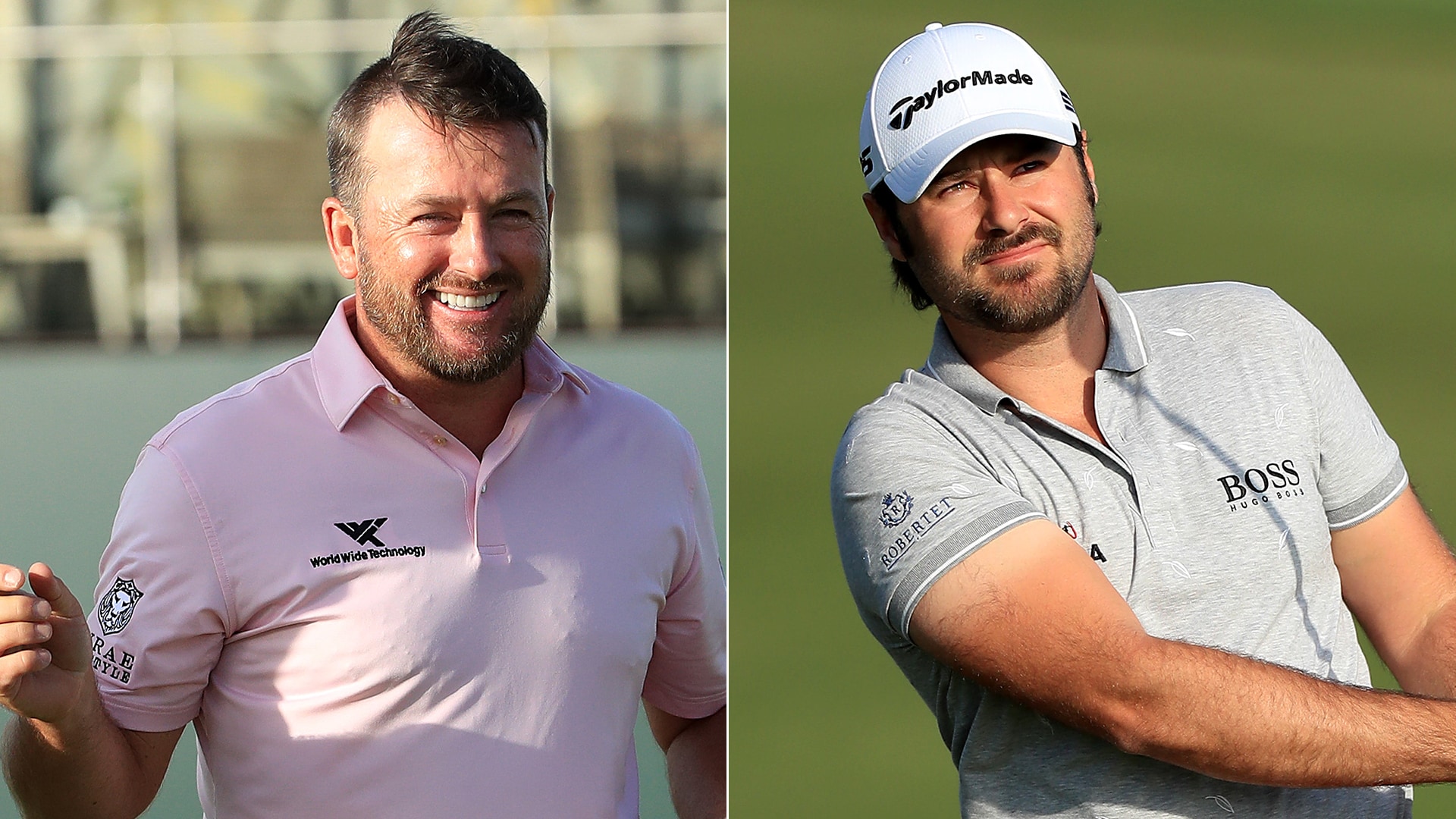 On Sunday, the two players will face off in the final group at the Saudi International.

McDowell leads Dubuisson by a shot following a third-round, 4-under 66 at Royal Greens Golf and Country Club. Dubuisson, who sits at 11 under, posted a bogey-free 65.

"We haven't played together since the Ryder Cup," said Dubuisson, who will tee off Sunday at 4:50 a.m. ET alongside McDowell. "I'm very happy to play with him tomorrow."

McDowell, beginning the day in the penultimate pairing, came alive with four birdies on the back nine, including Nos. 12 and 13, where he made back-to-back birdie putts from off the green.

"I always tell my kids we live in a nice house because daddy can putt," McDowell said, "that's about the heart of it, really. The putter's been a little ice cold the last sort of two rounds, but I got it heated back up on the back nine today and I'm going to have to putt well to have a chance tomorrow."

Dubuisson made a pair of lengthy birdies, at Nos. 12 and 14, to pull even with McDowell, but the Northern Irishman got up and down for birdie at the par-5 finishing hole to create a one-shot cushion entering Sunday. Gavin Green is solo third at 9 under, three shots behind, while Dustin Johnson is part of a three-way tie for fourth at 7 under. Brooks Koepka and Phil Mickelson are among those at 6 under.

At No. 104 in the world, the 40-year-old McDowell is poised to yet again climb back inside the top 100 in the world after this week. A victory, though, would catapult him into the thick of the European Ryder Cup conversation (he is currently 38th on the world points list).

McDowell hasn't played a Ryder Cup since that 2014 edition.

The same can be said of Dubuisson, though while McDowell won as recently as last year, the 29-year-old Frenchman has practically disappeared in recent seasons. After rising to No. 15 in the world in 2014, Dubuisson missed 32 weeks in 2018 after undergoing surgery for a perforated left eardrum, and he has just one top-10 finish since while dropping to No. 478 in the world.

After a missed cut last week in Dubai, Dubuisson decided to switch back to the TaylorMade set he used before his injury two years ago.

"I had a long chat with my coach after Abu Dhabi because it was the first time he came to the whole tournament, so he saw me play the whole four days and he said, 'It's not possible, your swing is good. Last year your swing was very good, it's not possible that you hit the ball like this,'" Dubuisson said. "So I decided to take my old set of clubs ... and I found my game into the wind again, so I'm quite happy now."

McDowell is expecting a final-round battle as if it were 2014.

"We shared a car up to the course this morning and I was chatting with him and I always look out for him, great experiences with him in 2014 at Gleneagles," McDowell said. "He's such a great guy, he hasn't had the best form the last few years and I'm really, really happy to see him at the top of the leaderboard and looking forward to being with him tomorrow.

"It's going to be tough to try and play tough against him, but we're both competitors and we'll go out there and try and do our job."