'He's never going to stop': This is just the beginning of the DeChambeau revolution 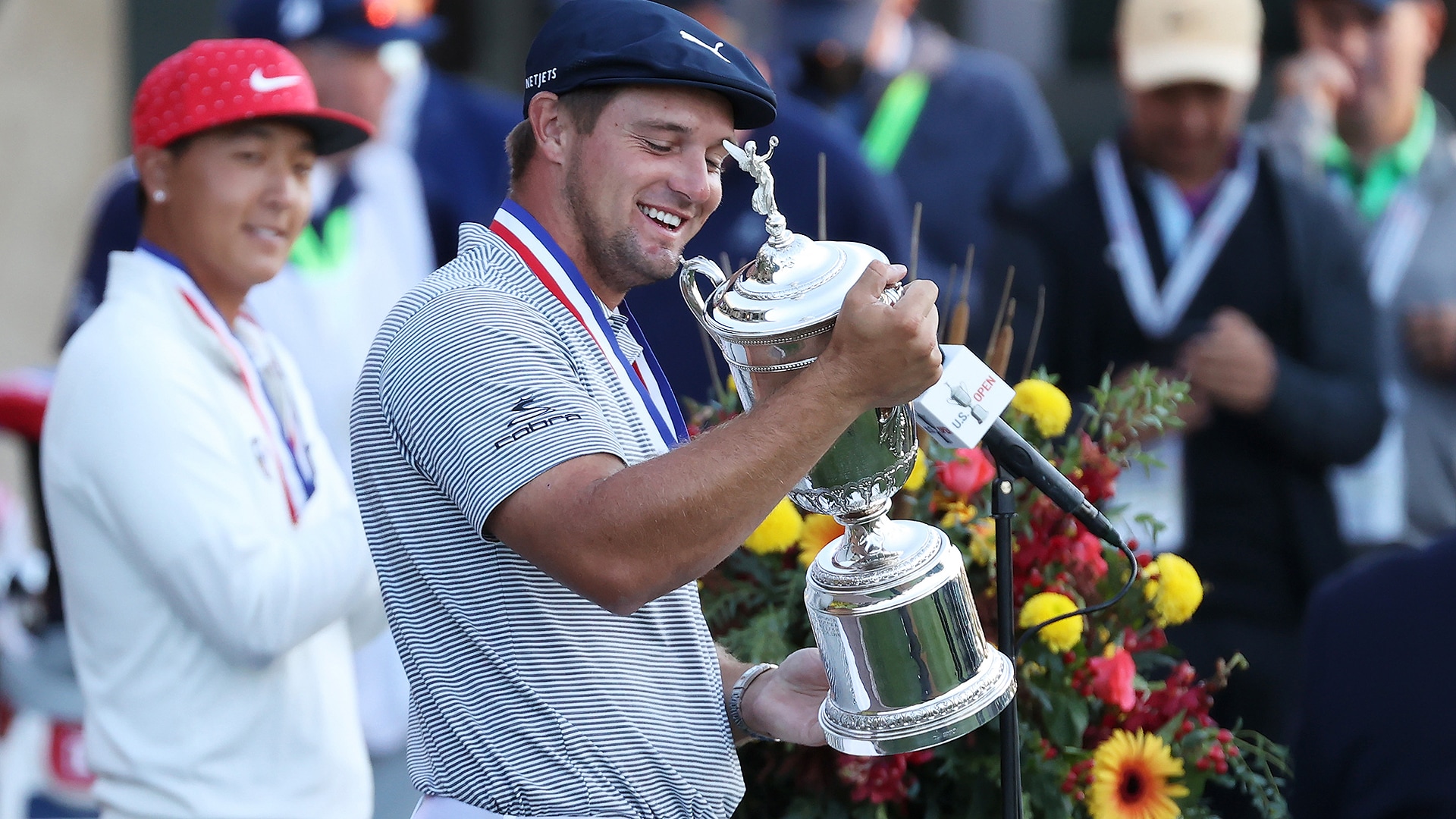 MAMARONECK, N.Y. – Six hours of practice and play wasn’t enough to satiate him. Even on U.S. Open Saturday, after jousting with one of the most historically difficult courses on the planet, he still craved more.

Every player unwinds differently. A sweaty gym session. Thirty minutes of meditation. A cocktail or three. But not Bryson DeChambeau. In search of comfort, or understanding, or that elusive sense of satisfaction, he beats balls. Even if that means he’s on the range, under floodlights, in 50-degree temperatures, until 8:15 p.m. after the third round of golf's most grueling test.

“He loves it,” said his caddie, Tim Tucker. “His perfect day is hanging out on the range and hitting balls. He doesn’t play golf. He plays golf in tournaments.”

A trophy – even the 8 ½-pound sterling silver one from 1895 – is merely a byproduct of all that hard work. That’s why DeChambeau was beaming Sunday as he talked in a socially distanced, outdoor news conference here at the 120th U.S. Open, his sponsored protein shake and a celebratory glass of chocolate milk nearby. The hours of grinding – the thousands and thousands of hours of grinding – had paid off.

On a brisk, blustery day at Winged Foot, DeChambeau made just a single bogey and carded a 3-under 67, the low round of the day by three and a score that was nearly eight strokes better than the field average. Earlier this month, after playing this behemoth in a practice round, world No. 2 Jon Rahm predicted no one would finish 72 holes under par, or if someone did, he’d win by a lot. Indeed: At 6-under 274, DeChambeau was the only player under par and he won by a lot – by six over Matthew Wolff. It was the most lopsided margin of victory in a major since 2014.

“There’s a lot of people in here saying what he’s doing is pretty exceptional,” said Wolff, who closed with 75. “To watch it firsthand, I have to agree.”

And to think, at the onset of the week, many smart golf people scoffed at DeChambeau’s approach. Wail away on driver? Fuhgeddaboudit! This is the U.S. Open. Fairways and greens. Patience. Maturity. Discipline. Rahm seemed to invite the carnage, saying of a “Massacre No. 3” at Winged Foot: Bring it on. (He shot 10 over.) The opening-round setup was a kinder, gentler form of torture, with 21 players breaking par. Scoring was 2.69 strokes higher on Day 2, the highest single-round jump in tournament history. And then lighter afternoon winds Saturday allowed Wolff, a U.S. Open rookie, to fire a 65 and take a two-shot lead heading into the final round.

After 54 holes only three players remained under par, but the amount of punishment exacted didn’t feel like enough. We’re a bloodthirsty bunch, rooting for carnage, hoping the best players in the world suffer like all of us would. But Massacre No. 3 never came, not until late Sunday when the greens had that familiar sickly sheen. By then it was too late. DeChambeau and his team had outsmarted them. Again.

Winged Foot’s fairways were so narrow and firm, no one hit them with regularity. The best strategy, then, was to launch with driver with reckless abandon, leaving the shortest club possible and letting a steep angle of descent stop approach shots from the four-inch rough. DeChambeau figured that out days before everyone else. Though he hit only 41% percent of the fairways, he was still slightly better than the field average (39%). And his misses weren't penalizing: He ranked third off the tee, gaining more than five shots on the field.

But a debatable setup was only part of the equation this week. The game has changed in innumerable ways since the Open was last held at Winged Foot in 2006. Scoring averages have dipped. Athletes like Dustin Johnson and Brooks Koepka and, now, DeChambeau have emerged. Technological advancements have underpinned the power game: golf balls that curve less; drivers that soar higher without spin; launch monitors that allow a player to optimize his swing for peak performance. “The game has just moved on a little bit,” Rory McIlroy said, “and everyone has collectively just gotten a little bit better.”

Instruction has evolved, too. Just look at the two protagonists of this U.S. Open. As a junior player, Wolff’s unorthodox swing was immediately dismissed. Then he met George Gankas, the flat-bill-wearing SoCal teaching savant. Gankas’ initial impression of Wolff’s move? “This is sick,” he said. “I said, ‘F--- it, I’m not changing this kid.’” Fueled with self-belief, Wolff became a star junior, an NCAA champ and, at age 21, already a very rich man. 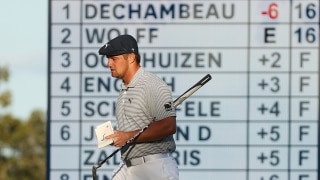 DeChambeau has charted an even more unusual path. When he was 15, he began studying Homer Kelly’s “The Golfing Machine,” a teaching manual that allows a player to build his own swing with 24 components and 144 variations. He cut irons and wedges to the same 6-iron length, slapped on some XL grips and used a torque-balanced putter. He soaked golf balls in Epsom salt and wrote cursive backward and left-handed, an attempt to improve his fine-motor skills and increase his brainpower. As his longtime coach Mike Schy once said: “At times it was a bit scary, because he wanted to try things. But it wasn’t drugs or anything. It was just a golf swing.”

College coaches were in awe of his robotic ball-striking capabilities but turned off by his many quirks; DeChambeau chose SMU, in large part, because the coach at the time, Josh Gregory, vowed to let Bryson be Bryson.

Now 27, he’s already reinvented himself countless times over his career.

An erratic iron player, he switched on his own to single-length irons and became a ball-striking machine.

A terrible putter, he tried every model and method – even sidesaddle, the ultimate sign of desperation – before settling on this rigid, armbar motion that made him a top-10 putter on Tour.

And now, an above-average driver, he embarked on one of the most ambitious transformations in golf history, rebuilding his body and overhauling his game, packing on 40 pounds to become a brawny basher. For the first time this week, DeChambeau admitted that the impetus for the change came at the 2019 PGA Championship. It wasn’t just Koepka’s length that won him a fourth major in three years – it was his strength, as he muscled misses out of Bethpage Black’s thick rough and back into position.

Still, DeChambeau’s curiosity came with some risk. He was an accomplished player already – an NCAA medalist, a U.S. Amateur champion, a five-time Tour winner. He wasn’t scrawny, and he wasn’t short (34th in distance). “There’s been people who change their body and increase clubhead speed and lose their game,” said another member of DeChambeau’s coaching staff, Chris Como. “That was a very real possibility. So we needed to know his previous baseline; that way, if he got lost, he knew how to get back to that. You don’t want to mess up something that’s already pretty great.”

His team of swing instructors and trainers and neuroscientists developed a plan, and then DeChambeau ate ... and ate ... and ate: Four eggs, five strips of bacon, two protein shakes; peanut butter and jelly sandwiches, bars and more shakes; steak and potatoes, with two more shakes for dessert. He tested. He cranked up his swing speed, to 125 mph to 130 to 135 and beyond. During the 3 ½-month shutdown this summer, Como transformed his living room into a laboratory with a hitting net, putting green, force plates and 3D motion capture. DeChambeau worked out, endlessly, relentlessly, twice a day, proudly uploading all of his gains on social media. Then he ate some more, now up to 235 pounds on his 6-foot-1 frame.

Though he’s a polarizing figure, though he’s memed and mocked, DeChambeau is also easy to admire. Greatness is hard work, and he puts in the time. Early in the morning, late at night, he finds salvation on the range.

“He sacrifices everything for this game,” Tucker said. “All he’s done his whole life is try to be the best. They tell you, ‘Oh, you can do anything.’ But what they don’t tell you is you have to sacrifice everything to be great.”

So, hey, tip your Hogan cap: DeChambeau set an ambitious goal and achieved it. He led the Tour in driving distance (322.1 yards) this past season and gained more than a stroke per round on the field off the tee, tops on Tour. He won a tournament, contended in several others and positioned himself to win the first two majors of 2020 (after entering the year with no major finish better than 15th) despite setups that were supposed to discourage his aerial attack. “It’s definitely validating,” he said.

McIlroy was paired with the new-look DeChambeau during the PGA Tour restart event in June and thought he could do some damage on the Tour’s soft, benign setups.

“I said, ‘OK, wait until he gets to a proper golf course, and he’ll have to rein it in,’” McIlroy said. “This is as proper as they come, and look what’s happened.”

Yes, look: DeChambeau on Sunday erased a two-shot deficit in four holes. He became the first U.S. Open champion since 1937 to make an eagle in the final round. And even with all of the pressure of trying to close out his first major while battling a course on the brink, he shot 1 under coming home, including a 7-foot par save on the 72nd hole, when he triumphantly threw his arms in the air. So complete was his performance throughout the bag that he finished inside the top 3 in strokes gained: off the tee, approach and around the greens.

“For me, it’s about the journey of: Can I execute every shot more repeatably than everybody else?” he said. “I was able to do that this week.”

Of course, DeChambeau’s runaway victory will resonate with more than just the roughly 300 people who gathered around the 18th green to salute the newest champion. The governing bodies have vowed to crack down on the alarming distance trends; DeChambeau’s tour de force, and the absurd lines he may soon take at Augusta National, figure to accelerate those discussions. A reckoning is upon us, because a classic course with a ferocious setup was no match for his sizable talents.

Hardwired to chase what’s next, DeChambeau is already looking ahead to new areas of exploration. A 48-inch driver. Ball speed consistently in the 200-mph range. Laser wedge play.

And why not? An empty range, another perfect day, awaits.