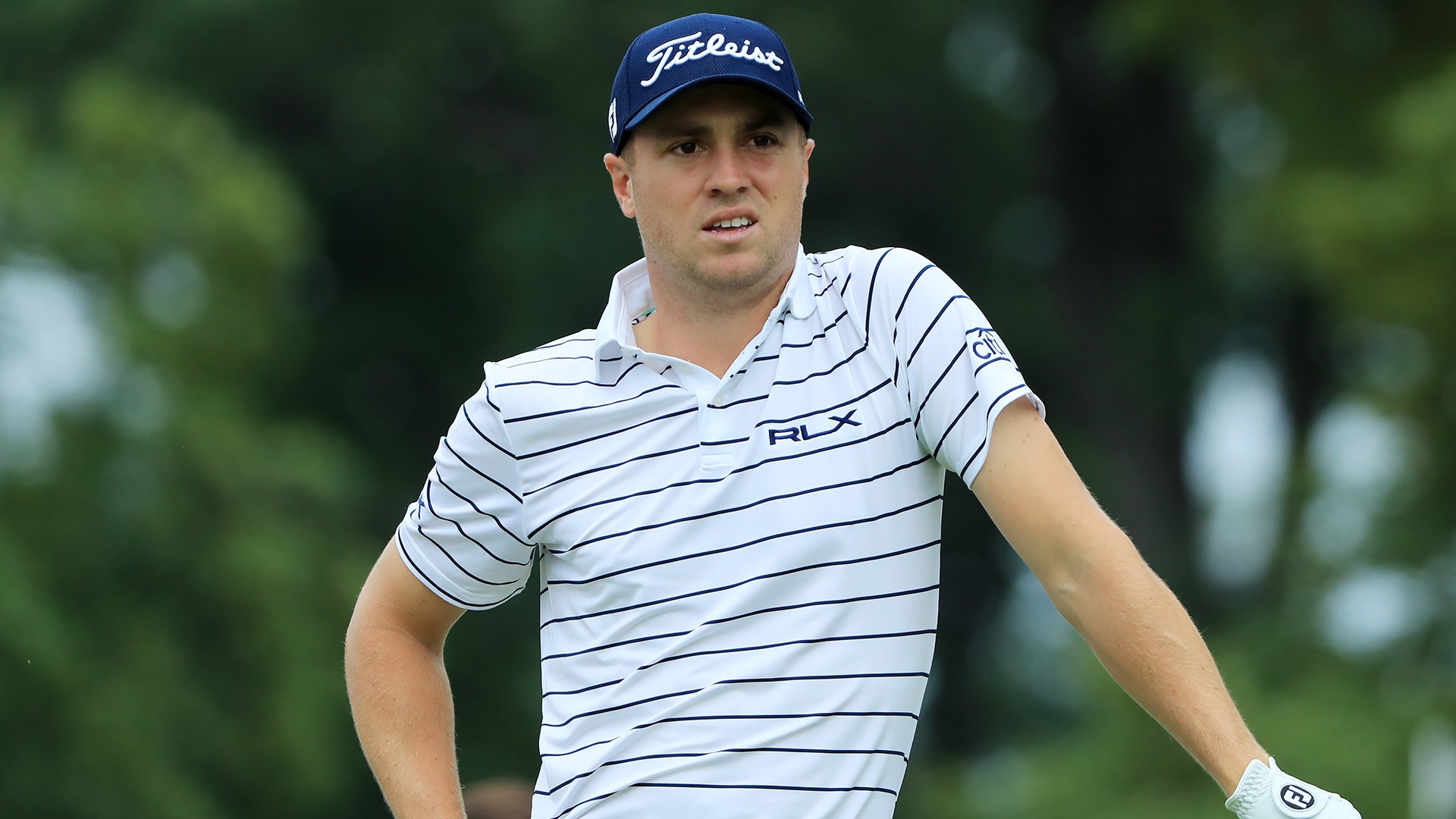 MEDINAH, Ill. – Justin Thomas felt like he was “due.”

Due evidently means a course-record 61.

Thomas tore apart a vulnerable Medinah Country Club on Saturday at the BMW Championship, carding eight birdies, two eagles and a single bogey to shoot 11 under in the third round and push his way to 21 under for the week, six clear of his nearest pursuer, Tony Finau, through 54 holes.

“You don't know when something like this is going to happen, a round like this,” Thomas said. “We've all been talking the last couple of weeks that I'm due to have one, and it's nice when it happens.”

Saturday marked the third time Thomas has shot 61 on the PGA Tour and the third time he’s been double digits under par in a single round. That second stat includes his 59 from the 2017 Sony Open in Hawaii.

“It doesn’t matter what golf course it is. You give us soft, good greens and soft fairways, we’re going to tear it apart. It’s just how it is,” he said.

“I mean we’re just that good. You know what I mean? It’s just the fact of the matter.”

Yeah, PGA Tour pros are good, but only one guy is six shots better than everyone else this week. And only nine players have ever gone sub-60 in the Tour’s history. Thomas, more than most, has a unique ability to catch fire and remain ablaze.

He opened his third round with five consecutive birdies. Hours later, he played a four-hole stretch, Nos. 14-17, in 4 under. On three of those holes, he needed one combined putt, the product of a chip-in for birdie at 14 and a holeout from 180 yards at 16.

“I just got really like – I don’t know. Sometimes you get going out there, you get the goosebumps,” he said.

The only time he felt rattled all day was when he was studying a putt on the par-5 10th.

“Really random. Honestly, there was this guy, I put my ball down and when it was down, he yelled, ‘Noonan,’” Thomas said. “And I was scared that he was going to say something while I was putting, and I was like, ‘Man, does this guy hate me?’ I was just terrified he was going to do something.

“Luckily, he didn’t and I made the putt.”

“That 3-wood at Erin Hills was a little better,” he joked.

Paired with Thomas on Saturday was Finau, who shot 4-under 68 and lost by seven. He played his first 5 holes in 3 under par with a birdie and an eagle and he was somehow already two down. Thomas should be paying him some kind of retainer.

Through 54 holes at Medinah, the scoring average is 69.76, making the actual par about 2 under. Only two players in the 69-man field are even par or worse. But only one player has fired the course record twice. Thomas tied the previous best of 65 on Thursday. Hideki Matsuyama had a record 63 all to himself for exactly one day before Thomas bested him by two.

Up six, Thomas has only one goal for Sunday. “I’m just trying to get my lead to seven,” he said. “I want to hit it on [No.] 1 tomorrow and hit a wedge in close and make birdie to get to seven.”

Winless this season and hampered by an injured wrist in the spring that kept him out of the PGA Championship, Thomas is 18 holes from victory at the BMW Championship and a two-shot lead at next week’s Tour Championship. As it stands, he’ll be the frontrunner to win the FedExCup. If he were to win it again, as he did in 2017, he’d join Tiger Woods as the only players to capture the season-long title twice in its 13-year history.

“I couldn’t care less. I’m just worried about trying to win this tournament tomorrow,” Thomas said, confining next week to next week and Saturday to Saturday.

“At the end of the day, this round was great, but it’s over with and I need to go focus on tomorrow.”