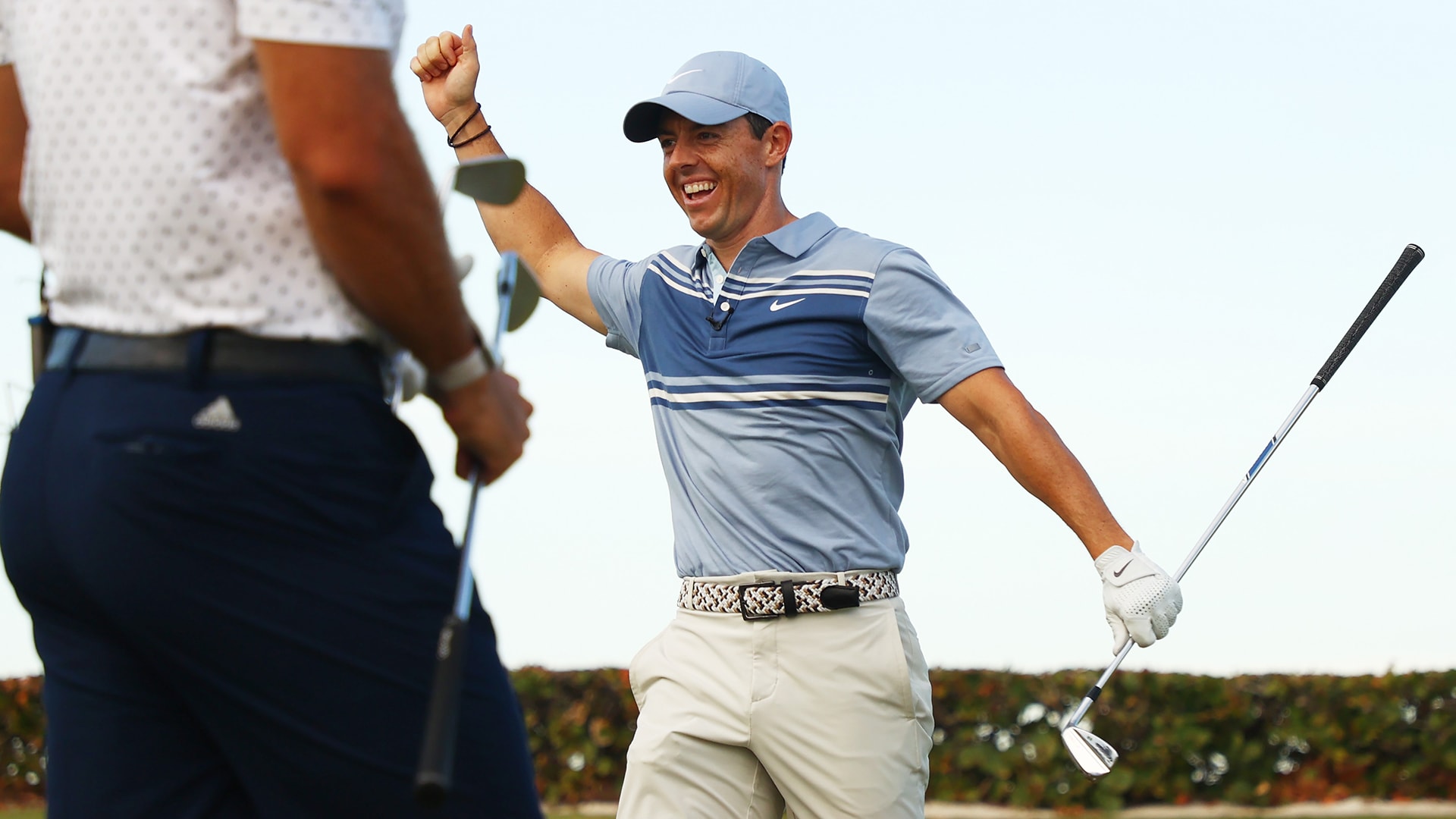 Live golf returned for a good cause Sunday at Seminole Golf Club, and it was Rory McIlroy and Dustin Johnson winning the TaylorMade Driving Relief.

McIlroy and Johnson trailed Rickie Fowler and Matthew Wolff for much of the day, but with $1.1 million of remaining skins up for grabs on the tie-breaking hole, a 125-yard shortened version of the par-3 17th, McIlroy stepped up and hit his tee shot to 10 feet to win the closest-to-the-pin tiebreaker.

We tracked the match, hole by hole, all day. Here's how it all unfolded:

The remaining $1.1 million in skins will be decided back on the par-3 17th hole in a closest-to-the-pin competition from just 125 yards. Wolff goes first and mentions to Fowler he's between clubs. "You've gotta hit a shot here, just being honest," Fowler said. "Show me something." He does, ending up about 12 feet away. Fowler then blades one badly right of the green. Johnson is up next and misses the green short and left. Now, it's McIlroy's turn and he hits it pin high, just inside of Wolff's, to win the match.

We're past 6 p.m. at Seminole and we've got one hole left – a hole that happens to be worth seven figures. Wolff is in the bunker off the tee, but Fowler hits a beauty down the pipe. McIlroy and Johnson are both in the fairway, too. Fowler misses the green while Wolff gets his safely on, though a ways from the hole. That's when Johnson hits his best shot of the day, on line and about 12 feet short of the hole. McIlroy follows by giving himself a mid-length birdie look. Wolff gives his putt a great run, but it's about two rotations from curling right into the hole. McIlroy's putt stays left and misses. Now, it's up to Johnson, and he misses.

One of the best par 3s in the world. $600,000 in skins on the line. This will be good. McIlroy and Wolff are in the sand while Johnson and Fowler have mid-length looks at birdie. Johnson doesn't come close to making his birdie putt, but Fowler comes within inches. With Fowler in with a tap-in par, McIlroy and Johnson have some meat left for their pars. McIlroy makes his and we move on to the 18th hole, which will be worth $1.1 million.

This hole is worth, gulp, $400,000. Wolff takes an aggressive line on this dogleg right and drives it into the front-right greenside bunker.

McIlroy finds the front-left greenside bunker. Fowler is safely back in the fairway, playing the hole the way Donald Ross originally intended, while Johnson looked to have yanked his three fairways over. McIlroy puts the pressure on by nearly holing his bunker shot, though Wolff hits his to about 4 feet.

He'll have a tester to tie the hole and avoid McIlroy tying things up. And he makes it.

Last par 5 of the day, and $300,000 worth of skins is on the line. If Fowler and Wolff win this, McIlroy and Johnson will have to win the last three skins to win the match. While three guys find the fairway, Johnson is likely out of another hole after rinsing his tee ball, his third water ball of the match.

Fowler goes driver off the deck to lay up with his second shot.

McIlroy tugs a 3-wood. And Wolff, with 269 yards left, just misses the green short and right, leaving himself plenty of green to work with. He doesn't hit a good chip, though, and misses his birdie try, leaving Fowler to have to make his from 12 feet. He misses just right, though McIlroy, with 6 feet for birdie, lips out another birdie putt. Skins carry over again.

We have another long-drive hole, this one worth $350,000, and the ball does not need to be in the fairway. Wolff demolishes his drive to lead things off (368 yards) and no one comes close to matching.

Johnson and Fowler miss the green left, while McIlroy and Wolff find a similar spot in the middle of the green. They'll each have about 30 feet for eagle. Neither putt falls and the hole is tied with birdies.

One of the most picturesque holes on property, with the ocean in the background. Coming off three birdies in four holes, Fowler finds the front right bunker. The other three miss the green, too, though Wolff and McIlroy are on the fringe. No birdies here, and the skin carries over after McIlroy gets in for a matching par.

Here's another short par 4 with a tough green complex – though apparently not for these guys. Fowler sticks it to a few feet. Johnson lands it close, too, before his ball spins back to about 10 feet. Wolff is about 7 feet away and McIlroy, hitting last, leaves himself a few feet, as well. After Johnson and Wolff miss their birdie attempts, McIlroy has a brutal lip-out. Fowler makes him pay, rolling in another birdie.

Wolff and Johnson miss well right, though Johnson's finds the water. Fowler and McIlroy hit their drives on strings. Johnson picks up while the other three safely find the left portion of the green. Anything right of this right flag is no good. After Wolff rolls his putt way past and McIlroy barely misses, Fowler drains his birdie from 20 feet to win another skin.

McIlroy lays well back and his approach misses the green left, close to the water. Meanwhile, the other three also play less than driver off the tee and give themselves solid looks at birdie. Fowler and Wolff will each have about 12 feet left while Johnson has inside of 10 feet. McIlroy's lie is brutal and his chip goes 5 feet and doesn't reach the green.

Johnson says, "Don't worry, I got you, partner." He doesn't, though, as he misses his birdie and the hole is tied.

With two skins carrying over, the last hole of the front nine is worth $300,000. As the players hit their tee shots, President Trump dials in for an interview, so we pick things back up on the green. McIlroy leaves his long eagle attempt well short, about 10 feet, while Johnson flies the green with his second and catches a flier with his eagle chip. Neither make birdie. Fowler and Wolff, meanwhile, give themselves short looks at birdie and make both. In one hole, they take the lead.

Wind is making this hole play even longer. Johnson has to hit a hybrid and he barely gets it on the green. "I can't hit my long iron that far," Fowler said before badly hooking 3-wood left. No player gets it anywhere close and the hole is tied with pars.

The skins have doubled, with these next 10 holes worth $100,000 each. Johnson's tee ball runs long and into the water that guards the front of the green. The other three have wedges from around 100 yards and all three wedge it within 12 feet or so, with McIlroy and Fowler each having about 6 feet left for birdie. Fowler makes his, and so does McIlroy. Tie.

This hole may be less than 400 yards, but it's no easy birdie hole, even with players like hitting less than driver off the tee and wedge into the green. McIlroy goes well left off the tee, almost on the fourth tee box, and it gives him a great angle in. He takes advantage, stuffing a wedge to a few feet. The other three have birdie putts, as well, but only McIlroy converts. Another skin for his team.

Seminole flexing its muscles again after giving up an easy birdie to Fowler. No one hits the green. Fowler is in the right trap and Wolff came up well short of the green while McIlroy and Johnson had their tee balls roll off the right side of the putting surface, Johnson's going into the bunker. This is what makes Seminole so tough. No easy up-and-downs here, as even McIlroy can't get within 3 feet putting from the fringe. With Wolff making bogey after hitting a heavy chip, Fowler needs to make from 10 feet. He can't and Johnson's up-and-down par wins another skin.

This is one of the toughest holes on property and the longest of Seminole's par 4s. But Fowler pays no attention, almost jarring an 8-iron from 172 yards. He leaves himself just a few feet for birdie.

Johnson comes up short, Wolff hits it to about 20 feet below the hole and McIlroy is about 18 feet past. Only Fowler birdies and the underdogs are on the board.

With two skins carrying over, this hole is worth $150,000. McIlroy and Johnson are both in the fairway while Fowler and Wolff will have to lay up from the bunker and dunes, respectively. McIlroy comes up short in the front left greenside bunker and Johnson misses the green right. Fowler will have a wedge in, though Wolff, who asked Johnson if he was in a waste bunker, is likely out of the hole after two poor shots from the junk. Johnson gets up and down for a tap-in birdie and puts the pressure on Fowler, who catches the left lip and misses a tough downhill birdie roll from about 12 feet.

Johnson and Fowler are both in the sand. While Johnson finds the middle of the green, Fowler's approach goes long and into the back bunker, as does McIlroy's. Wolff keeps it on the back of the green, about pin high but a good 25 feet away. Wolff two-putts for par for his team while McIlroy gets up and down after Johnson three-putts. After making his short putt, McIlroy chirps at his opponents: "I think you forget I've won two FedExCups."

Here we go! A gettable hole location here, so we should get a birdie or two to start things off. Fowler and Wolff call heads during the coin flip, but it's tails, so McIlroy and Johnson will have the honors. McIlroy and Johnson have the advantage off the tee, but Fowler sticks one to 10 feet. Johnson hits a poor flip wedge, Wolff's wedge from the rough runs through the green and McIlroy wedges one up next to Fowler's ball. McIlroy and Fowler miss their good looks at birdie and the first hole is tied with pars. The $50,000 skin carries over.