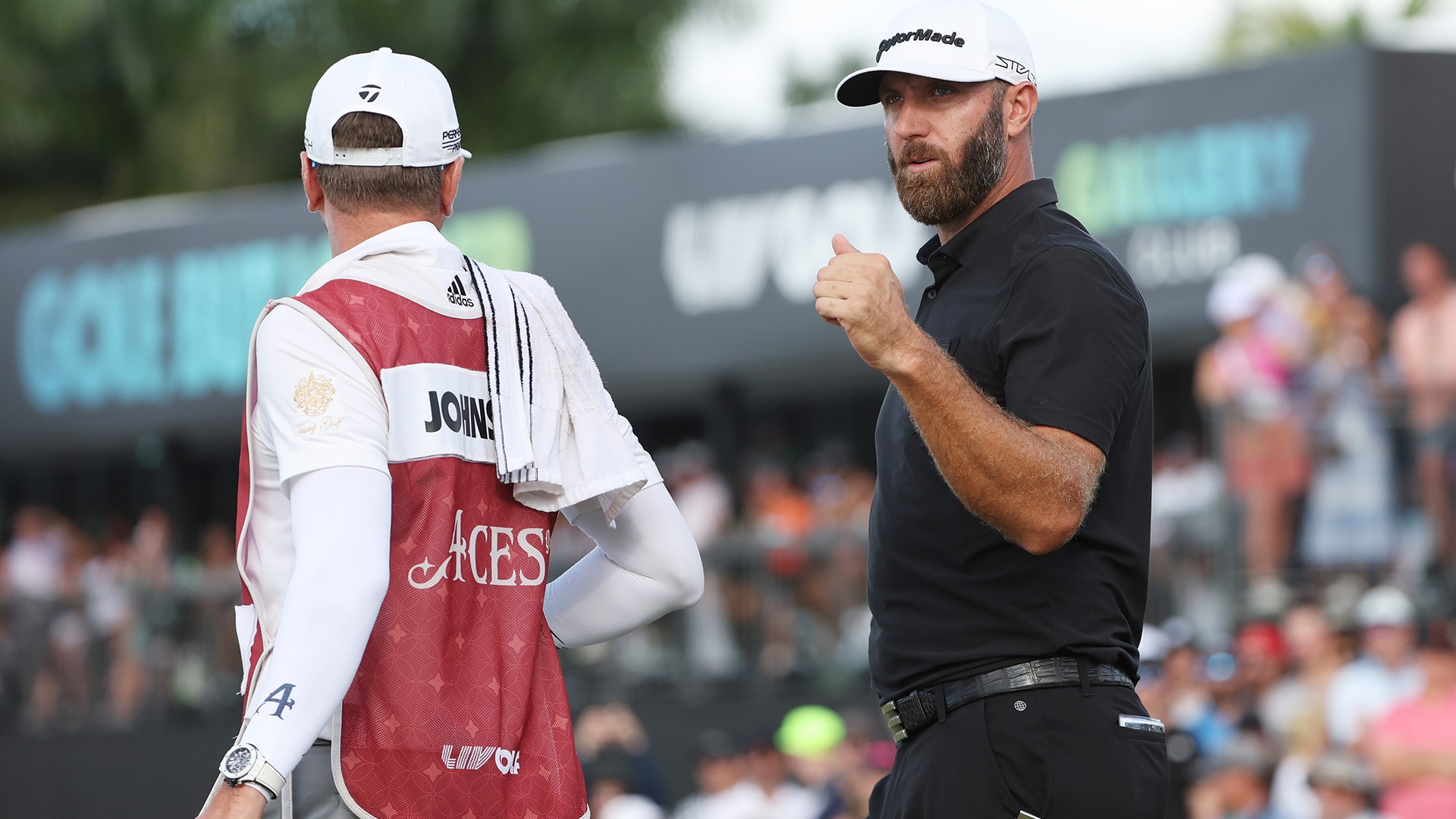 LIV Golf wraps up its inaugural season, Seamus Power takes the next step, The Open vows to remain open and more in this week's edition of Monday Scramble: 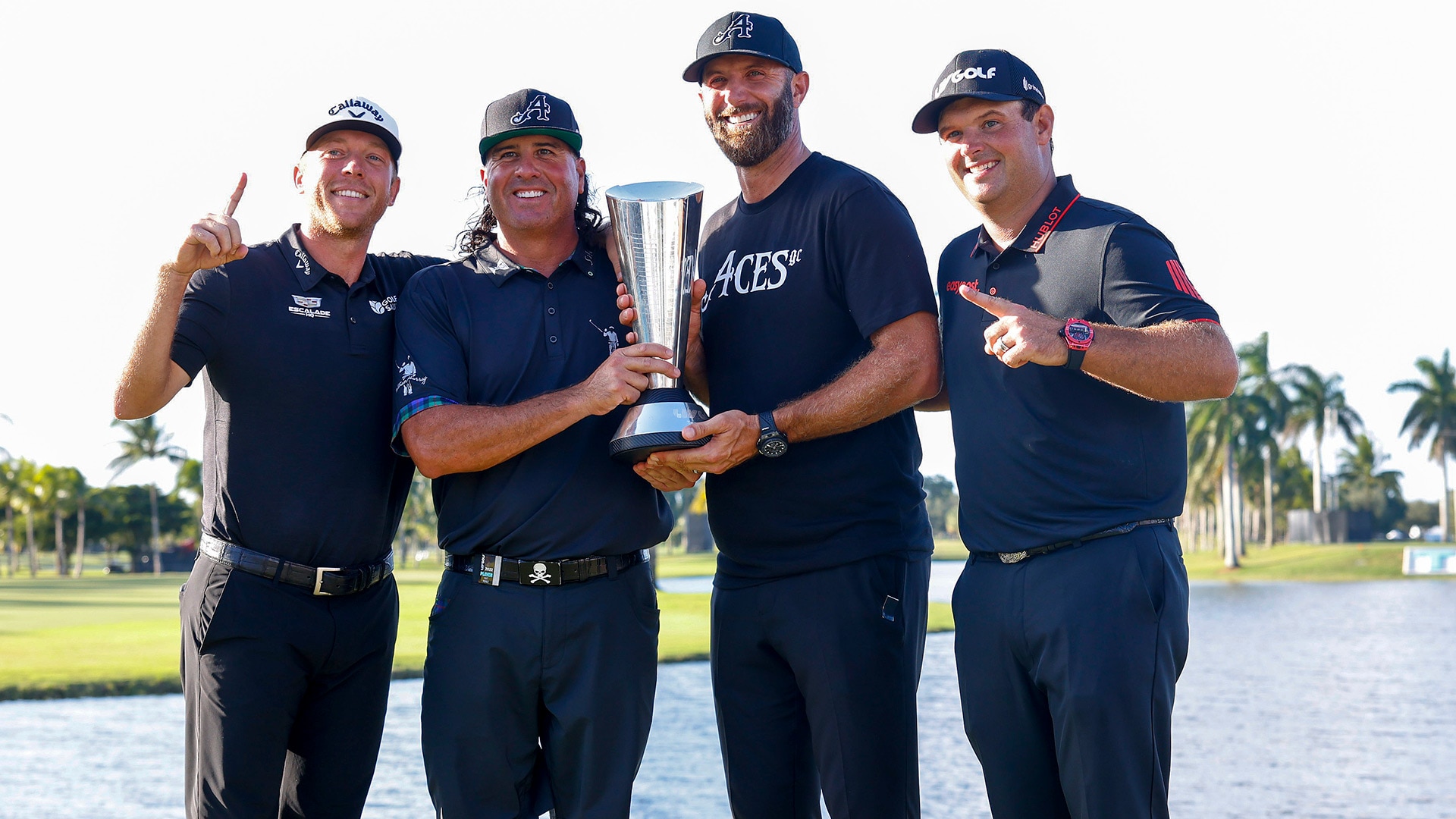 Here was a dream ending to the inaugural LIV Golf season: Dustin Johnson and Cameron Smith battling it out for their respective team’s share of a record $50 million purse.

Smith shot 65 on the final day, the best score by three, a reminder of his prodigious talent at the end of a breakout year that included both The Players and The Open titles. But it was Johnson, arguably the most talented player of his generation, who secured yet another team title.

It was the fourth victory of the season for Johnson’s crew (which also includes Talor Gooch, Patrick Reed and Pat Perez), meaning they evenly split a total of $28.25 million this year. Johnson alone eclipsed $35 million. And that doesn’t even include his reported nine-figure signing bonus. To go along with his nearly $75 million in previous Tour earnings. Plus a decade-and-a-half worth of endorsement money.

So, no, with a perma-smile and uncharacteristically effusive interviews, DJ doesn’t seem to be regretting his decision to leave the PGA Tour. In turn, his instant success has helped give LIV credibility.

In interviews LIV officials have continually stressed that they’re a startup, that this was the beta season, that 2023 represents the first year of the full LIV experience.

To the press on-site at Trump Doral, LIV executives shared their short- and long-term vision. It includes 48 set players, a greater emphasis on the team dynamic, franchises, more big-time signings (the usual names resurfaced in Miami), free agency in the winter.

But for all of the bluster and big promises, LIV still lacks in two main areas that are critical to its viability:

• It doesn’t have a TV deal, so its tournaments are broadcast for free on its website and YouTube, with a disappointing streaming audience that peaked at roughly 75,000 viewers on Sunday. Atul Khosla, LIV’s chief operating officer, told reporters, “We have got to start commercializing the product. We have got to get on TV, we have to get corporate partners. These are milestones that we need to hit.”

• And the events don’t carry world ranking points, which means LIV players will struggle to qualify for the major championships. If LIV events continue to be nothing more than meaningless 54-hole exhibitions for boatloads of cash, well, fans and corporate sponsors will respond accordingly, and it’s impossible to see the venture truly taking off, no matter how much financial backing it has from Saudi Arabia’s Public Investment Fund.

There should be less disruption in 2023. Fewer rumors, less drama.

LIV will have its players. The Tour will have its guys, too. They'll go down their separate paths, the best of each circuit reconvening four times a year at the majors. 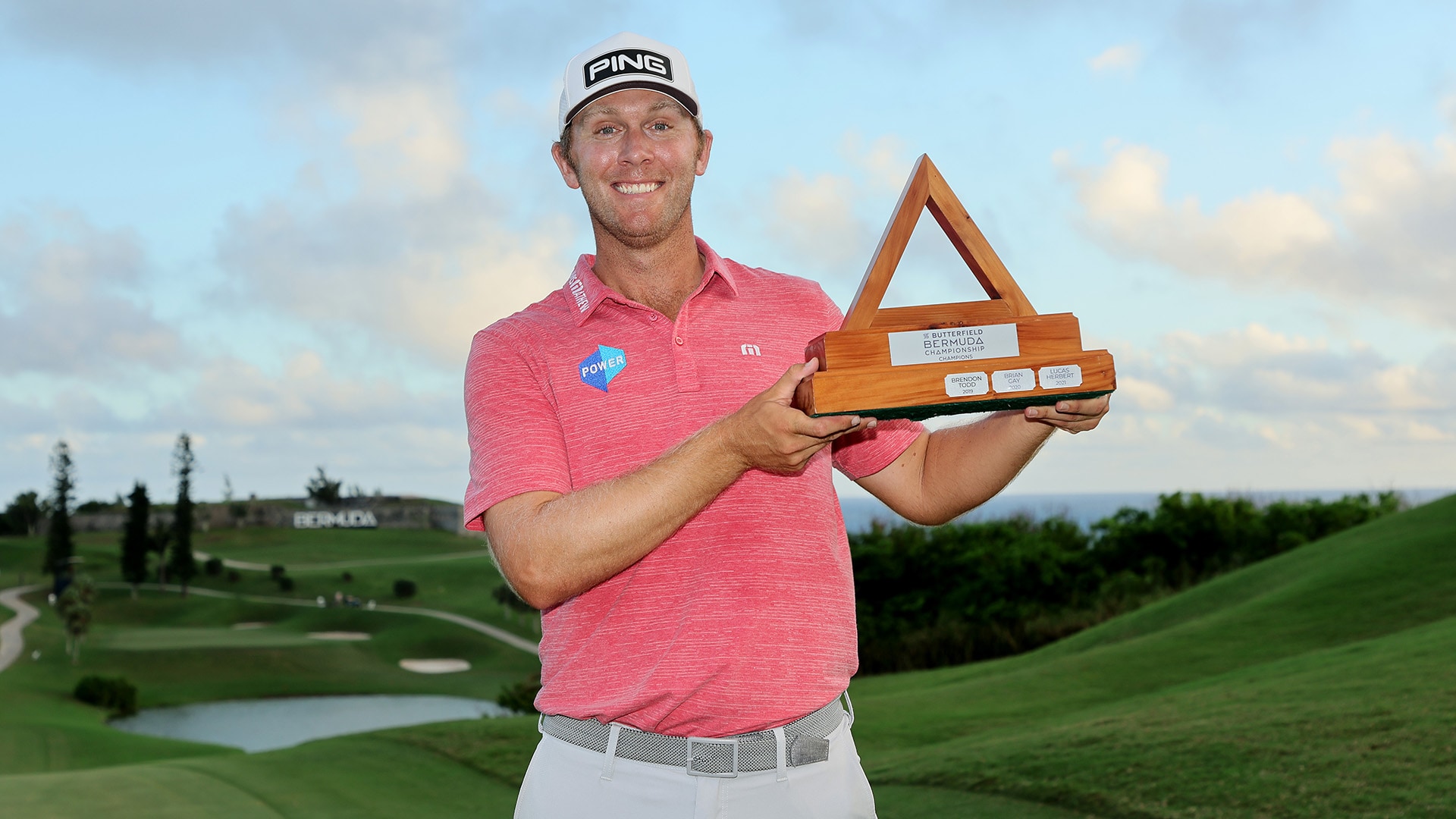 The widespread changes to the PGA Tour schedule have made clear that there are now two tours.

One for the upper class. Another for everyone else.

The Bermuda Championship falls in the latter category, a place for the rookies to find their footing, for the veterans to rack up some points, for the unheralded to start to make a name for themselves.

Seamus Power won in July 2021 at the Barbasol, but it was at another event for the middle class, played opposite The Open Championship. Since then, Power, 35, has enjoyed a steady, noticeable climb, culminating with his best season yet in 2021-22: five top-10s and 13 top-25s in 26 starts, banking more than $3 million and finishing a career-best 43rd on the FedExCup list. Power hadn’t yet solidified his standing on the A-tour … but he was getting close, on the verge of upward mobility.

No longer worried about job security, he started to notice a change in his mentality. “I was really able to play much more freely when you’re near the lead,” he said, “and I think that’s a nice thing to be able to do.”

That wasn’t the case for many players in Bermuda; Power was the only top-50 player in the field. Most were there to get a head start. But Power's hard-fought victory Sunday changed his world for the foreseeable future.

His second Tour title gave him what is essentially a three-year exemption, which is no small thing for a player who spent the first four seasons on Tour battling just to keep his card. And it propelled him away from the top-50 bubble all the way to No. 32 in the world — not just locking him into the 2023 Masters, but also a part of the Tour’s elevated series and likely into the rest of the majors as well if he can maintain his position.

At last, he has arrived.

“You’re sometimes looking over your shoulder a little bit,” he said. “You know the cutoff for the top 50 is coming up soon, there’s not much golf left, so it’s nice to get away from that. It’ll definitely clear your thoughts, clear your head going forward.” 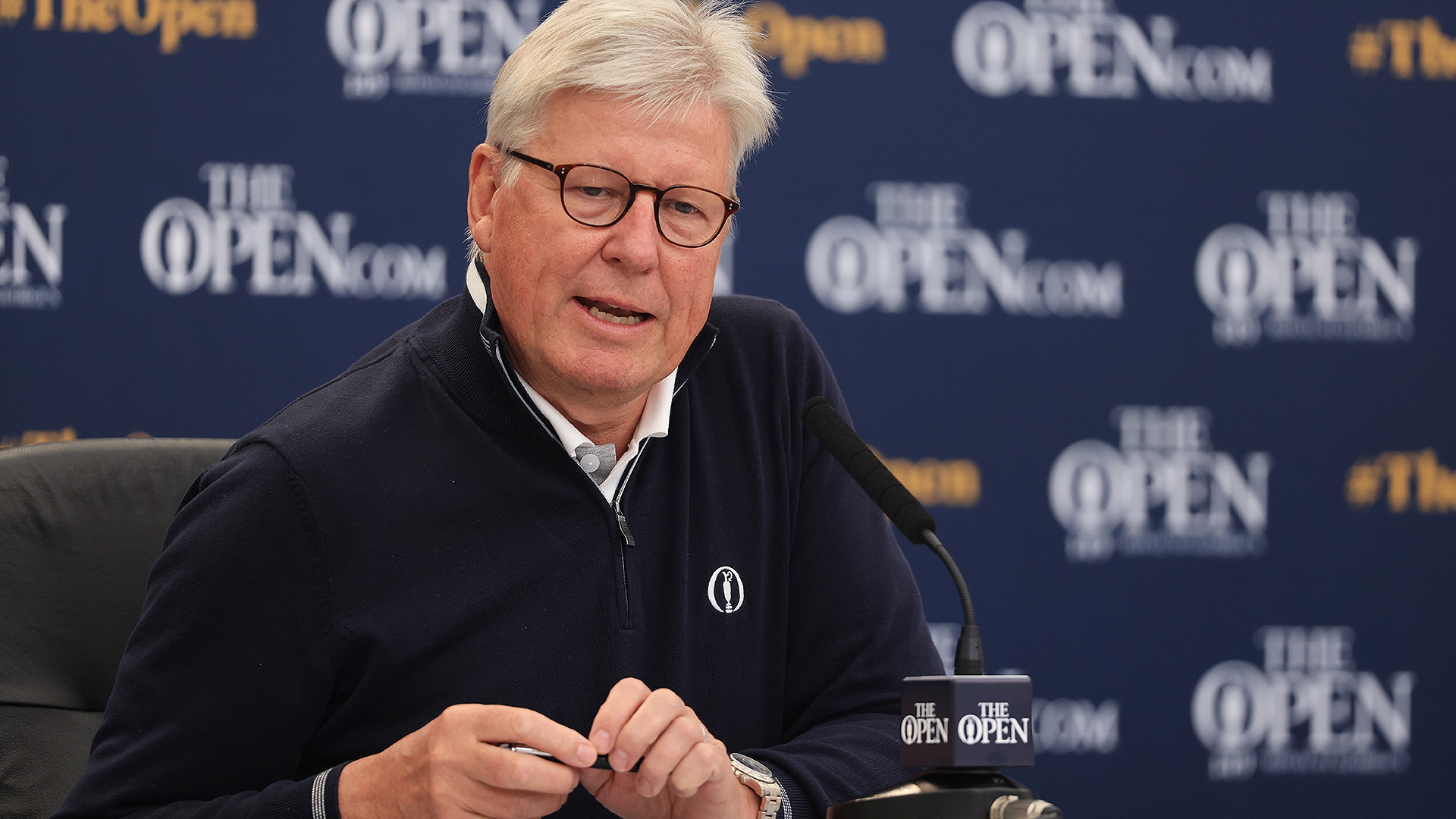 The head of Golf Saudi recently claimed that the majors have “sided” with the established tours, but that doesn’t appear to be the case — at least not currently.

R&A chief executive Martin Slumbers told Golf Digest that there are no plans for the organization to ban LIV golfers from next year’s Open Championship. That matches what he told reporters ahead of the 150th Open at St. Andrews.

Slumbers said this is a fight for the tours, not the governing bodies, but that doesn’t mean there won’t be changes to the Open qualification criteria that could potentially make the road tougher for LIV players.

Currently, the top 50 players in the world are automatically exempt into the year’s final major. With LIV players not eligible to receive points — and likely at least a year away, if not more — those players will tumble outside the OWGR cutoff and need to seek other avenues for inclusion.

One of those is open qualifying, and Slumbers told Digest that the R&A is committed to being “open.” It’s also possible that the R&A will create a separate qualifying list for the top LIV performers.

Slumbers said the R&A will make public its stance regarding LIV in January or February. Stay tuned.

#Perspective: Ben Griffin. Working as a mortgage officer a little more than a year ago, Griffin was less than nine holes away from winning on Tour. It didn’t go his way Sunday in Bermuda — where he painfully let slip the possibility with a bogey-bogey-bogey-bogey-double stretch on Nos. 12-16 — and he didn’t forget how far he’s come in such a short time frame. “It means the world to be able to compete,” he said, “and I can’t get mad at anything that I do because it’s so cool to be able to play on the PGA Tour.”

Maybe Now We Can Stop Talking About It?: Sergio Garcia. Though he’s disappointed, Garcia said he knew the potential consequences of joining LIV and was comfortable forfeiting a spot on the European Ryder Cup team and future captaincy. Jon Rahm, who partnered with the all-time points leader at Whistling Straits, has been adamant that he wants his fellow Spaniard on the squad in 2023, but Garcia said he is content with staying home and doesn’t want to be a distraction in the team room. Perfect — now we can move on. It ain’t gonna happen, nor will Ian Poulter and Lee Westwood factor into the mix for 2023.

Grain of Salt: Donald Trump’s claims. Of the many eyebrow-raising things that the former President said following his LIV pro-am round last week, this was among one of the most outlandish (and untrue): The Open “wants to come back” to Turnberry. Golf’s oldest major hasn’t returned to one of the best courses on the rota since 2009, before the course was purchased by the polarizing Trump. Then, following the riots on the U.S. Capitol in January 2021, the R&A said that it had no interest in playing at the Trump-owned course for the "foreseeable future." After Trump’s comments last week, well ... "There is no change to our position on this," the R&A said in a statement. Oops. 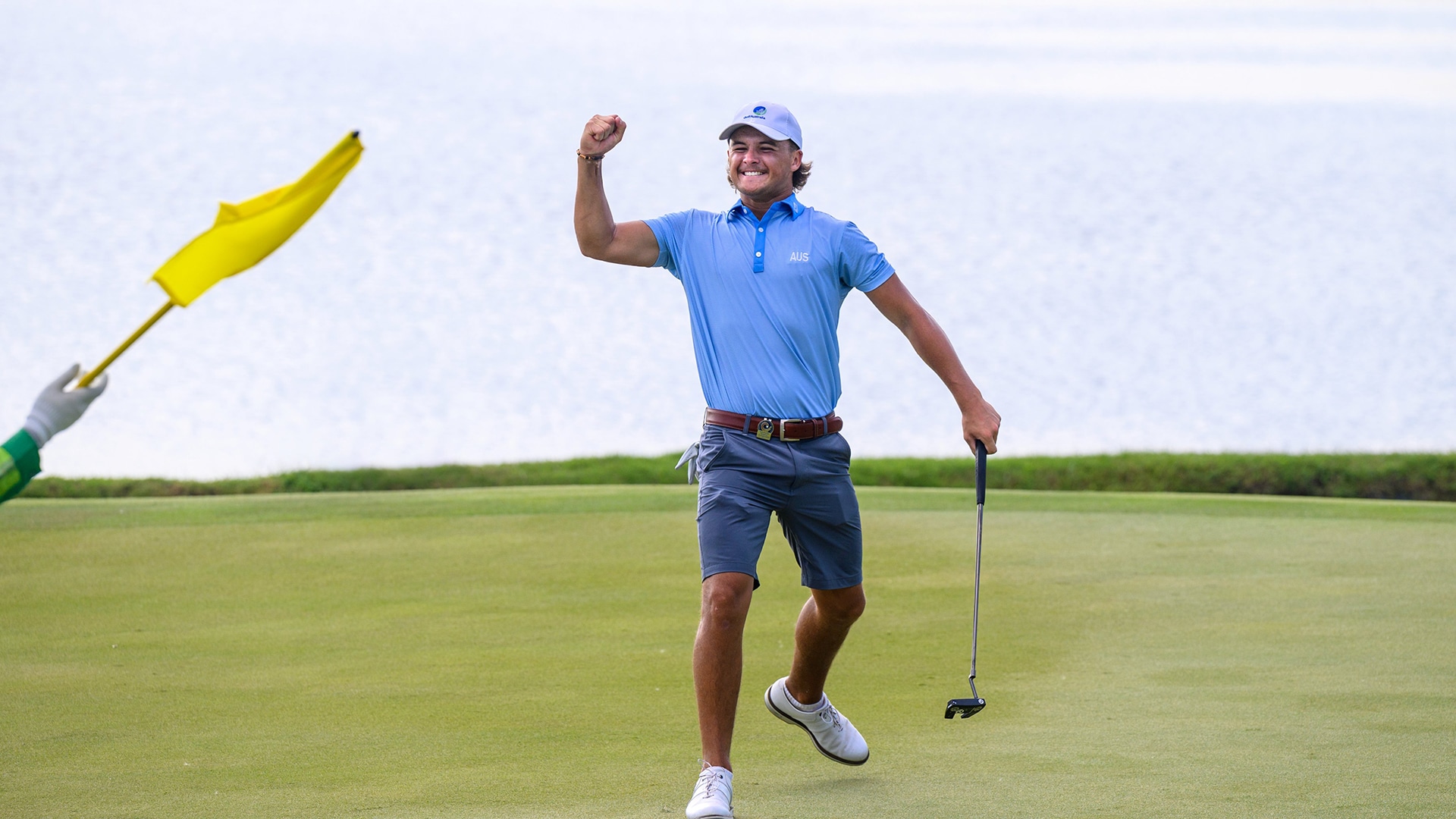 Changing Plans: Harrison Crowe. The Aussie was all set to turn pro following last week’s Asia-Pacific Amateur Championship, but then a funny thing happened — he won. With four back-nine birdies and some help from a late double bogey by Bo Jin, Crowe (who was inside the top 50 in the World Amateur Golf Ranking) has delayed his pro plans for almost a year now that he has two major exemptions on the books for 2023 (Masters, Open).

Nice Try: Phil Mickelson. Concluding a turbulent year unlike any other, Mickelson squared off against Cam Smith in singles with his team’s fortunes on the line. Employing the same gamesmanship that he used during the final round of the 2021 PGA, when he wore down Brooks Koepka, Mickelson slow-played the Open champion, with Smith astonished that they’d fallen three or four holes behind the group in front. (Did the rules officials take the afternoon off?) Smith still prevailed, sending Lefty into a long offseason.

Learning Experience: Caleb Surratt. The Tennessee freshman has already turned plenty of heads, and he showed that he has the goods at the next level with a second-round 64 in Bermuda — the lowest round by a teenager on Tour in the last two seasons. That was good! Then came the (very) bad: He followed it up with an 85 – a 21-shot difference that, according to the Tour, was the most since 2012. Oh, and just to show how maddening this game is, Surratt shot 65 in the final round. That's a 64-85-65 to close out the week.

Blown Fantasy Pick of the Week: Russell Knox. With a weak field, you don’t know quite what you’re going to get, but we surely expected more in Bermuda from Knox, who had produced three consecutive top-16 finishes on the short, windswept course that should have been right in his wheelhouse. Instead, his weekend 72s dropped him all the way into a tie for 49th. Sigh. 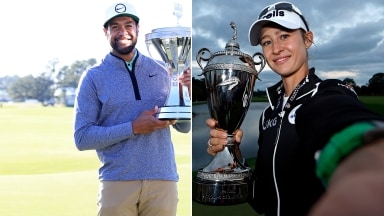 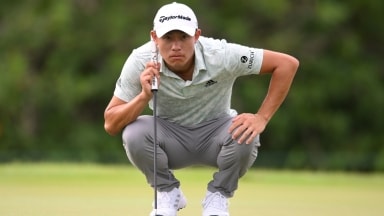