Pressel opens up on match-play controversies 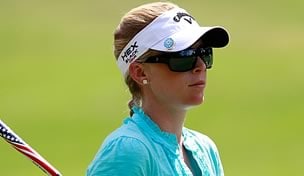 The controversial slow-play penalty that may have cost her the Sybase Match Play Championship title stayed with her long after the last putts dropped at Hamilton Farm Golf Club in Gladstone, N.J.

Even a day later, Pressel struggled with the notion she deserved to lose a hole for slow play in that situation.

“Pace of play is an issue, but in that situation, I’m not sure it should have been called,” Pressel told GolfChannel.com. “I’m a little upset, and I think I have a right to be. It was an unfortunate situation that could have changed the whole outcome of the tournament.”

Video: Anatomy of a slow-play penalty

After winning the 12th hole Sunday to apparently go 3 up in a semifinal match against Azahara Munoz, Pressel was penalized for slow play. She was assessed a loss-of-hole penalty for being over her allotted time on the 12th hole, meaning she was just 1 up.

Pressel said she knew the pace-of-play rule and how the timing worked. She even checked with the rules official to make sure it was the same policy applied in stroke play.

Though Pressel believes slow play is a significant problem on the tour that needs to be addressed, she questions the subjective nature of the application of the LPGA’s pace-of-play rule. She questions it being enforced the way it was in her semifinal match.

“There were people over the time-par all week that weren't put on the clock,” Pressel said. “It's such a subjective thing, and I don't really understand it. I'm not sure I should have been called for it. For a subjective decision to come into play like that and dampen a tournament that was quite exciting, I don't think that helps the tour at all.”

Pressel, in the afternoon consolation match, couldn’t help noticing that Munoz and Candie Kung were out of position behind her in the finals match, but no penalties were called.

Pressel said she hasn’t discussed her frustration with LPGA officials yet, but she will.

A frustrating element for Pressel is that Munoz acknowledged her slow play got them on the clock, but it was Pressel who paid the price when swirling winds and a delicate pitch at the 12th caused her to take more time than she customarily does. Pressel said she has been on the clock in the past, but this is the first time in seven years on tour she has received a bad time.

Pressel called the news a tough blow in the middle of a match.

“Of all the things I couldn’t control in terms of the ruling, what I could control is how I responded,” Pressel said. “It definitely shook me up, and I wish I could have been a little stronger. I was still ahead in the match. It gave her a little bit of a boost, and it made me press a little bit harder, even though I was ahead. I still could have won the match. I was definitely playing well. It was a very unfortunate series of event.”

The emotional nature of the match was further heightened when Pressel questioned whether Munoz violated the Rules of Golf grounding her putter in the line of a putt at the 15th hole. Pressel and Munoz are friends, and the tumultuous nature of the match has created questions about how their relationship will be affected.

“Aza and I will be fine,” Pressel said. “She has been playing great. It was only a matter of time before she won. I was very happy she won the afternoon match. She is a friend. She didn’t do anything malicious. It is just golf, just what happened.

After a sluggish start to the year, Pressel is pleased with the way her game is coming around going into the summer. She contended at the Salonpas Cup on the Japan LPGA Tour earlier this month. She is hoping to build on her strong play at Hamilton Farm.

“To know my game has finally come around, when I feel like I’ve been struggling with it for the better part of six months to a year, is good,” Pressel said. “All I can take from this is I’m finally playing better, and I feel like I can contend again.”