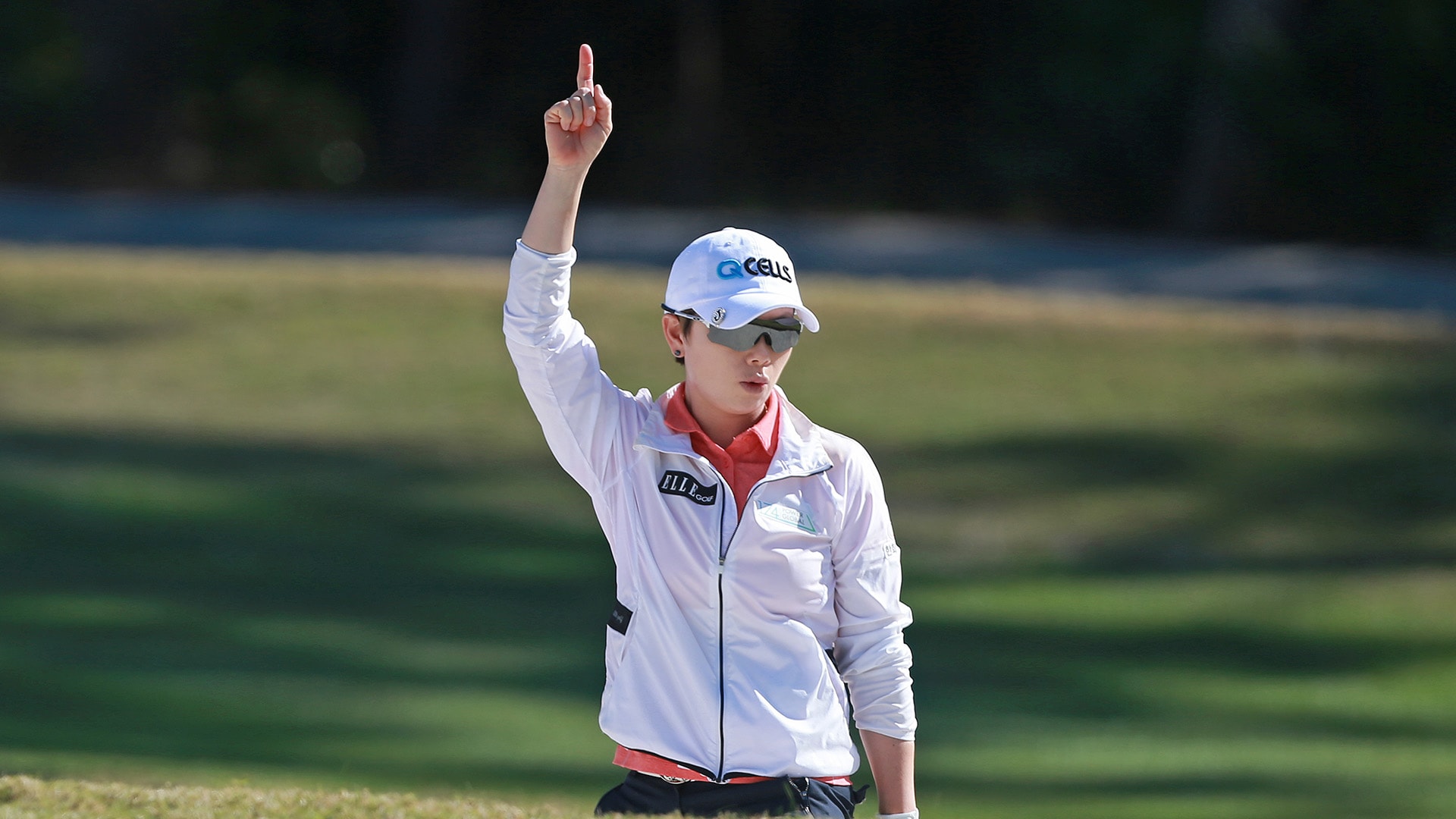 Apparently, he wasn’t just talking about the nightlife.

In Thursday’s first round of the LPGA’s season opener, tour winners mixed with celebrities and sports stars in a day of more rollicking fun than you’ll see in any other women’s event this year.

“Today was a bit wilder than normal, and I liked it,” Danielle Kang said after opening with a 3-under 68, which left her three shots behind co-leaders Brooke Henderson and Eun-Hee Ji. “I had a blast.”

Kang played with country music star Lee Brice serenading her with his hit songs. She heard renditions of “Rumors,” “I Don’t Dance” and other tunes.

“Lee was singing while I was hitting,” Kang said.

“I had a lot of fun,” Lewis said. “They were taking things pretty seriously, too. You could tell they wanted to play well and do well. I think that kind of helped me get into a normal rhythm of playing.”

They weren’t tour level serious, though.

“They at least waited until the last couple holes to pull out the beer,” Lewis said. “But it was fun.”

“Hands down my favorite, best pairing I’ve ever been in,” Ko said. “It was just so much fun.”

Pierzynski relished the experience, too.

“She’s amazing,” Pierzynski said, with a crumpled, empty can in his back pocket after the round. “She hit it perfect every single time. It made me feel bad. It made me want to get better. I don’t think I could get there.”

Ariya Jutanugarn is the Rolex world No. 1, but she felt like supporting cast in her grouping with former MLB players Josh Beckett and Kevin Millar. She opened with a 67 but marveled more at the excitement her partners were creating.

She said Beckett blasted one drive 60 yards past her. She’s one of the longest hitting women on tour.

“Every hole he had a chance at eagle,” Jutanugarn cracked. “I thought, 'Maybe I’m not that good.’”

She also marveled at how autograph seekers swarmed her playing partners.

“Nobody asked me for an autograph,” she said, good naturedly.

Mardy Fish led the celebrity field with 39 points in the modified Stableford format. That amounted to 68 on his regular scorecard. The newly named U.S. Davis Cup captain is going for his third Diamond Resorts title.

Roenick joked that his best chance to win is getting in the heads of Fish, Mulder and the other favorites.

“I need to talk a bit more about how good they are, how proud I am to be playing with them, how I am in awe of them,” Roenick said. “Then, hopefully, they’ll get big heads.”

Kang summed up how different this tournament is when asked about her closing bogey after mis-clubbing on the 18th tee, a par 3.

“I forgot the number on the tee box,” said Kang, who didn’t bother stepping off to re-set. “I don't know what I was doing. I just hit it. I usually wouldn't  ... I mean, it kind of takes you out of your routine and all that. It's OK. Sometimes, you've got to roll with the punches. This type of tournament, you've got to have fun.”