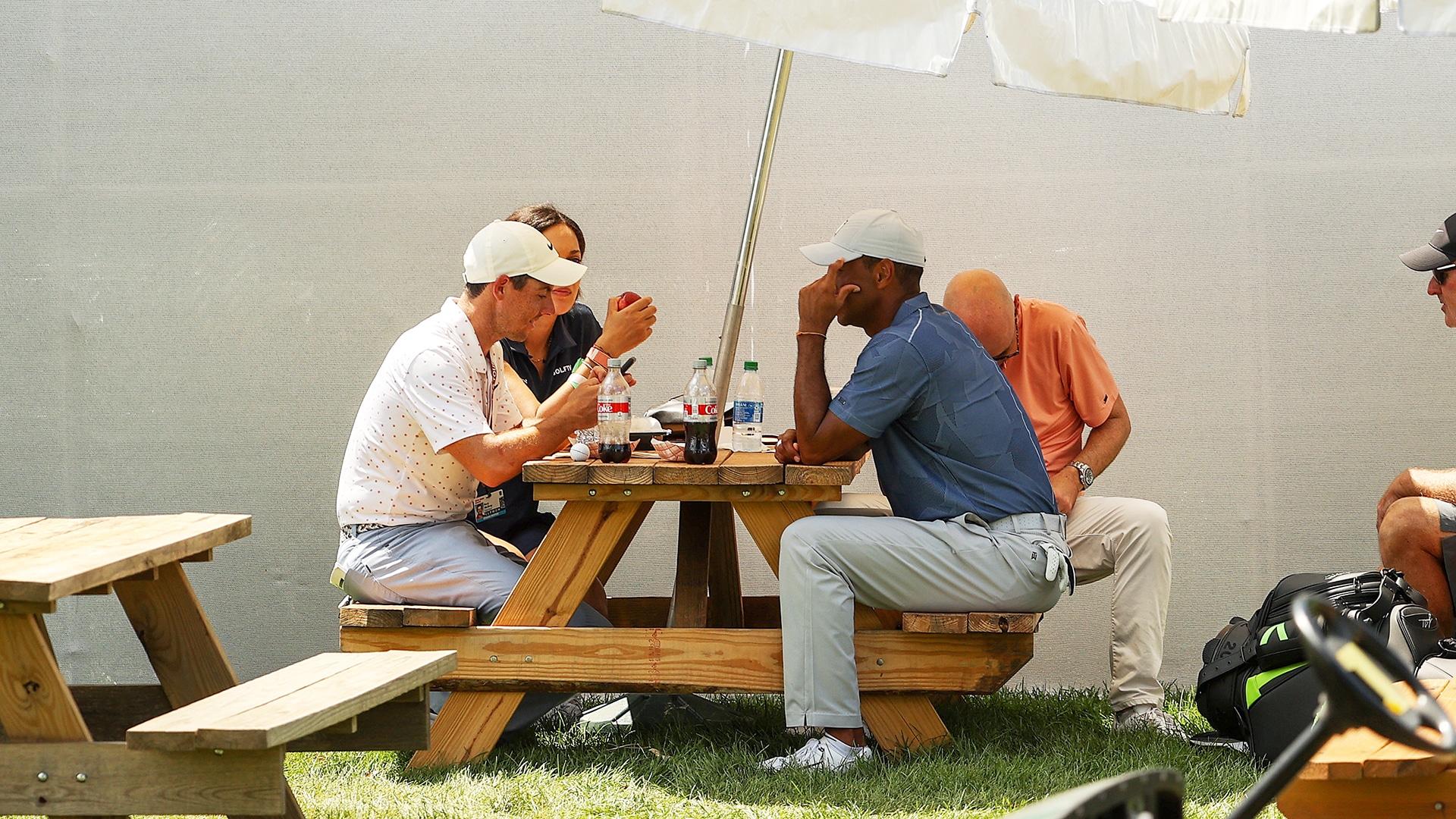 NORTON, Mass. – By now, we’ve grown accustomed to certain sights and sounds at these COVID-19 era PGA Tour events. Little traffic and commotion around the host venue. News conferences over Zoom. First-tee introductions with no applause.

But this, two months in, was the most surreal scene of all: Tiger Woods and Rory McIlroy ordering hamburgers and Diet Cokes, then grabbing a seat at a picnic table outside the media center. There were maybe two dozen people around – a few writers (this scribe included), some volunteers, Tour staff – but no one bothering two of the most famous sportsmen in the world as they lunched, in plain sight, for a half hour under an umbrella.

Imagine that six months ago.

In normal times – remember those? – the idea would have been laughable. At high noon they would have been easy targets for autograph seekers and selfie requests and various other looky-loos. Little wonder they usually decamp to the clubhouse for some post-round privacy. But on Saturday, a couple on-site photographers posted up on the media-center steps and snapped the unusual sight. The two mega-stars didn’t seem to mind, and maybe didn’t even notice. After all, they hadn’t seen much of each other over the previous four hours, during a round that didn’t go the way either of them wanted.

Though they’d already blown their chances to win The Northern Trust, their 8:30 a.m. start time should have offered a golden opportunity for some outside-the-ropes eavesdropping. As they stroked a few putts on the makeshift practice green before the round, McIlroy mentioned to Woods how he’d once added three-quarters of an inch to his putter – not unlike what Woods had done with a different model Scotty Cameron. Always aware of his surroundings, Woods turned his back to the cameramen, prying reporters and hot mics, his response drawing a hearty laugh from McIlroy. No gold here.

And that, unfortunately, was as light as the mood would get on a forgettable day for both. Saturday was hard work. It didn’t help that they often started off down opposite sides of the hole, heads down, grinding. By the time they arrived at each green, they often were frustrated and stressed, trying to salvage par.

Woods missed six putts inside 10 feet and seemed ready to put his beloved Scotty back in timeout. (His caddie, Joe LaCava, waved his towel in mock celebration after a birdie on 18.) McIlroy joked that his 3-8-2 start read like an area code and restrained himself from snapping his driver in half, Bo Jackson-style. The round would still have been muted had they been tearing apart the course, but this early-morning stroll was eerily still – so quiet that you could hear a water bottle being opened 50 yards away, so quiet that players backed off because of faraway footsteps. Woods still draws the largest gallery of any player, but the total number is now about 50, not 5,000. His entire career has been played in a fishbowl. And in some sense, it still is, thanks to featured-group coverage on TV. But these pandemic rounds will never feel normal. Not to Tiger, not to Rory, and not to any of the game’s other 1-percenters.

As much as the FedExCup is billed as a nerve-jangling cutdown from one event to the next, culminating with the 30-man Tour Championship for $60 million in bonus money, there is no tension apparent this week at the playoff opener. There’s not enough on-site energy to produce that. In the most star-studded group of all Saturday, more than a dozen shots out of the lead, were just two proud pros trying, unsuccessfully, to turn around a poor round. Needing to make a move to ensure his spot at East Lake, Woods instead shot 73 and made his odds of reaching the Tour Championship even longer. McIlroy was even worse, with 74, and will extend his streak of starts without a top-10 to seven, his worst stretch in years.

Neither player talked to the media afterward, and that was OK. There was little to say about an off-day in what has been a long, complicated year, for everyone.

And besides, Woods and McIlroy played poorly enough to do it all over again Sunday – only one group earlier. Might as well reserve their table for lunch.