Tour views 36-event schedule as a 'credible' season, as it considers points changes

The revised PGA Tour schedule that was released on Thursday now features 36 events, including the playoffs, and “that would constitute a credible season,” according to Tour officials.

At what point amid more delays would the season be considered "not credible" remains to be seen.

“We've not defined a set number [of tournaments] at this stage. We're focused on the answer to that question being tied to hopefully resuming play at the Charles Schwab Challenge (June 11),” said Andy Pazder, the Tour’s chief tournament and competitions officer. “We have not defined that threshold if we fall below X number of tournaments, then Y will happen.”

About 25 percent of the Tour season has either been cancelled, like The Players Championship and The Open, or relocated to the fall after the 2019-20 season is completed, like the PGA Championship and U.S. Open.

Because of those high-profile losses, the circuit has lost about 30 percent of available FedExCup points, which could prompt changes to the post-season points structure.

Currently, playoff points are four times the value of regular-season events, excluding majors and World Golf Championships. The adjusted distribution would reduce that to three-times the regular-season value. 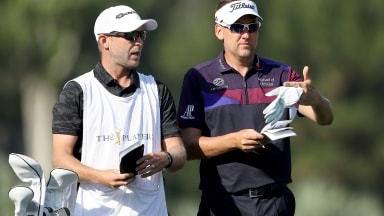 Poulter goes from lost card to contending at Players

Three weeks ago, Ian Poulter thought he was out of a PGA Tour card. Now he enters the third round of The Players Championship firmly in contention.