Prior to last week, Chris Wilson was in danger of losing full status on a major tour. He had made only 2 of 13 cuts on the 2012 Web.com Tour, and the former Northwestern product was middling at No. 165 on the money list, earning only $6,486.

Then he shot four rounds of 68 or better at the Price Cutter Charity Championship, eventually prevailing in a playoff last Sunday over Scott Harrington, and now the 27-year-old Wilson has jumped all the way to No. 23 – and in position for a return trip to the PGA Tour.

“You just have to believe in what you’re doing, even if sometimes the results aren’t showing themselves,” Wilson said Tuesday on “Morning Drive”. “I just stuck to trying to get better each day at the smaller things.”

Five weeks ago, before the Utah Championship, Wilson made a trip to Virginia to meet with renowned sports psychologist Dr. Bob Rotella. They discussed Wilson’s approach to putting, and how he needed to “use my athleticism a lot more, and my feel and gifts to putting, instead of trying to be too perfect on the greens,” he said.

In 2010, during his first stint on the PGA Tour, Wilson admitted that he probably didn’t have enough prior experience to be able to keep his card. That season, he made only seven of 26 cuts and earned $76,481. But, he said, “I proved to myself that I had enough talent to get there. That’s a looming question for a lot of players: Am I good enough to get out there? Am I talented enough to play at the highest level?”

After his victory last week in Springfield, Mo., Wilson helped answer those questions once again. 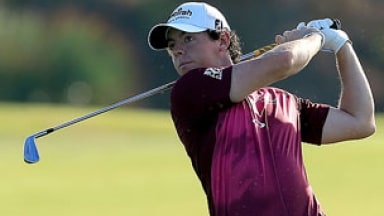 Take a look inside the bags of last week's tour winners, Rory McIlroy, So Yeon Ryu and Chris Wilson.