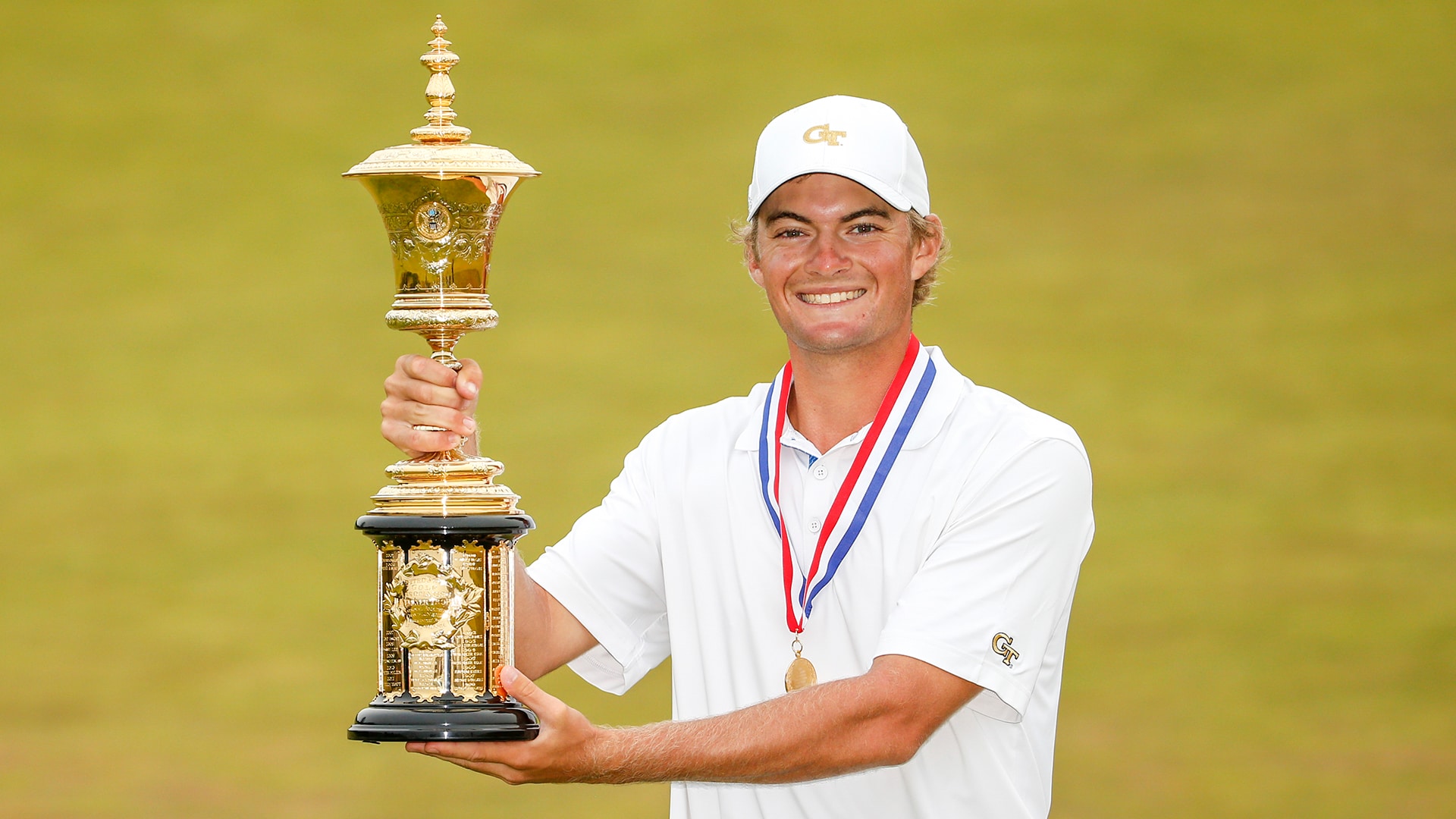 Against a former competitive skier from Reno, Nev., in Osborne, Strafaci battled through a thick marine layer that rolled through on the final nine, bringing cold temperatures and at times zero visibility. He lost two straight holes to head to the par-5 finisher tied, but he then hit the shot of his life, a 4-iron from about 230 yards out that landed 15 feet away, to set up the winning birdie.

"That was the first time in my life that I actually told myself I was going to hit a winning golf shot," Strafaci said. "I stepped back, and I closed my eyes and put my hands over my eyes ... and I said, 'This is your time to hit a winning shot. Go get it.'"

Strafaci's father, Frank Jr., who was on the bag this week, was an accomplished amateur player and competed in three U.S. Amateurs, making match play once. But that was nothing compared to Frank St., Tyler's grandfather who died in 1988, 10 years before Tyler was born. Frank Sr. played 16 U.S. Amateurs, reaching the quarterfinals in 1947 and ’49, and then giving Arnold Palmer his best shot in the first round in 1954 before falling to the eventual champion on the final hole at Country Club of Detroit.

Frank Sr. also won the 1935 U.S. Amateur Public Links and played in a pair of Masters and two U.S. Opens, finishing ninth in 1937. After capturing the one championship that his grandpa always wanted to win, the 22-year-old Strafaci will play in three majors in 2021 – the Masters, U.S. Open and Open Championship.

He will also represent the U.S. in the Walker Cup – another event that eluded Frank Sr. – next May.

"I always wanted to be the first Strafaci to make a Walker Cup ... and now that I'm on that team, I feel like I've made him proud, and I feel like it's just unbelievable," said Strafaci, who earlier this summer won the North and South Amateur, a tournament Frank Sr. won twice. "I mean, it's something I've dreamt about and something that my father has told me, stories about my grandfather wanting to go there and stuff like that."

The Yellow Jackets fifth-year senior battled back from 5 down two-thirds of the way through a morning 18 holes that included 14 combined birdies and a mythical 12-under 60 best-ball score. He trailed just 1 down at the break.

After a disastrous lag-putting performance in his semifinal victory over Oklahoma State’s Aman Gupta, Strafaci spent an hour on the practice green just outside the Bandon Dunes clubhouse Saturday night. The extra work paid off, as Strafaci holed three putts of more than 20 feet in the first seven holes in the afternoon to take his first lead of the match.

There were some slip-ups, including a miss inside 2 feet at 10 and a terrible three-putt at 13, but as heavy fog rolled in for the final nine, the flatstick delivered down the stretch when the ball-striking became somewhat of a guessing game. After Osborne nearly aced the par-3 12th for the second time in the final, Strafaci matched his opponent’s birdie from 25 feet. After driving the green at the short par-4 14th, he holed the clutch 6-foot eagle putt on top of Osborne’s 20-foot make for birdie. He then nestled a long lag close at the par-3 15th to earn a conceded par and a 2-up lead after Osborne, who hadn’t trailed by more than 1 down all week, made a mess of the hole, going long and needing two pitches to get on the green.

"He has a really good short game," Osborne said. "His chipping and putting are off the charts and yeah, I'd take away that I want to get better at those things. ... He obviously putted lights out the entire day."

That’s when visibility really plummeted. Strafaci found the pesky fairway bunker at 16 and clocked his next shot over the green and into the penalty. He found the penalty area twice on 17, with his second and fourth shots, to lose another hole.

But just like he had done in each of his previous three matches, he won the final hole after Osborne missed the green right, left his chip about 10 feet short and missed the putt.

"I'm not going to lie; it's stressful," Strafaci said. "Winning the Am is amazing, but winning four matches in a row, 1 up, that's something I'm always going to look back on if I'm in a major and I'm even going into the last hole with someone like Brooks Koepka or Tiger [Woods] or someone like that down the road, I'm going to look back and say I've done this before, I've done it four times on the biggest stage in amateur golf, I should be ready for this."

The final tally: a combined 25 birdies and one eagle.

"I don’t know what they’re saying," Frank Jr. said, "but this has to be one of the best played finals in U.S. Amateur history."