Simpson, others show support for victims of UNC-Charlotte shooting 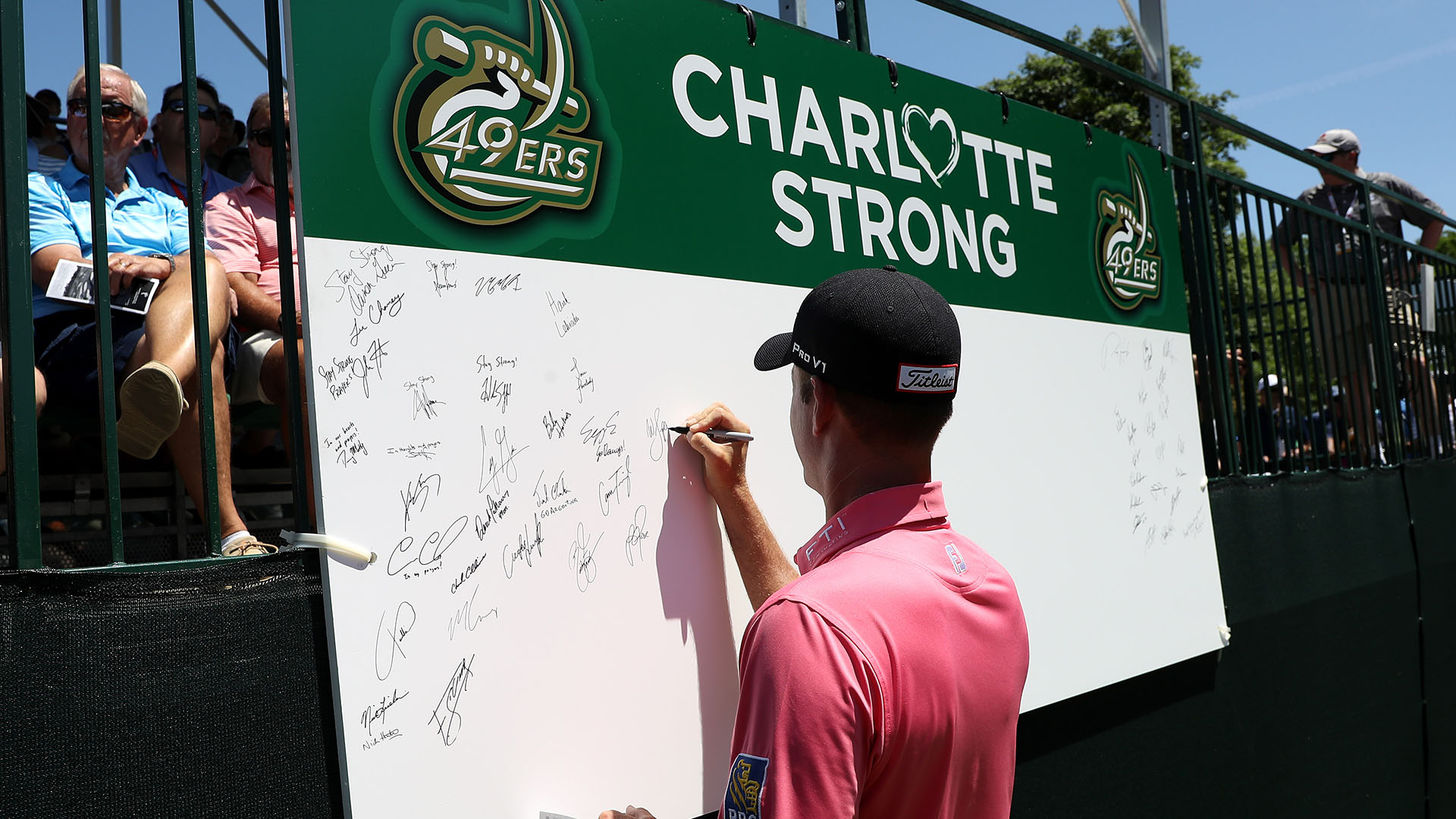 A sign next to the bowl explained the reason behind the few remaining green ribbons: “Charlotte Strong.”

“Our city is in mourning from Tuesday evening’s tragedy at UNC-Charlotte," the sign read. "Should you wish, feel free to wear a ribbon this week in support of the families and our community affected by these senseless shootings.”

Herding 156 PGA Tour cats in the same direction is as challenging as it sounds, but on Thursday nearly every player, caddie, official and volunteer who criss-crossed the layout for Round 1 of the Wells Fargo Championship was sporting a 49er-green ribbon.

Tragedies occur far too regularly in our world, but rarely do they happen so close to golf’s largely insular universe. Tuesday’s shootings, which left two students dead and four hospitalized, occurred about 20 miles north of Quail Hollow. The campus is even closer to Webb Simpson’s house.

The five-time Tour winner played on Thursday because, well, that’s his job. But his thoughts were never far from the tragedy. Simpson’s church, Oakhurst Baptist, is a short drive from the UNC-Charlotte campus and has a handful of the school’s students in the congregation.

“There was a text chain started as soon as the shots were fired. One of our pastors, because we have a lot of UNC-Charlotte kids at our church, he was trying to text as many people as he could to make sure they were safe,” Simpson said. “This is like live texting trying to figure out if any people we knew or the church knew got shot. Yeah, it definitely feels a lot weirder and worse that it's a few miles away.”

It’s heartbreaking and, particularly for the Charlotte locals in the field, soul-searching. Cast in the middle of a round that would best be described as a grind, Simpson and his longtime caddie, Paul Tesori, spent the better part of a warm afternoon talking about gun violence.

For the father of five, this isn’t political or a question of gun control. This was about a parent’s natural desire to protect their children in an increasingly violent world.

“We don't understand how people can do that. Don't understand why it keeps happening,” Simpson said following his round. “I have five kids and I can't imagine what those parents are going through. We even said that if you get your kids off to college, you kind of wipe your forehead that they're doing well, they're probably having the best years of their life and now they're gone.”

Johnson Wagner can relate. He’s a resident of Charlotte, a member at Quail Hollow Club and a part of the community. When players wear ribbons at Tour events for whatever reason, there’s never any reason to question their motives. But for Wagner, the desire went well beyond the normal need to show support.

This is his home.

Wagner had a similar brush with tragedy in 2007 following the Virginia Tech shootings. He played his college golf in Blacksburg, Va., and considered it his home for a good part of his adult life. On Tuesday, all of those same questions flooded his thoughts. Why here? Why his school? Why his community?

“It hits home every time. Virginia Tech had the massacre in ’07, it’s just ridiculous that it still happens and people are still that crazy. You can’t stop crazy people from doing crazy things,” said Wagner as his voice trailed off.

By the time Simpson completed his round, the bowl in the Quail Hollow locker room was empty, picked clean by those searching for a way to show their support to a school and community broken by senseless violence. Around the course officials put up large “Charlotte Strong” boards for fans to sign and show unity. Simpson was one of the first to stop and offer his signature.

There will likely be some sort of donation from the event to a fund that’s been created for the victims of Tuesday’s shooting, but now it’s best not to attempt to put a dollar value on such a tragic loss of life.

For now, the ubiquitous green ribbons will have to suffice.

“Wearing the ribbons is the least we can do,” Simpson said.