What is PGA Tour University? A detailed look at the Tour's new major

The PGA Tour has a new major.

This one, however, is only for college players.

After more than three years of deliberating, constructing and fine-tuning, the Tour lifted the veil Monday on PGA Tour University, its new program designed to give the top Division I senior golfers post-college playing privileges on its various developmental tours, including the Korn Ferry Tour.

“This is a massive opportunity for the Tour to make an impact,” said Brendan von Doehren, the Korn Ferry Tour’s senior director of tournament and membership affairs, and the program’s brainchild. “We want to have the best players in the world come through our tours. This is going to really help in that.”

The benefits will run both ways when PGA Tour U is officially launched this fall. Not only will the Tour inherit the best talent in the college game each summer, strengthening the depth of its fields and increasing its profile and marketability, but college players will now be incentivized to stay in school, honing their games and gaining experience, with a select handful of program graduates each year being handsomely rewarded for their college performance with tour membership.

Think of it like college golf’s version of a draft: the top 5 four-year players on the program’s points list after the NCAA Championship will receive their Korn Ferry Tour cards to compete that summer and potentially parlay those starts into a PGA Tour card, while Nos. 6-15 will have the option to play full-time on the Mackenzie Tour, PGA Tour Latinoamerica or PGA Tour China. 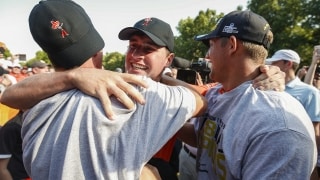 PGA Tour U a major boon to Tour, college golf

The new PGA Tour University program unveiled Monday will incentivize players to stay in school by creating a pathway to the Korn Ferry Tour and other feeder circuits.

“In other sports, there is a direct connection between college and the pros … we just haven’t had that,” said Arizona State coach Matt Thurmond, one of the college coaches who were consulted during a process that also included feedback from the NCAA, golf’s governing bodies and the Tour’s players advisory council. “Basically, players would graduate from college and they’d disappear for a few years and then they’d pop back up on the Tour. Now there’s that direct connection.”

Added Stanford coach Conrad Ray: “This is an evolutionary step for college golf. It validates the hard work that everyone is putting in and celebrating guys playing really high-level golf and doing school at the same time.”

So how will PGA Tour U work exactly? Here’s everything you need to know:

This program is exclusively for four-year Division I golfers who meet the program’s playing requirements. The program does not require that a player earn his college degree, though players looking to be eligible after three years of college must provide intent and proof of early graduation.

What are those playing requirements?

Players looking to qualify for PGA Tour U must play in a minimum of nine qualified events in their final year of college. Events that count toward this number include college tournaments and PGA Tour events, including majors. Korn Ferry Tour events and other pro events will not count. Prospective graduates must also compete in NCAA regionals in their final year.

Will there be exceptions to those requirements?

For the most part, no. If a player can’t satisfy the minimum number of events played because of injury or other circumstances, he will not be eligible. However, von Doehren added that PGA Tour U will consider certain situations on a case-by-case basis, such as if a senior who has already fulfilled the minimum-event requirement gets subbed out or forced to withdraw because of injury during regional play and would’ve qualified for the top 15 otherwise. “We’re going to do right thing and give ourselves the flexibility to make decisions,” he said.

How will the rankings be determined?

PGA Tour U will determine its graduates based on a filtered version of the World Amateur Golf Ranking, which will only include college events and PGA Tour events, including majors. No amateur events or other pro events will count. There will be no age-ing process for results, and the standings will incorporate the final two years, or 104 weeks, of play. 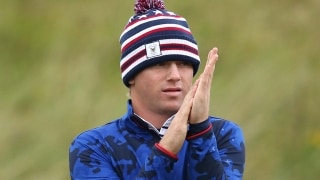 Who will be included in the rankings?

In any given season, only seniors will appear in the rankings. While players in their third years will accrue points, they will be excluded from the rankings until their fourth years. Von Doehren said it has not been decided when the following season’s initial ranking will be released.

How often will the rankings be updated, and when will the final ranking be determined?

The rankings will be released every Thursday during the season and culminate after stroke play of the NCAA Championship.

If a player is in the top 15 entering the NCAA Championship and has satisfied all requirements, can he opt not to compete?

No, a player protecting his ranking would be considered conduct unbecoming, which would be grounds for expulsion from the program.

What happens after the rankings are finalized? Who plays where?

Where will these cards come from?

The five players who receive their Korn Ferry Tour membership will not take away from the number of cards available at Q-School. Instead, the five spots each week will come from the bottom of the field list. “Those last five players in the field will have had plenty of at-bats, so there should be no complaining,” said von Doehren. “By June, you’ve either performed or you haven’t.” As for the rest of the graduates, those spots would come from those tours’ Q-Schools. Von Doehren said he’s already preparing for all of them to go to Canada.

Yes, but keep in mind that players can’t defer their starts on the Korn Ferry Tour or other tours. “Those players are going to have to choose which side of the tracks they want to play,” von Doehren said. In other words, a player such as Collin Morikawa, who hypothetically would’ve finished in the top 5 had this program been implemented last year, can accept a PGA Tour invite, but it will come at the cost of missing a start on the tour in which he is a member.

Can players remain amateur and still receive their starts?

Yes, but players must declare their intentions in writing within three days of the release of the final ranking. If a player decides to stay amateur and chase a Walker Cup or World Amateur Team Championship berth, he can still compete in tour events as a non-member, provided he turns pro within 10 days of the completion of those events. At that point, he can accept any remaining performance benefits, which at that point would likely only be a Q-School exemption or starts in the final couple of Latin America events. Players will not receive points retroactively for events in which they compete as a non-member.

How does the COVID-19 pandemic and its effects factor in?

In response to the cancellation of last season because of the coronavirus pandemic, the NCAA opted to grant all student-athletes an extra year of eligibility. This means that both rising seniors and seniors returning for an extra year will have the chance to participate in PGA Tour U this upcoming season. However, players who are in their fourth years but have another year of eligibility beyond that will have to declare by a specified date (yet to be determined, though likely sometime in the spring) if they want to continue with the program or withdraw and try again the next season. For example, if a rising fourth-year player decides next spring to chase one of those 15 cards and he comes up short, that player “won’t have another bite of apple,” von Doehren said. Also, PGA Tour U will remain flexible and adjust its rules should the pandemic cause further changes to the landscape of college golf, including the reduction of maximum competition days, which has already been implemented at the Division II level, or the worst-case scenario: the elimination of the fall season, which would force PGA Tour U to factor in results prior to last fall. 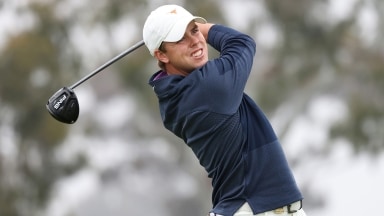 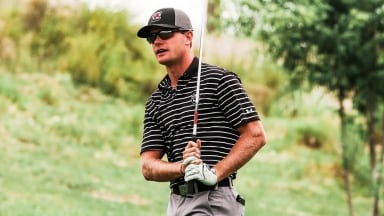