This year's major champions recall most memorable – and obscure – shots 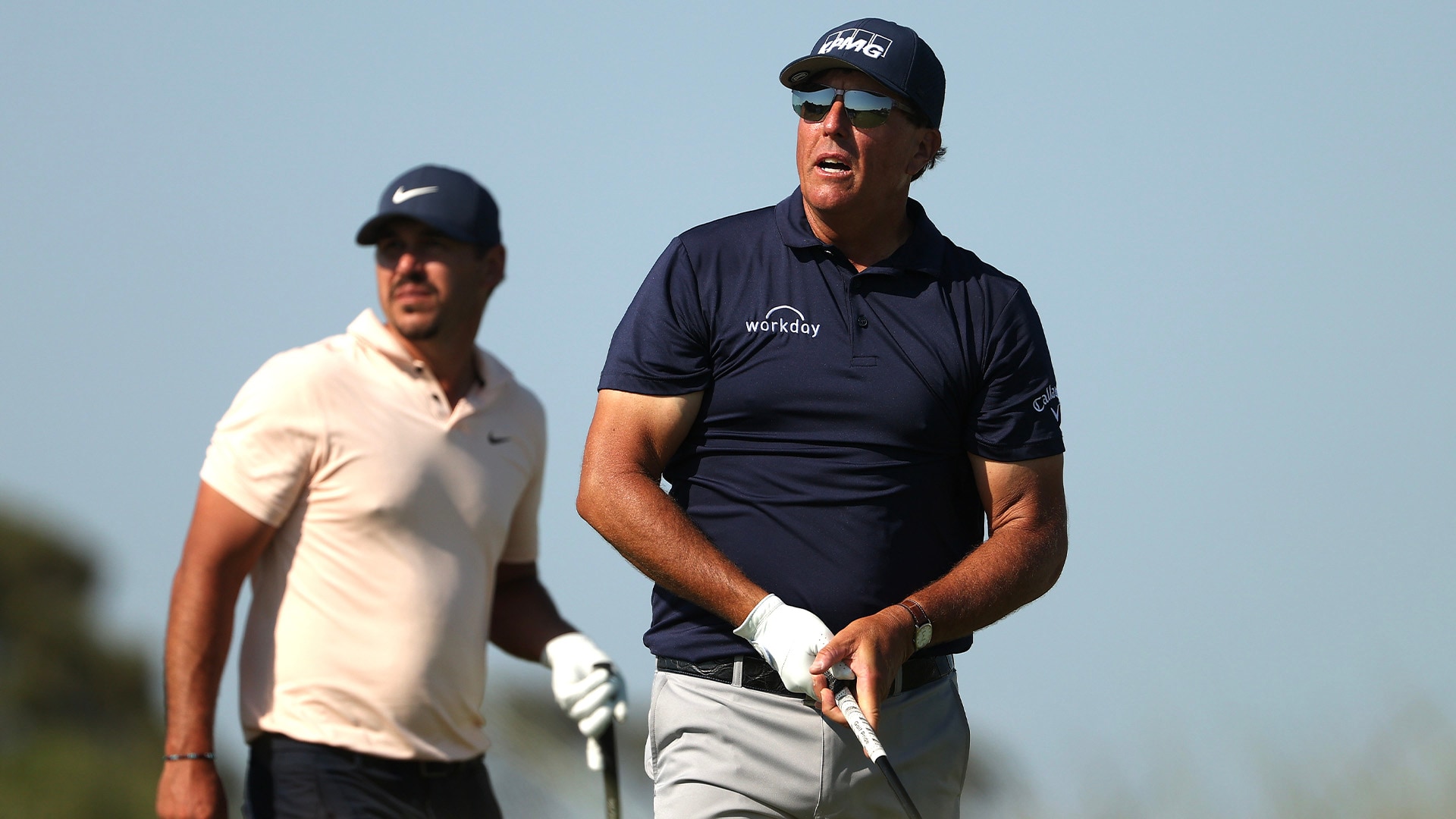 The most memorable shots of major champions are birdies, sometimes an eagle. What stands out to them are the pars, sometimes a bogey. And it’s not always on Sunday.

Hideki Matsuyama wonders what his outlook might have been if not for key putts on Thursday and Friday at Augusta National. Collin Morikawa needed one of his worst holes to play his best golf at Royal St. George’s.

In interviews with the four major champions, they recall at least one shot everyone remembers and one that is just as meaningful. 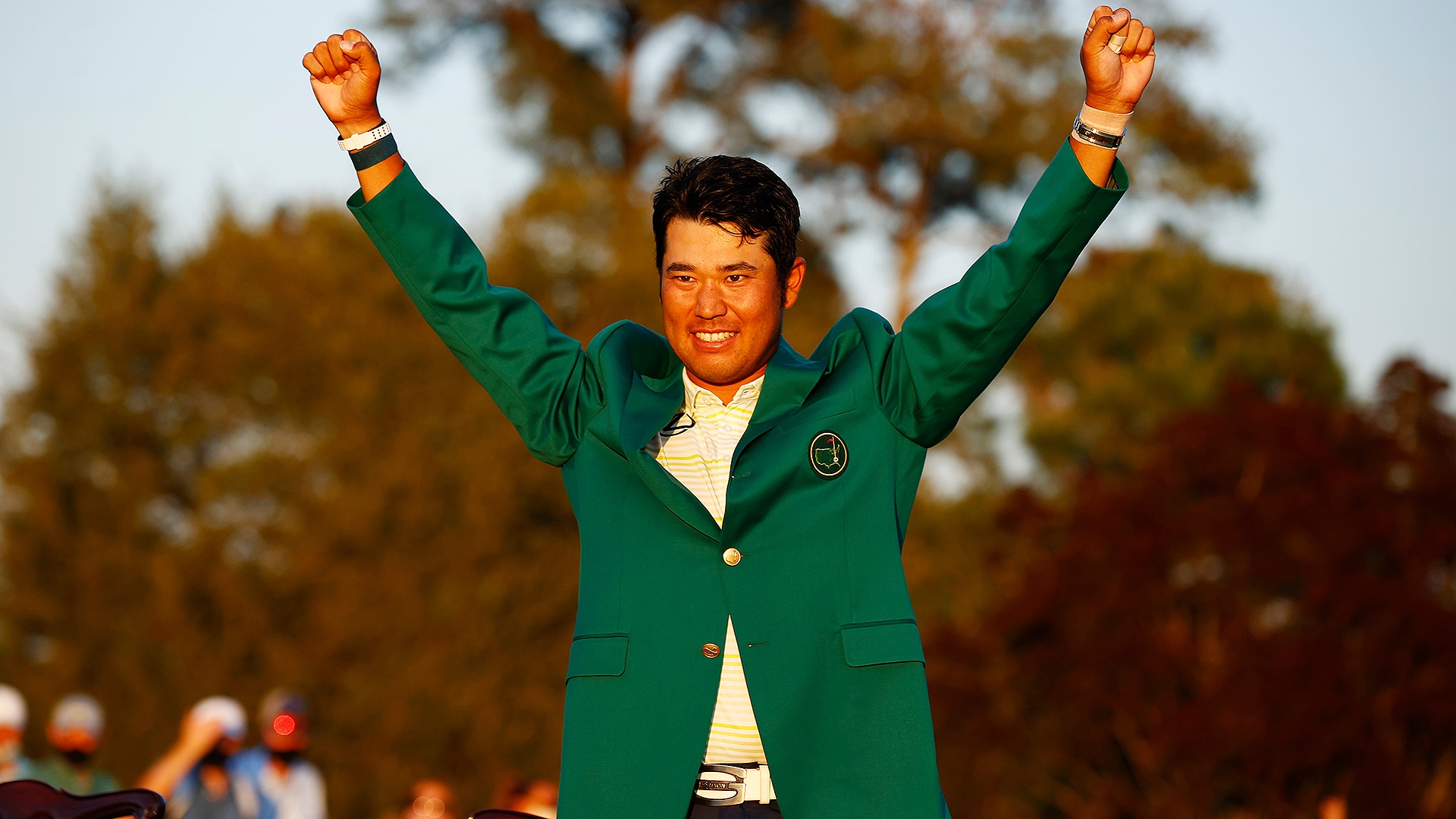 The action came so quickly Saturday after a rain delay at Augusta National that it was hard to keep up with all the birdies and eagles. Matsuyama took charge with the signature shot of the Masters, a 5-iron from 208 yards to 6 feet for eagle to take the lead for good. He followed with two birdies and a remarkable par save for a four-shot lead.

“It was a perfect number for a cut 5-iron with no wind,” Matsuyama said last week in an email interview. “I knew it was going to be good when it left the club and felt for sure I could make birdie when I saw it in the air. Making eagle was a real bonus.”

He remembers just as strongly how he finished each round.

Matsuyama was coming off a three-putt bogey on the 17th hole in the opening round when he holed a 7-foot par putt on the 18th. On Friday, he made another 7-foot par putt that kept him in range of Justin Rose, the 36-hole leader. And then on Saturday, his approach from a fairway bunker went over the 18th green some 25 yards up a walkway. He chipped down to 3 feet.

“Each round had a meaningful shot that probably went unnoticed by many,” he said. 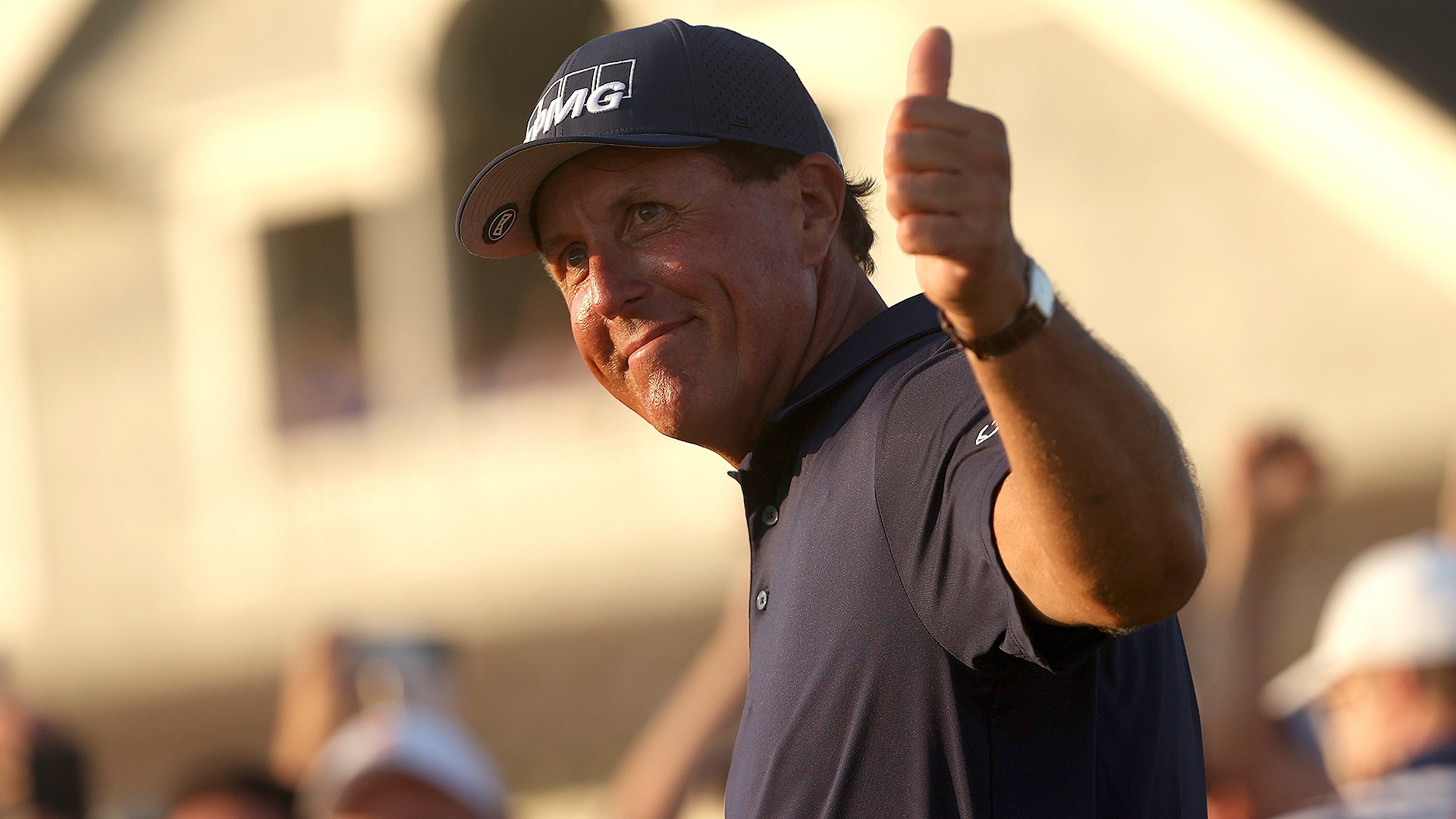 If anyone was curious whether a 50-year-old really could win a major, Phil Mickelson offered an early reminder he was no ordinary senior. Lefty had a one-shot lead over Brooks Koepka when he put his tee shot into the front bunker on the par-3 fifth hole. With a short game that has never left him, Mickelson holed out for birdie in perhaps the most memorable shot of his historic victory at Kiawah Island.

Mickelson has been around long enough to know that holing out will create a buzz, not to mention an enormous cheer.

“Because it was a bonus,” he said. “I wasn’t trying to make that. My expectation was, ‘Look, I need to get this up and down.’ I had just made a bogey. ‘I’ve got to stabilize this round and make a par on a hard hole, and I’ll make some birdies coming in.’ It was a nice bonus, but those aren’t the shots I rely on to win a tournament.”

Most pleasing to Mickelson was standing on the 18th tee, facing 322 yards to carry the bunkers on the right.

“Knowing if I carried those bunkers or was left, I was going to win this tournament,” he said. “And to know that I had the strength to carry that, that was another moment and feeling that I cherish.”

He also mentioned the 7-iron he hit into the wind at a back left pin over the bunkers at the par-4 10th to 12 feet for birdie as he began to pull away. And as much as he loves the long ball, he couldn’t help but mention the “cut driver” on the 16th that went past Koepka’s drive.

“Those feelings, those emotions, those moments — there’s a lot more — but those come to mind,” he said. 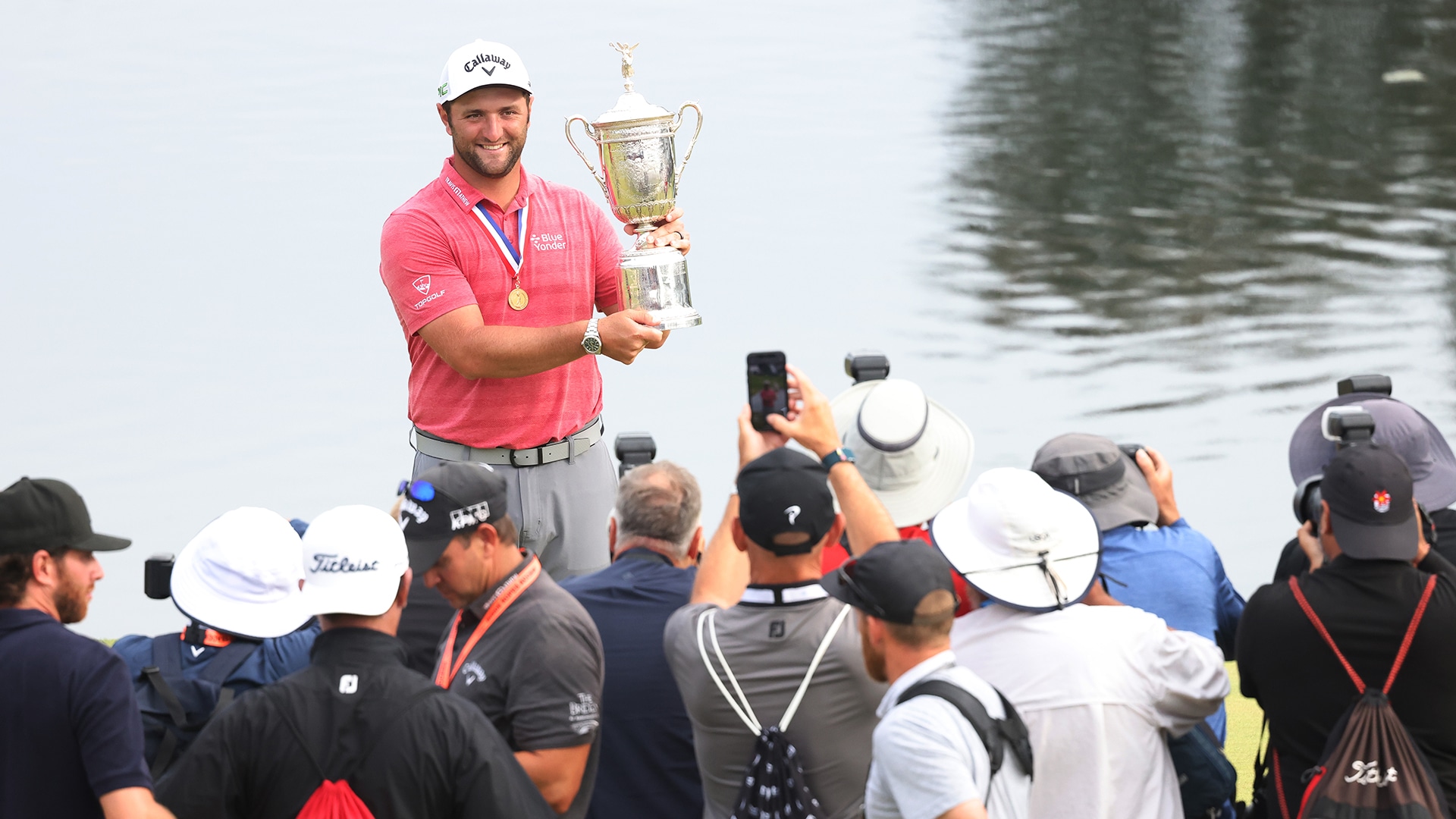 In the previous 120 editions of the U.S. Open, no one had ever birdied the last two holes for a one-shot victory. Jon Rahm might not have liked his odds standing over a 25-foot putt on the 17th hole at Torrey Pines that broke so sharply to the right that he ultimately played by feel.

“I’m standing over the putt and I look over a couple more times because I’m adjusting,” he said. “I’m feeling the break. Actually, right before I hit it I aim a little bit farther left than originally planned. And then it’s kind of funny. You can see as soon as I hit it, my head straightens because I’m like, ‘Man, that looks really good.’”

He faced another bender on the 18th, this one from 18 feet, and that made him even more nervous. It was for the lead, and he had a hunch he would be hard to catch.

“Very similar putt and on this one, as soon as I hit it — as soon as I finish that stroke — in my mind, I told myself: ‘This is going in. No question about it.’”

There were plenty of big moments along the way that put the Spaniard in that position. What stands out to him is a wedge and a putt from Saturday.

He three-putted the 14th from about 18 feet for double bogey, and then found trouble off the tee at No. 15 and couldn’t reach the green. He was five shots behind and fading when he hit a 50-yard wedge to a back pin that settled 5 feet away, and he made the putt to save par.

“That really kept me in it,” Rahm said. “The par after a double was very important.” 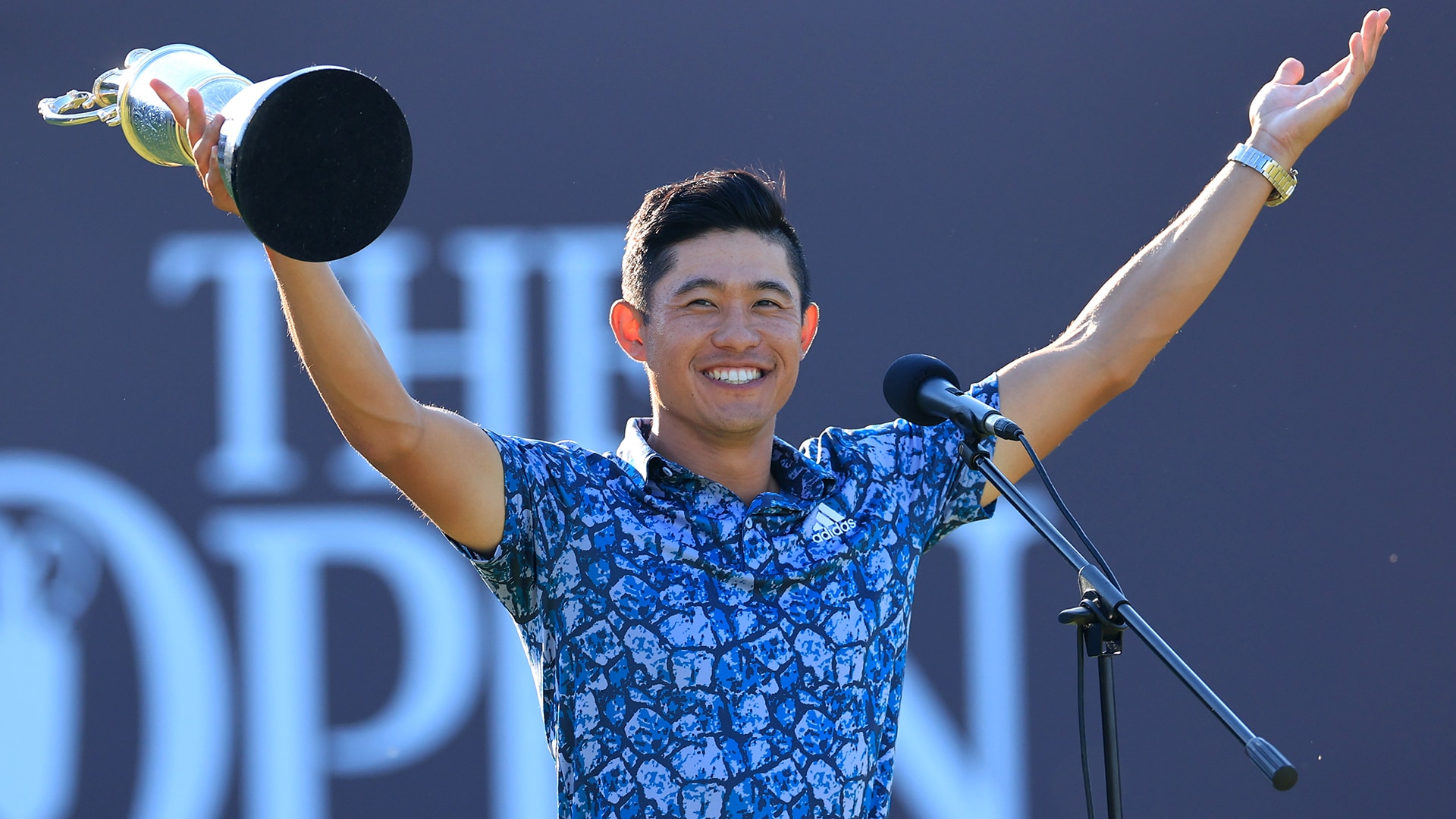 “It was a bit easier last year,” Morikawa said with a laugh when asked to consider his most memorable shot in the British Open.

A year ago, he hit a driver on the par-4 16th at Harding Park to 7 feet for eagle to win his first major. It’s one of the most famous shots in PGA Championship history.

The final round at Royal St. George’s was a clinic in ball striking, and he was equally potent with a wedge the times he missed the green.

“From an audience perspective, my putt on 14, the par 5,” he said of his birdie that gave him a two-shot lead over Jordan Spieth. “At that point, Jordan was catching up. I was maybe a yard or two away from a short birdie putt. Instead, I had 20 feet up the hill and it had some speed. That one kept the distance. Two shots with four to go, it’s a nice cushion to have.”

His wedge game around the green and his putting were never better. But when asked to consider a moment that stands out, one the average fan might not notice, Morikawa went with the 15th club.

“Between the ears,” he said.

Already 1 over for the third round, he hit a decent tee shot on the par-4 fifth when caddie J.J. Jankovic said, “Good shot.” The ball rolled to the top lip of the bunker, and Morikawa said he could sense his patience with his caddie and his game being tested. He hit the next shot well right and nearly off the property, hit a good chip but still made bogey. He was four behind.

“That’s when everything switched,” Morikawa said. “I looked at J.J. and said: ‘Look, we’re both doing our best. Let’s hit quality shots.’ Flipping that is when everything changed and got my mind straight.”

He didn’t make another bogey the rest of the week and won by two.