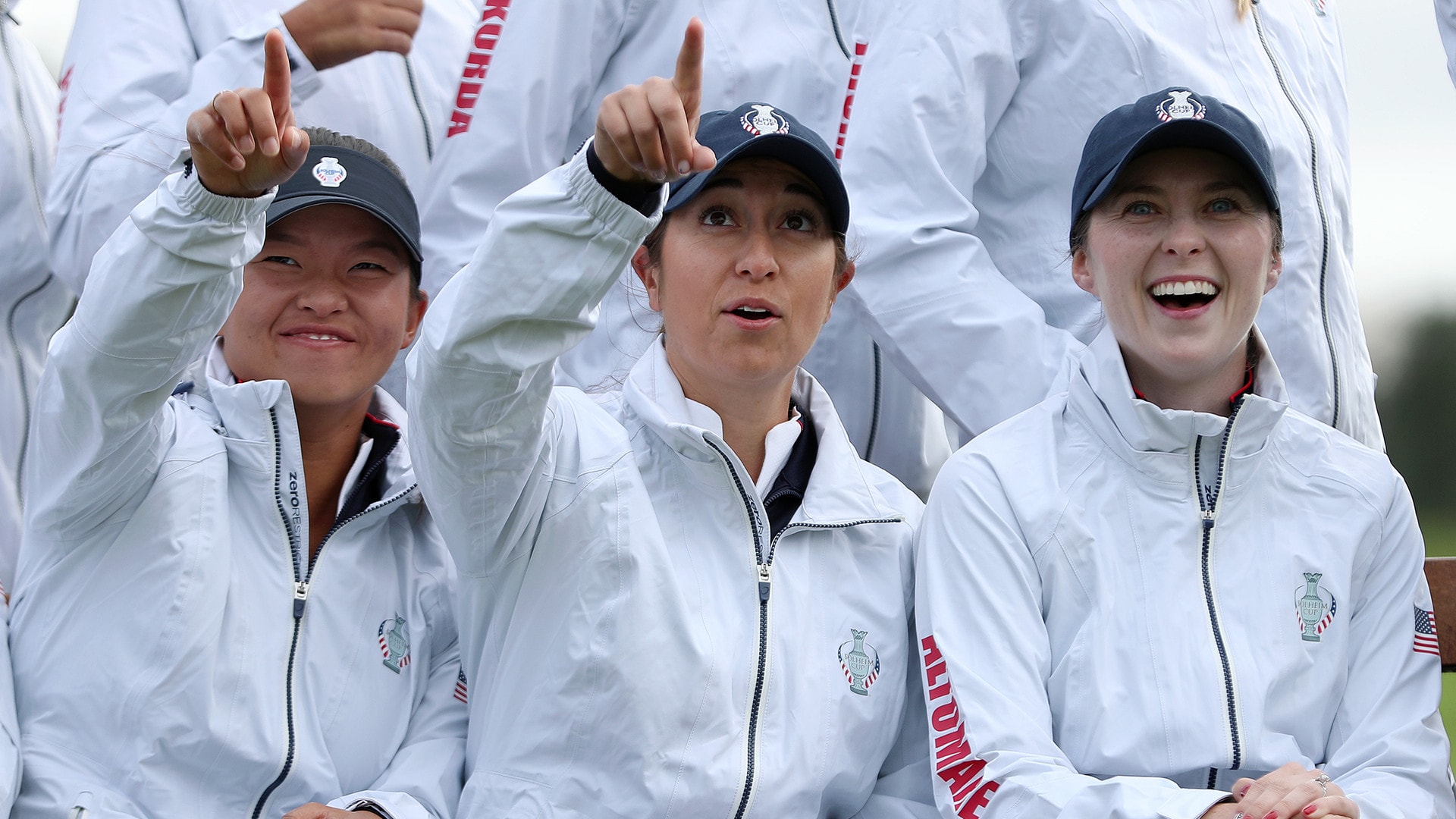 Pressel and Marina Alex will team to meet Europe’s Carlota Ciganda and Bronte Law in the opening-session foursomes matches.

U.S. captain Juli Inkster made it clear she won’t be hiding her rookies. She is sending five of her six rookies out in the morning and said she is committed to playing everyone before Sunday singles.

“I really wanted to get my rookies out there in the morning and get them playing,” Inkster said.

Alex is a rookie, but she is leading off with Pressel, who is making her sixth appearance.

“I feel like we’ve got some pretty good rookie alternate-shot players, so we’ll see how they do,” Inkster said.

European captain Catriona Matthew has three Solheim Cup rookies, and she showed her confidence in them, too. Law is a rookie but will be out in that opening match.

“I just felt like Bronte was champing at the bit to go,” Matthew said.

Also, Matthew is sending rookie Celine Boutier out in the second match, with Georgia Hall.

“I really don’t see any weak links on our side,” Matthew said.

Notably, American Danielle Kang is sitting in the opening session, along with Lizette Salas, Angel Yin and Ally McDonald.

The teams will play four fourball (better-ball) matches in the afternoon session on Friday. Here’s a breakdown of the opening foursomes matches: (note: all times ET; Golf Channel coverage begins at 3 a.m. ET):

The Skinny: Pressel is the winningest American in the event, with a 10-7-2 record. It speaks volumes about Alex’s mental makeup that Inkster is sending the Solheim rookie out in the very first match. Matthew equaled Inkster’s faith in her rookies, showing confidence in Law, also a first-time Solheim Cup player. It’s an intriguing match with some gritty, feisty scrappers. Law has some bravado about her match-play skills. And why not? She is the only player from Great Britain/Ireland to go 5-0 in a Curtis Cup.

The Skinny: Inkster is showing her confidence in the rookie Altomare, pairing her with Thompson, the highest ranked American in the world (No. 3). Thompson and Cristie Kerr were the most dynamic pairing in women’s team golf, combining to go 11-1-2 in Solheim Cup and UL International Crown play, but Kerr didn’t make the team this year. So Altomare is filling Kerr’s big shoes in this opening match. Hall’s a major championship winner (2018 AIG Women’s British Open). Boutier is a first-time LPGA winner this year (ISPS Handa Vic Open).

The Skinny: The Kordas will become the first sisters to partner together in Solheim Cup play. They’re two of the best drivers in the game, both ranking near the top in total driving as long but straight bombers. Inkster said her instinct was not to pair them together, but they really wanted the pairing. Masson and Shadoff don’t play long ball. They rely on accuracy, both thriving on hitting a lot of fairways and greens, a good recipe for better-ball.

The Skinny: A pair of Solheim rookies meet a pair of veterans in the anchor match to the morning session. Khang is a consistent ball-striker who doesn’t make a lot of mistakes. Park has become terrific with a long putter. Hull thrives in this event. She’s 7-3-1 in Solheim play and has never been beaten in foursomes (2-0-1). Munoz showed her match-play mettle winning the LPGA’s Sybase Match Play Championship back in 2012. Statistically, she is the second best European putter playing the LPGA this year, trailing only Ciganda in putts per GIR.