In a statement, PGA CEO Seth Waugh said he hopes the PGA, originally set for May 14-17, can be rescheduled this summer, “when it is once again safe and responsible to do so.”

“This is a reflection of a thoughtful process,” Waugh said. “We are and have been working in concert with commissioner Jay Monahan and our partners and friends at the PGA Tour to find an alternative date that works for all. We are very hopeful for a great outcome.”

Earlier this week the Centers for Disease Control and Prevention recommended the cancelation or postponement of any gathering of 50 or more people for at least the next eight weeks. That best-case scenario would have extended until the start of PGA week, but the Bay Area has been one of the hotspots for the coronavirus – local counties issued a shelter-in-place order to slow the spread of the virus.

The PGA’s announcement comes less than a week after Augusta National announced that the Masters has been postponed until a later date this year. It’s unknown when the tournament might be held, but the club is typically closed from late May through September because of the oppressive summer heat.

On Tuesday, the USGA announced that it was canceling local qualifiers for the U.S. Open but will "look to redesign qualifying" in the coming months. As of now, the USGA is continuing to "hold the dates" for both the U.S. Open and U.S. Women's Open. The U.S. Open is scheduled for June 18-21 at Winged Foot.

Brooks Koepka is the two-time defending PGA champion. No player has won three in a row since Walter Hagen (1924-27). 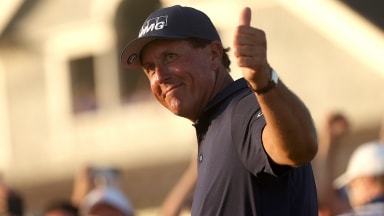