For Rory McIlroy, the trophy always means more than the money 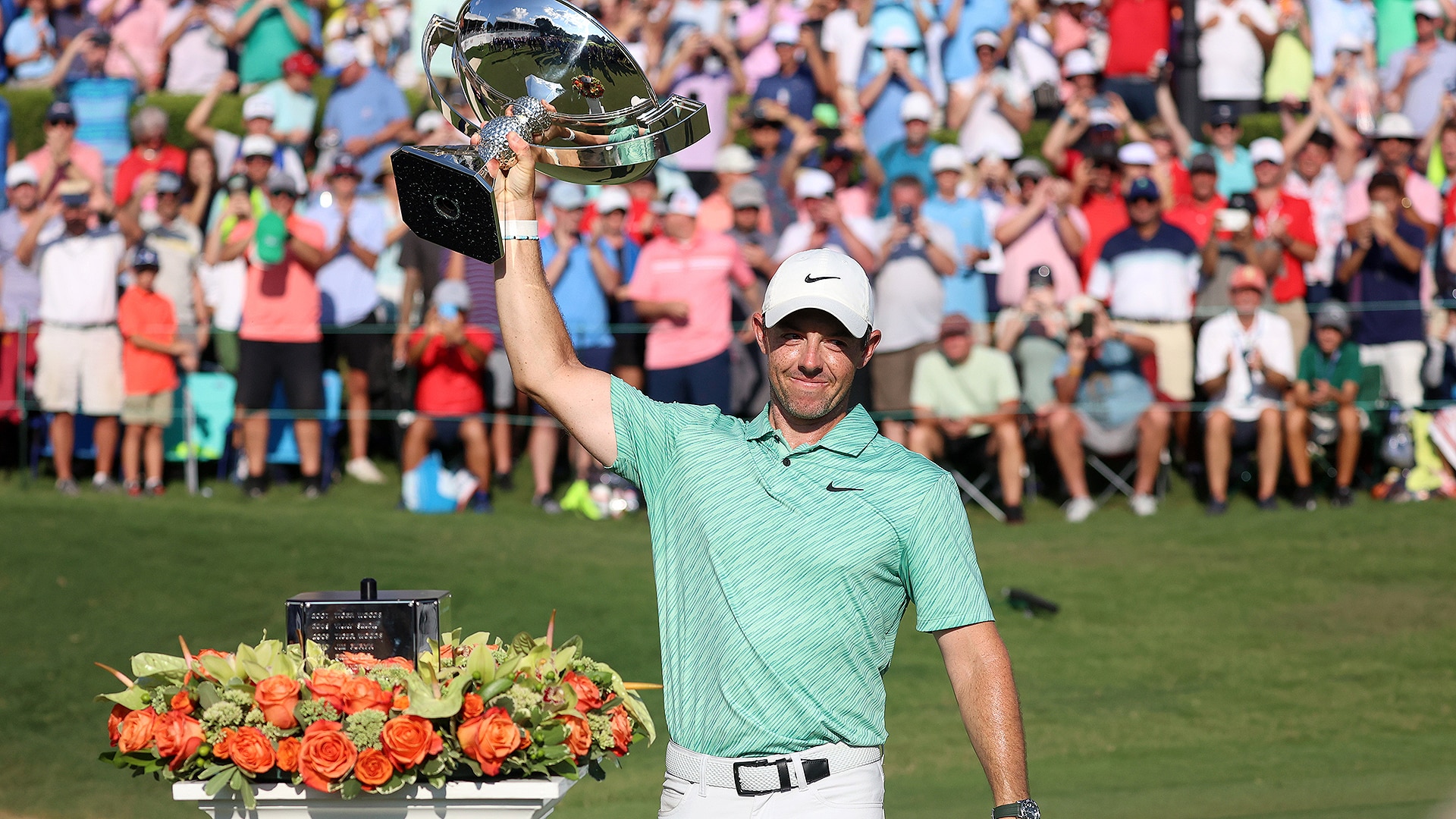 Tiger was offered this.

And even James freakin’ Piot was able to pocket this.

But in a tumultuous season that exposed the excessive greed of today’s players, here was a much-needed reminder that competition is best viewed by what you’ve accomplished, not what you’ve made.

Of course, that hasn’t always been the story of this Tour Championship.

Now in its 16th year, the FedExCup playoffs have been endlessly marketed by the Tour as the richest prize in golf. And it’s true: The season-long competition offered an extra $75 million in bonus money Sunday to already-deep-pocketed pros who keep their financial advisers on speed dial. This year’s edition handed out a record $18 million to the champion – and yet, that eye-popping figure didn’t even register to the two leading contenders. 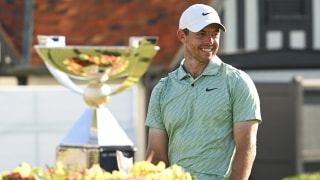 With a net worth that will soon approach a quarter-billion dollars, Rory McIlroy’s blessed life wouldn’t change demonstrably with another eight figures deposited into his account. Neither would Scottie Scheffler’s, already in the midst of the richest single season in Tour history; the windfall never crossed the mind of the 26-year-old who still drives a 2012 GMC Yukon with 175,000 miles on it and believes the perfect day consists of morning coffee with his bride and an afternoon cleaning the backyard.

“The money is the money,” McIlroy said. “It’s great, and we’re professional golfers, and we play golf for a living. That’s part of it. But I think at this point in my career, the winning and the journey and the emotions and who I did it with mean more than the check.”

And McIlroy’s unexpected triumph Sunday at East Lake was shared not just with caddie Harry Diamond, or wife Erica, or young daughter Poppy. It was shared by the entire Tour membership that has been scattered and shaken by a shifting professional landscape.

With the game fracturing at the elite level, McIlroy, 33, has emerged this year as the de facto Tour spokesman. He’s eloquent and well-connected, but he also cares deeply about legacy – his own, yes, of course, and also the Tour on which he competes. Just last week he spearheaded (along with Tiger Woods) an unprecedented players-only meeting that sought to clearly define the short- and long-term future of a tour under siege like never before. Their ultimate solution wasn’t a novel idea – the best players in the world should compete against each other more often – but actually implementing those changes, especially in such a short timeframe, felt like a seismic shift and moment of empowerment.

McIlroy has never complained publicly about the burden he’s shouldered, but he did offer a glimpse into his tournament week that was unlike any of the other 29 players in the field here at East Lake. He sat through calls with the PGA Tour Policy Board on Tuesday as they tried to push the schedule changes across the finish line. A day later, he immediately followed commissioner Jay Monahan’s press conference, serving as the frontman for the top players, before switching into businessman mode and revealing plans for a new primetime, tech-driven league that will debut in early 2024.

Each week, all year, has brought a brand-new State of Rory Address: his thoughts on the next wave of defections, his opinions on the indefinite suspensions given to LIV players, his solutions for how this hellacious mess could eventually get cleaned up. Once that is over, well, he pores over earnings projections and reassures conflicted players and fields calls from Tour leadership.

And yet, through it all, McIlroy has managed to play some of the best golf of his career this season: a pair of wins, top-10s in every major, the Tour leader in strokes gained.

“As much as I’m a willing participant in all of this,” he said, “I sometimes do need to remove myself for the sake of my golf game, and I tried to do that.”

His Tour duties over by midday Wednesday, McIlroy focused on landing one final title, even if, truthfully, he didn’t give himself much of a chance at the Tour Championship.

In the staggered-start format, he began the week six shots back of Scheffler. By the time McIlroy reached the third tee in the opening round, he was already 10 back. But he took pride in his resilience, recalling how, just a few weeks earlier, Tom Kim rebounded from a first-hole quad and won running away in Greensboro. McIlroy dug in and toughed out an opening 67 to stay alive, then backed it up with rounds of 67-63.

Still, McIlroy began the final round just as he started the event – six back – and faced the unenviable task of hunting down the world No. 1. A four-time winner this season, Scheffler is already a lock for Player of the Year and was looking to become the third consecutive top seed to capture the FedExCup. Threatening to blow away the field, he raced out to a seven-shot lead on Day 2, saw his massive lead dwindle before a third-round weather suspension, and then he restored his advantage with a flurry of early-Sunday birdies to cruise comfortably into lunch.

“I definitely had good momentum,” he said.

But that didn’t carry over into the final 18.

McIlroy noticed almost immediately that Scheffler didn’t have his best stuff in the afternoon. On the first hole, Scheffler left his lag putt 6 feet short and then misread the par putt. On the fourth hole, he hit a squirrely drive that traveled only 284 yards and led to another bogey.

“Those two made me think that I probably had a chance,” McIlroy said.

Scheffler made only two bogeys through the first 54 holes, but he dropped three shots in the first six holes Sunday. McIlroy pulled into a share of the lead after the seventh hole. By the 16th, he had the lead by himself for the first time all week.

“For whatever reason,” Scheffler said, “my swing wasn’t where it had been the first few days.” 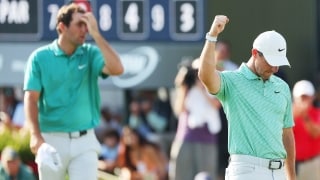 That led to an awkward conclusion. Scheffler was clearly scuffling, in the midst of a historic collapse, squandering not just the $18 million bonus but the perfect coda to his breakout year. But he was passed by McIlroy – the fan favorite, the new face of the Tour, the insanely talented player who had dusted himself off from a crushing Open defeat and capitalized on his top form. And so here at East Lake, they cheered and commiserated.

Needing at least a birdie on the home hole, Scheffler flailed his 4-iron into the greenside bunker, then blasted over the green and needed to make a 5-footer for par just to ensure a share of second place with Sungjae Im. Scheffler's one-birdie 73 matched the worst score of the day.

The stage clear, McIlroy marked his 3-inch par putt and tapped in for the win. In an unmistakable display of empathy, he offered a few subdued fist pumps and turned, almost sheepishly, toward Scheffler. Later, on the way to the scoring tent, he apologized to Scheffler’s family.

McIlroy’s final-round 66, coupled with Scheffler’s struggles, helped him become the first player to capture three FedExCup titles, breaking out of a tie with (who else?) Woods, and match the tournament record for the largest final-round comeback.

Why is he such a danger man in that position?

“Because I think out of anyone in the field,” he said, “I care the least about the money.”

Scheffler might disagree. He wasn’t misty afterward because of the money lost, or because he’d tied the largest-ever blown lead on Tour. No, it was because he’d come thisclose to another title. To another goal accomplished. To more prestige and history, to what truly mattered to him. He won $5.75 million and still was hurting.

“The money is great, obviously,” Scheffler said, “and playing professional golf for a living is such a gift. But for me, I don’t play golf for money. I play to win tournaments, and I play to have fun and do my best and see where the game can take me.

“Today the money definitely didn’t creep into my mind – I wanted to win the season-long title. I’ve had a really great year, and I wanted to finish it off with a win here, and unfortunately I wasn’t able to do that.

The interview ended, because there was nothing else to say. The most contentious season in Tour history ended in an unexpected way – with grace and humility, and the refreshing realization that money can’t buy a superstar’s dreams.