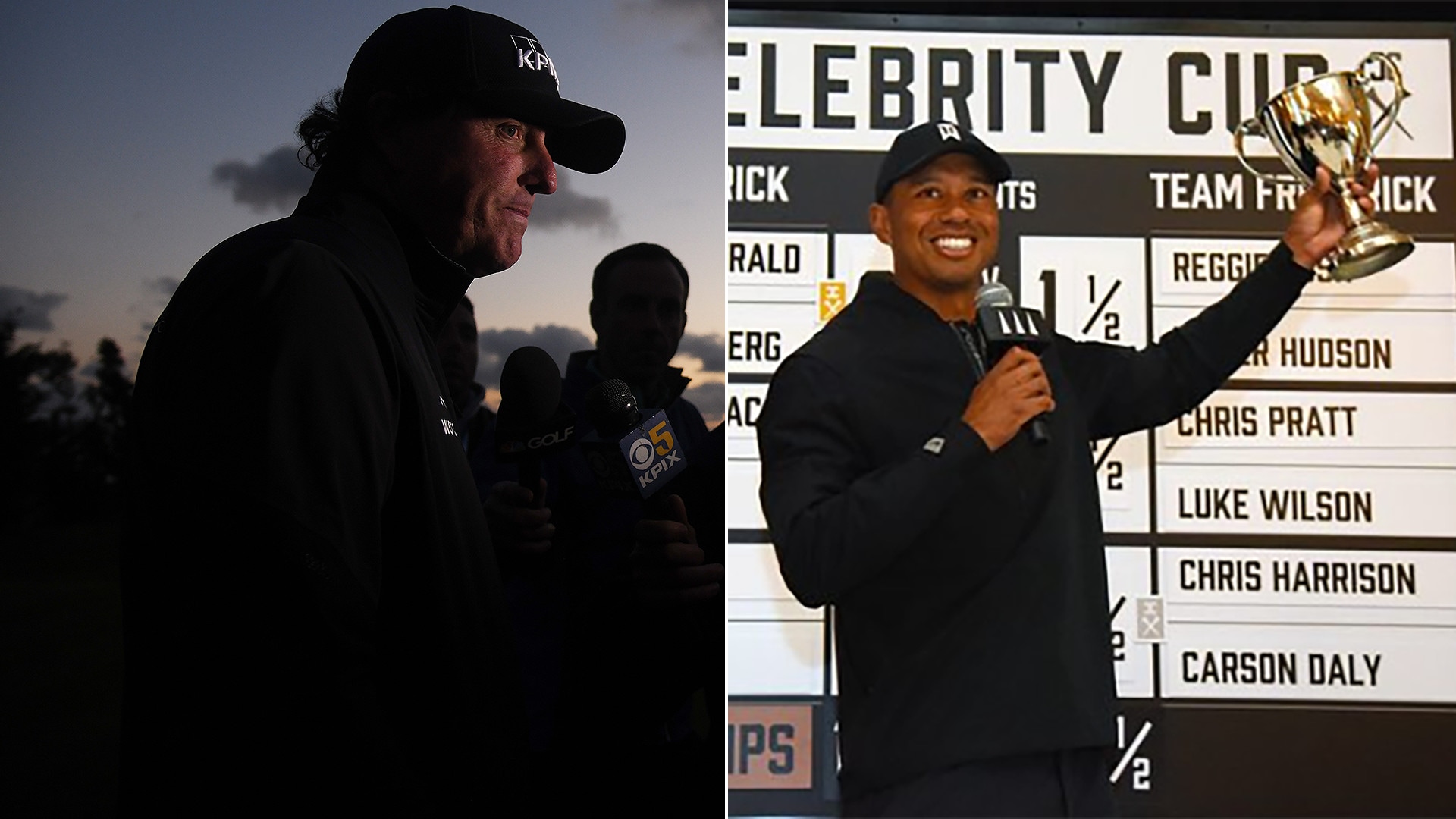 It’s no secret that Phil Mickelson’s creativity extends beyond his short game and all the way to his mouth.

So while plenty of fans watched him pick up his 44th PGA Tour trophy on Monday at the AT&T Pebble Beach Pro-Am, the moment that the internet will remember forever took place Sunday evening.

As the sun began setting and night fell over the Monterey Peninsula, the 48-year-old went into full used-car-salesman mode to plead his case for finishing in the dark rather than return for a dreaded Monday finish.

Phil's claim that "he could see just fine" was topped only by this incredible reaction to the horn blowing, when he realized all hope was lost and you can see the disgust literally sweeping across his face.

The look on Phil’s face when the horn blew. pic.twitter.com/9A2SNz1qvt

All of which made Lefty's reaction to winning Monday morning so oddly satisfying.

Golf Twitter's new leading man posted a photo of himself with the trophy captioned, "Not much more to say!"

Not much more to say! pic.twitter.com/XGY4gxJOzl

Classic Phil. Talking the talk all the way to the winner's circle.

Phil Mickelson left as the champion, but a wild week at Pebble Beach provided more than one winner.

Former Miss America and new Golf Advisor lifestyle correspondent Kira Kazantsev had herself quite a few days at one of the world's most iconic golf courses.

Kazantsev, who will also host Golf Advisor’s new show, "Golf Advisor Living," made the three-day amateur cut and eventually ended up finishing in a tie for 18th. Not bad for a 16-handicap whose pro, Ryan Armour, missed the individual cut by four strokes.

GRATITUDE post: You guys I could write a book about this week but yesterday on it’s own was one of the most special days of my life. To be one of 2 women to make the @attproam Sunday cut, finish the round in near darkness, feel so much love from the fans, and have my friends and family walk every step of the 18 holes with me was nothing short of a dream. Through rain delays, hail, exhaustion, and emotion, we made it to the end. Will share more about my experience soon but for now I am just so very grateful.

Kazantsev, 27, shared the experience with her Instagram followers all week, and then hightailed it to Riviera Country Club to hang out with Tiger Woods and Fred Couples at their inaugural Celebrity Cup ahead of the Genesis Open (more on that in a minute).

The golf kick continues! 😬 Not gonna lie, when Fred Couples broke down my Saturday 18th hole at Pebble to me today, that was pretty darn cool. Tiger congratulating me wasn’t bad either. Thanks to @tgrliveevents for having me co-host the inaugural #CelebrityCup ! Excited for the next few days at @genesisopen ✨ Outfit: @foraygolfusa

Not a bad little week at all.

In case you didn't get your fill of celebrity golf at Pebble Beach, Tiger Woods got a bunch of famous people together on Monday at The Riv for the first ever Celebrity Cup, put on for charity by the Woods' TGR Foundation.

While the event looked like your standard "famous people playing golf" photo-op, it is interesting to note that Tiger's team won, defeating Fred Couples' group of A-listers 18 1/2 to 11 1/2.

What an amazing day at the inaugural #CelebrityCup hosted by @tgrliveevents. Thanks to Fred Couples for serving as a team captain, to all the celebs for supporting @tgrfound, and to my winning team!

What a successful day at the @genesisopen for the inaugural #CelebrityCup. Thanks to all the celebs for coming out and participating 🏆

That's got to be a good sign for Woods' impending Presidents Cup captaincy, right? If he can lead a team of Larry Fitzgerald, Mark Wahlberg, Paige Spiranac, Nick Jonas, Kid Rock and Jerry Rice to victory, well then to quote the great philosophizer Kevin Garnett - "Anything is possible."

This guy would be perfect for Karaoke N' Roll.

WANT TO SEE A TRICK?

Francesco Molinari is the the Champion Golfer of the Year and a Ryder Cup hero but that may not be the most impressive thing a Molinari has done recently.

Behold this incredible trick from Francesco’s brother, Edoardo, where he memorizes an entire deck of shuffled cards.

Edoardo - who in a major twist of irony goes by the nickname “Dodo” - is no slouch on the golf course himself, with three European Tour wins on his resume.

However, after this Rain Man-esque display, a future involving the blackjack tables could definitely be in the cards.

With all due respect to Woods, Jack Nicklaus, Ben Crenshaw, Brad Faxon and whoever else you want to throw in there, the most clutch putter of our lifetime appeared out of the blue last week during a Utah Jazz game.

During a break in the action, Jazz fan Andrew Andreasen got a chance to make a series of five putts to win a cash reward totaling nearly $9,000. And he drained them.

All of them, right in the heart.

Andreasen, a special education teacher and the head girls golf coach at Clearfield High School in Utah, finished it off in style with a Tiger fist pump, and his amazing feat just adds to the working theory that if you need to make a putt with just about anything on the line, do it on a basketball court.

How about a "Spoiler Alert," Paul. Show some common decency.