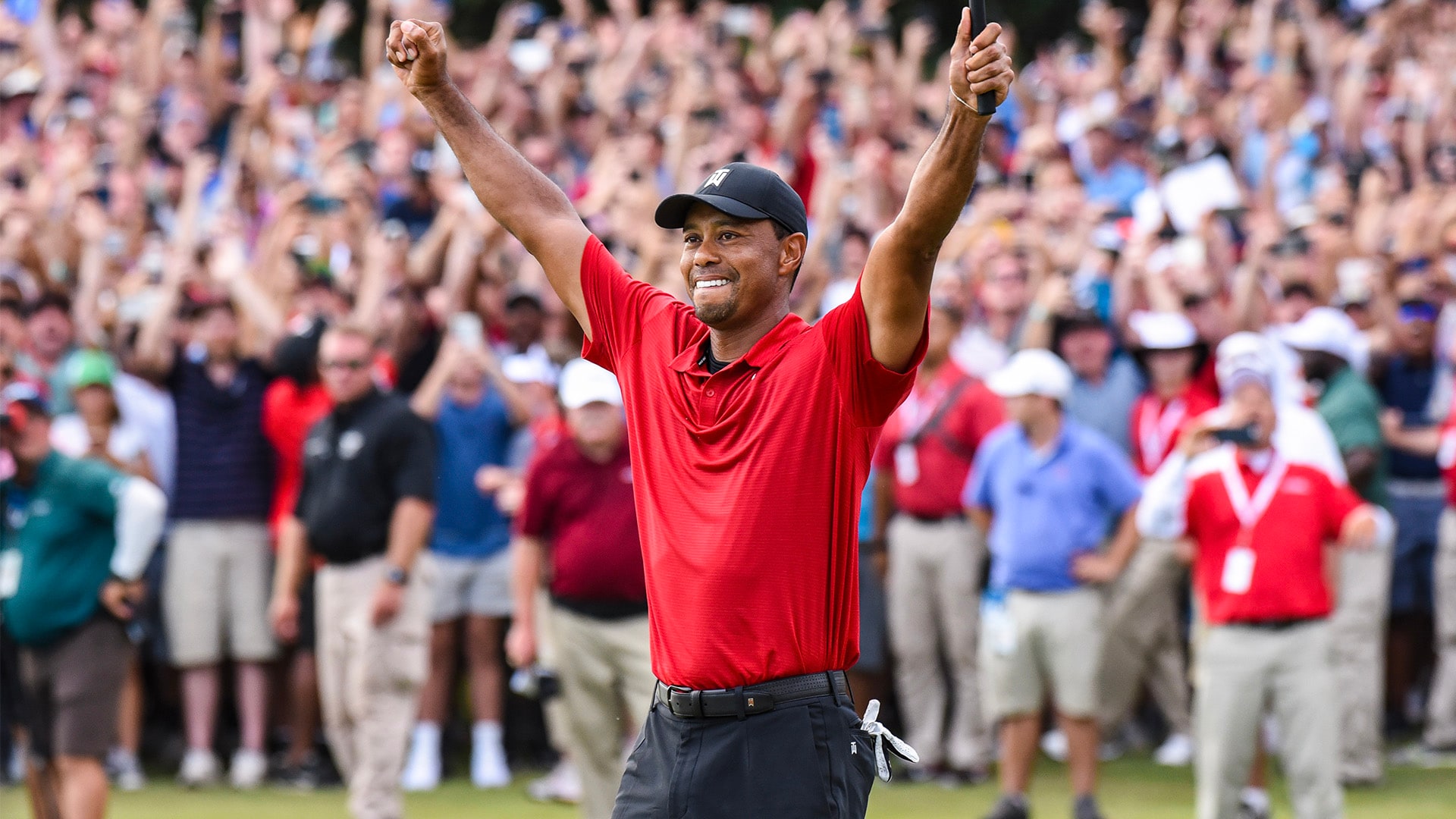 The Tour Championship begins Thursday, and it's hard not to think of Tiger Woods snapping a 1,876-day winless streak at East Lake three years ago.

This year, Woods' absence will once again hover over the FedExCup playoffs finale, which Woods has, aside from 2018, missed every year since 2014.

Woods has mostly been out of the public eye since his Feb. 23 car crash, but if anything gives hopes for another comeback, it's the 2018 Tour Championship.

Understandably, many point to the 2019 Masters as the watershed moment of Woods' most recent comeback, but it was seven months earlier at East Lake when the then 42-year-old gave the world a sight most people, including Woods, thought they'd never see again when, after four back surgeries, he notched his first win since August 2013 at the WGC-Bridgestone Invitational.

Following his 2018 triumph at East Lake, Woods said that a year prior, as he was recovering from two back procedures in as many months, he was unsure if his body would ever allow him to compete at a high level again.

“I was beyond playing," Woods said. "I couldn't sit. I couldn't walk. I couldn't lay down without feeling the pain in my back and my leg. That was a pretty low point for a very long time."

Woods returned to competition in December 2017, at his own Hero World Challenge, ranked No. 1,199 in the world. However, by the time the Tour Championship came around 10 months later, the narrative around Woods was different.

Things were looking up again. Woods finished T-2 in the Valspar Championship in March, T-5 the following week at Bay Hill, and soon after he posted his lowest round (65) at The Players, where he'd won twice. Later that summer, at The Open, he held the solo lead through 64 holes, but a bogey and double bogey on Nos. 11 and 12, respectively, spoiled the fairytale, and he finished T-6, though it was his best major finish since the '13 Open. That feat, however, was short-lived. Two tournaments later, he finished solo second at the PGA Championship after a closing 64.

"Just to be able to compete and play again this year, that's a hell of a comeback," Woods said.

But Woods did more than just compete at the Tour Championship. He shared the Day 1 lead with Rickie Fowler after carding a 65. Woods followed that with a second-round 68, sharing the lead with Rose. Then another 65 had Woods with a three-stroke advantage heading into the final round. At that point in Woods' career, he was 23 for 23 when leading by three strokes after 54 holes. But was this the same Tiger?

Good thing the 2018 Tour Championship was the last year before staggered scoring was implemented. Had it been a year later, Woods would have started at 2 under, eight back of FedExCup leader Bryson DeChambeau. But for one last time, all players in the field were given equal footing at the start of the tournament.

Despite just one birdie as part of a 1-under front nine and three bogeys on the back, Woods’ victory was all but locked up as he played the final two holes. Rory McIlroy, his playing competitor in the final group, was well off the pace, as he'd finish with a 74.

One uncertainty, however, was who would win the FedExCup title? Woods, who won it in 2007 and '09, had a shot down the stretch. But Justin Rose, who was a group ahead of Woods, birdied the 18th hole and Woods made back-to-back pars to finish, making Rose the only world No. 1 besides Woods to ever hoist the FedExCup. (Dustin Johnson would join that list last year.)

Rose's FedExCup win didn’t damper Woods' Sunday, though. The fans flooded the fairway as Woods and McIlroy walked to the 18th green, a sight more appreciated now after a pandemic that kept fans from tournaments for months. Yes, fans flooded Kiawah's fairway for Phil Mickelson's PGA win this year, but with COVID restrictions still in place, it didn't employ the same magnitude as Woods' moment.

Woods missed his birdie putt by inches, but he would tap in for a closing 71 and raised his arms for the 80th time in his Sunday red in what Dan Hicks called “the most improbable comeback in sports history” on the NBC broadcast. It was the highest-rated Tour Championship ever.

Could there be another comeback story? There are plenty of records Woods, now 45, may want a crack at, like Sam Snead’s record of 82 Tour wins, which Woods is currently tied with; Mickelson’s record of being the oldest player to win a major, which Lefty set at Kiawah Island in May at 50; and a chance to finally defend that 2018 Tour Championship win.

In December 2015, Woods said anything he else he achieves in his career “will be gravy.” He's won three times since.

Now, we'll wait and see if, health permitting, he'll give us another 2018 East Lake moment, but if not, it's more than anyone could have asked for.