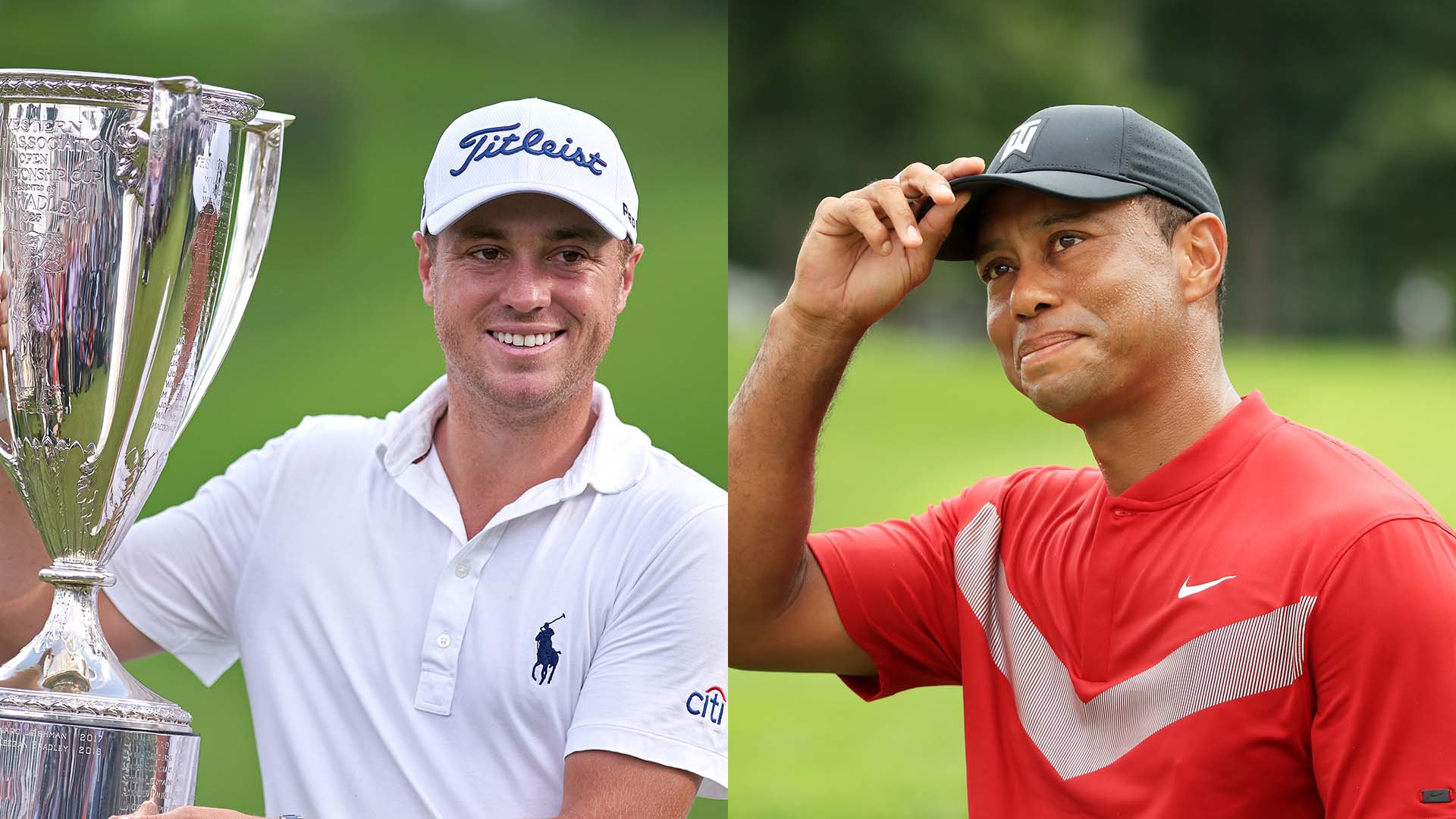 Justin Thomas is finally back in the winner’s circle, Tiger Woods’ season is officially over, Andy Ogletree’s fun is just getting started and more in this week’s edition of Monday Scramble.

More than a year removed from his decisive victory at the WGC-Bridgestone, Thomas returned to his cruise-control ways at Medinah, building a comfortable lead with a course-record 61 on Saturday before finishing off a three-shot victory at the BMW Championship.

The win ended a lengthy victory drought that included a nearly two-month stint on the disabled list with a wrist injury, no major top-10s (including a DNP at the PGA) and a near-fall out of the top 10 in the Official World Golf Ranking.

But Thomas is too talented to have been shut out for this long. Sunday’s win marked Thomas’ sixth straight year capturing a PGA Tour-sanctioned event and bumped him back up to fifth in the world.

1. Suddenly, Thomas is the favorite to collect his second FedExCup title in three seasons.

Go figure, but Thomas erased a disappointing season (by his standards) with one 2,000-point swoop, moving up 14 spots to No. 1 in the season-long points race. As a result, he’ll start this week’s Tour Championship at 10 under thanks to the Tour’s brand-new staggered-start format, two shots ahead of Patrick Cantlay, who jumped to second with a runner-up finish at the BMW.

“Definitely beats the position I was in at the beginning of this week,” said Thomas, who won five times, including a major, when he collected the FedExCup title two seasons ago. “I can certainly say, a thousand percent, I’ve never slept on a Wednesday lead.”


2. As for the rest of the playoff-finale field, Brooks Koepka, the overwhelming favorite for Player of the Year, will begin the week at 7 under, followed by Patrick Reed (6 under) and Rory McIlroy (5 under).

Jon Rahm and Matt Kuchar will be among the crop at 4 under while U.S. Open champ Gary Woodland joins Dustin Johnson as part of the 3-under group. Reigning FedExCup champ Justin Rose highlights those starting at 1 under while Bryson DeChambeau and the group at even par will begin Thursday in a 10-shot hole.

The jury is still out on the changes, but, if anything, it will be interesting to see how everything unfolds in Year 1.

3. One thing we won’t see this year at East Lake is a successful title defense. Defending tournament champion Tiger Woods won’t be making the trip after yet another disappointing finish.

Woods’ T-37 showing at the BMW dropped him to 42nd in points, ending what has been a season of highs and (mostly) lows – though as Woods pointed out Sunday, he is “the one with the green jacket.” Obviously, it doesn’t get much better than Woods collecting his 15th major title last April at Augusta National. But since his Masters triumph, Woods pegged it just six times with two missed cuts, a WD and only one top-10.

It’s somewhat hard to believe, especially considering Woods had been T-20 or better in four of five pre-Masters starts this season with a worst finish of T-30, at The Players. But he just couldn’t stay healthy – neck and oblique strains, general tightness and soreness – and as a result couldn’t practice or play as much as he needed.

Woods said Sunday that he won’t compete again until the Zozo Championship in Japan this October. That will be his only start of the fall, though he’s also slated to tee it up alongside Rory McIlroy, Jason Day and Hideki Matsuyama in a pre-tournament skins competition that week.

That means Woods will only have one opportunity to impress, well, himself. The U.S. Presidents Cup captain must announce four picks before December’s matches in Australia, and there’s quite the looming question: Will Woods give himself a nod?

5. Sixteen players who won’t need a Presidents Cup pick were officially announced Sunday upon conclusion of the BMW Championship.

Bryson hangs on to final US Prez Cup spot. Tiger has 4 picks for a group of candidates that includes:

6. Speaking of Mickelson, Spieth and Day, they were among those who saw their seasons end at Medinah.

Mickelson’s capped his season with some excitement, though of the wrong kind. His hotel caught fire after it was struck by lightning on Saturday night, forcing Mickelson to evacuate his top-floor room and, at least for a moment, putting his final round at the BMW in doubt. (Talk about a Phireside Chat!).

As for Spieth, he will be shut out of East Lake after another lackluster season that saw him finish 44th in points. Day finished 54th in the standings, a byproduct of posting just one top-10 post-Masters.

7. While JT was leading a birdie-filled assault on Medinah, the 119th U.S. Amateur final might have been the most exciting golf played on Sunday, as Georgia Tech’s Andy Ogletree battled back from a 4-down deficit after five – making just two bogeys in 35 holes – before taking down Vanderbilt stud John Augenstein on Pinehurst No. 2’s 17th hole.

There aren’t many trophies more stunning than the Havemeyer, and Ogletree, the world’s 120th-ranked amateur who hails from a little town called Little Rock, Mississippi, is now the third Yellow Jacket to have his name engraved on it, joining Matt Kuchar and Bobby Jones.


8. Ogletree’s triumph at Pinehurst earned him exemptions into next year’s U.S. Open and Open Championship along with a likely invitation into the 2020 Masters, where he’ll play alongside defending green-jacket winner Woods.

Of course, Ogletree also locked up a spot on the U.S. Walker Cup team, which will compete next month at Royal Liverpool in England.

While the U.S. side will surely be the heavy favorites on paper, winning won’t be an easy task. The Americans hold a 36-9-1 all-time record in the biennial matches but have lost five of the past six cups on GB&I soil. The lone victory during that span came in 2007 at Royal County Down, where Rickie Fowler and Billy Horschel helped the U.S. to a one-point victory.

Luckily for this year’s visiting side, there’s no scar tissue. Only Hagestad has played in a Walker Cup before, as he was part of a U.S. win two years ago that was so lopsided the Americans may still be winning holes at Los Angeles Country Club.

Pinehurst No. 2 fairly challenged competitors, playing more than seven shots over par in stroke play before producing some great match-play theatre. It forced players to hit a variety of shots, especially around the greens with its tight lies and short-grass runoffs, while the diabolical Donald Ross greens punished poorly-struck shots.

On the other hand, Medinah No. 3 was a pushover. Despite playing at nearly 7,700 yards, the former Ryder Cup host was left defenseless because of soft conditions, modern equipment and a design/setup that failed to challenge the world’s best. Just two of the 69 players in the BMW field shot over par for the week, and Thomas won at 25 under.

A week after finding himself in the middle of a slow-play firestorm on social media, the Mad Scientist was still on the defense as he teed it up in Wednesday’s pro-am at the BMW Championship.

Using another person’s phone and Snapchat account (presumably that of his pro-am partner), DeChambeau went on an unapologetic rant, one featuring a few profanities and one that unsurprisingly ended up all over the internet.

“Y’all can say whatever you want, but we're having a f---ing awesome time,” DeChambeau said in the video, which has since been taken down. “So screw all y’all haters, no big deal. I still love you all, even though you hate me.”

Screw y’all. Love y’all. DeChambeau obviously has some wires crossed as he continues to deny that he is a major part of the pace-of-play problem, noting that he often runs between shots while also blaming caddies and his peers – “We're on these guys’ asses all the time,” he said. He might not have been put on the clock two weeks ago at Liberty National, as he contends, but that doesn’t mean he’s not agonizingly slow. Anyone who watched the video of his two-minute drill on the green will agree.

You can run all kinds of tests – using accelerometers, tachometers, speedometers, whatever you want – but in this case the only test that matters is the eye test.

Remember guys, the first step to recovery is acceptance.

Stepping Up and (Hopefully) Speeding Up: Kudos to the European Tour for unveiling a plan to combat slow play. Among the highlights of this new initiative: stricter rules, less leeway with penalties, increased fines, new technology and, in some cases, smaller fields. Now it's your turn, PGA Tour.

First Man Out: Kevin Tway had made four straight birdies by the time he arrived at Medinah's closing hole Sunday. Unfortunately, he needed one more. Tway finished 31st in points, missing out on the Tour Championship by a single spot.

That'll Sting: J.T. Poston's season came to an end in brutal fashion as the Wyndham Championship winner bogeyed his final hole at the BMW to drop from T-11 to T-16, missing out on 36 extra FedExCup points in the process. Instead of earning the final ticket to East Lake, that spot went to Jason Kokrak and Poston settled for No. 32.

Briefly Unemployed: While Scottie Scheffler moved closer to fully-exempt status on the PGA Tour next season with a victory in the Korn Ferry Tour Finals opener on Sunday, Scheffler’s former Texas teammate Beau Hossler needed just one start to regain his card, tying for second in Columbus. Expect an improvement on last season’s 145th-place finish in points from Big Beau.

And 2019’s John Peterson is... Ricky Castillo. While Texas A&M grad Chandler Phillips took to Twitter to proclaim that he was the player who got “boned” this time around, the incoming Florida freshman should have a bigger beef with the USGA about its Walker Cup selections. Castillo is ranked ninth in the world, reached the semifinals of the Western Amateur and was upended by Augenstein in the Round of 16 at Pinehurst.

Seems not every Walker Cup hopeful was thrilled with the USGA’s decision: pic.twitter.com/5FE3IIKkqx

Tweet of the Week: Brooks Koepka. There were several strong candidates, but King Koepka flexed his thumbs muscles with this epic takedown of a Twitter troll, an apparently angry gambler who told Koepka to quit golf and go drive a truck (and then took down his tweet). However, Koepka's response remains – and it's straight cash, literally.

Blown Fantasy Pick of the Week: Harold Varner III. It was worth taking a gamble on HV3 after his T-3 finish at Liberty National, but Varner failed to break par in any round at Medinah, finished second-to-last and dropped from 29th to 38th in the FedExCup. 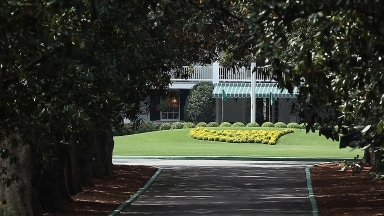 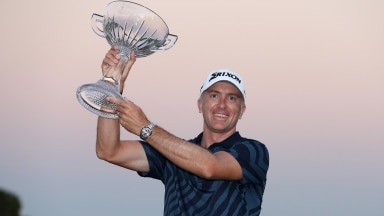