Monday Scramble: Boldly stepping up and cryptically speaking out 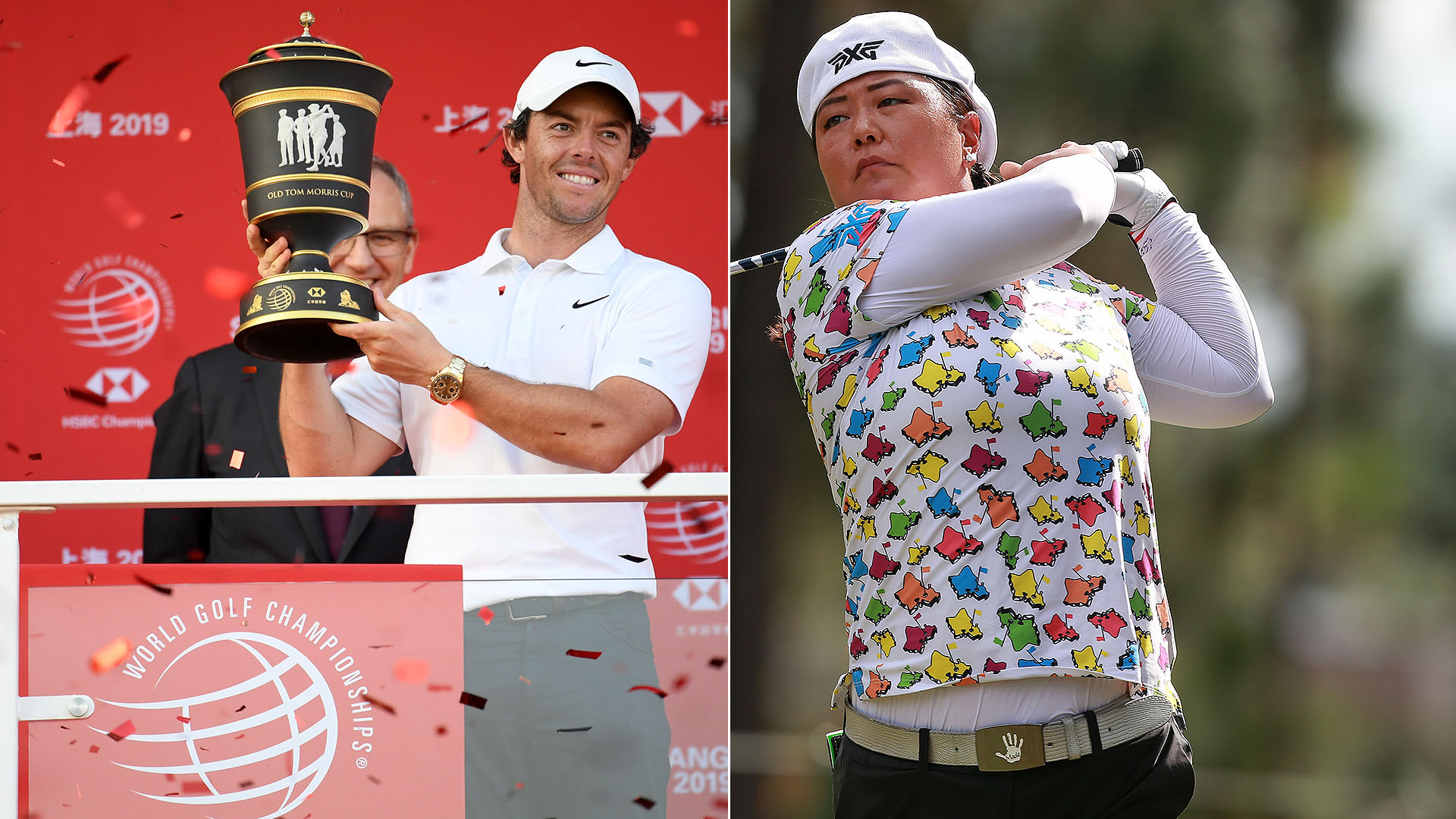 Rory McIlroy zeroes in on Brooks Koepka, Phil Mickelson discovers life outside the top 50, Tiger Woods readies to make his Presidents Cup picks, Brendon Todd comes (all the way) back, the LPGA Q-Series delivers drama and more in this week's edition of Monday Scramble:

Guess who’s back atop the FedExCup standings?

The somewhat-controversial choice for PGA Tour Player of the Year is already off to an auspicious start this season, after McIlroy captured his third career World Golf Championship with a playoff victory at the HSBC Champions in Shanghai.

It’s McIlroy’s fourth title in his past 15 Tour starts, which is important because he’s now closing in on Brooks Koepka’s No. 1 ranking (more on that below) and setting the stage for an titanic tilt in 2020.

It’s mathematically impossible for McIlroy to reclaim the top spot before the calendar flips. But if he continues this torrid form into the next year, are you going to bet against him topping King Koepka? 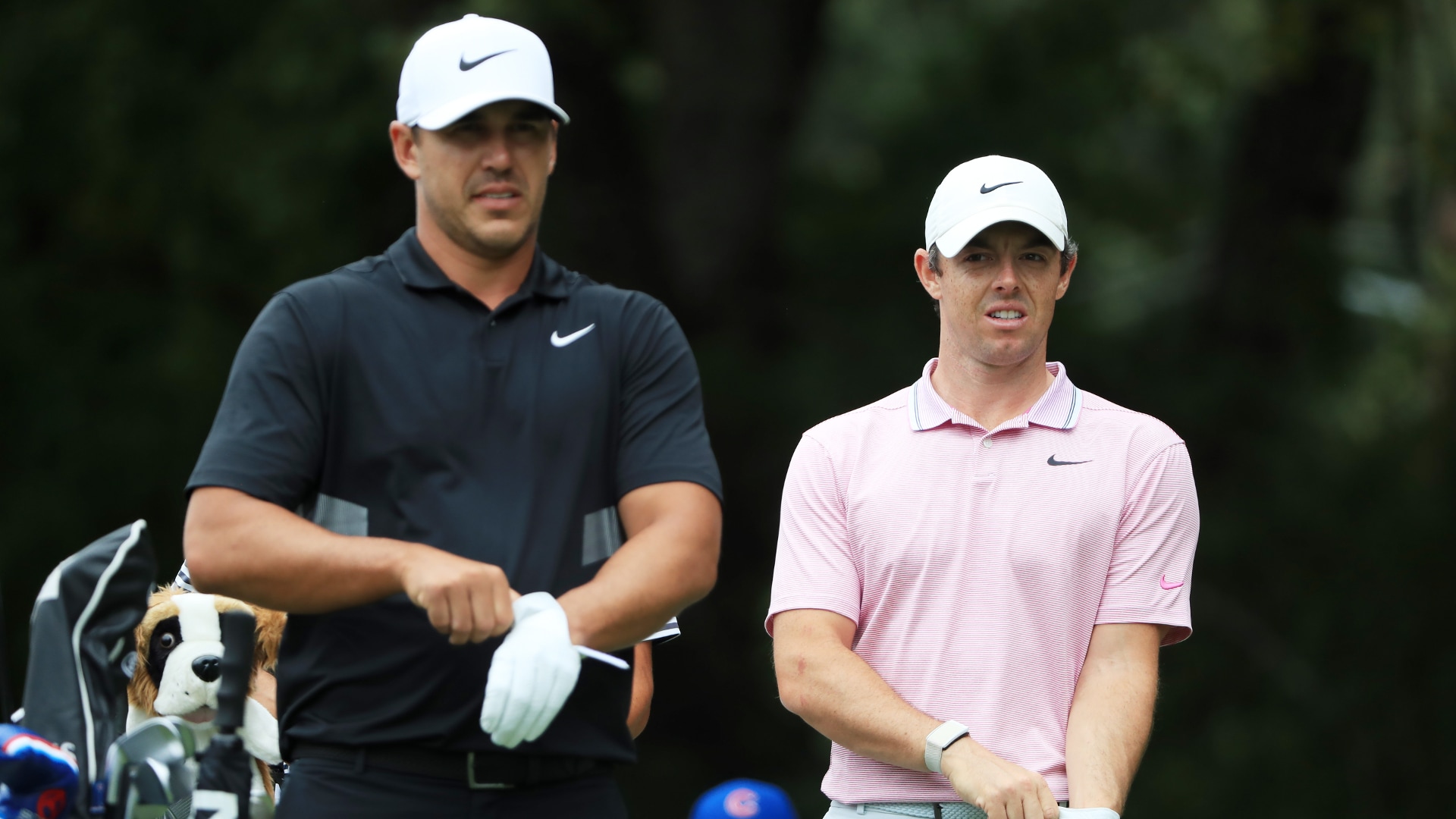 And maybe there isn’t. At least not yet, anyway.

But it’s becoming increasingly clear that Koepka and McIlroy are at the top of the class, and everyone else has work to reach them.

Here’s how those two players were positioned in the world ranking on Aug. 4, 2019:

And here’s how they sit now, with McIlroy scheduled to only appear once more, at the European Tour’s season-ending DP World Tour Championship in Dubai:

2. McIlroy was typically excellent in defeating a world-class field in China. He was bogey-free across his last 39 holes (including weekend rounds of 67-68), posted 19 under and played a perfect playoff hole to finally put away Xander Schauffele, hammering a majestic drive, blistering a 4-iron to 25 feet and then two-putting for the winning birdie.

Seriously. Have you seen a prettier drive than this:

3. What a game effort from Schauffele, who battled remnants of the flu all week as he tried to defend his title in China. He said he hoped to channel Michael Jordan’s flu game for four rounds – and then ended up going into overtime against the hottest player in golf. Starting the final round two shots back, Schauffele closed with 66 (including a birdie on the 72nd hole) to force extras.

Despite feeling under the weather, Schauffele made a whopping 28 birdies in 72 holes – five more than any player.

4. There’s one surefire way to get the stars to turn up during the supposedly sleepy part of the Tour schedule:

That’s exactly what greeted the players who made the trek to Asia for the stretch of tournaments that included the CJ Cup, Zozo Championship and WGC-HSBC Champions.

Not surprisingly, then, those events were won by three of the biggest stars in the sport: Justin Thomas, Tiger Woods, Rory McIlroy. All three are ranked inside the top 7 in the world – enough star power (especially in Tiger's case) to generate headlines even when it’s played in the heart of football season and broadcast live in the middle of the night on the East Coast. Though it’s early – really, really early – it also bodes well for the Tour moving forward that these guys are leading the charge in the season-long points race.

5. What was inevitable finally became official on Sunday: Phil Mickelson dropped out of the top 50 in the world rankings. It’s the first time he’s done that since November 1993.

Wrote more about that here – and how Mickelson’s run of consistent excellence isn’t likely to be matched anytime soon, if ever – and why it's the end of an era. In other news, he doesn’t have a top-25 finish in 14 starts. Mickelson should be in Australia – but as one of Woods’ assistant captains. 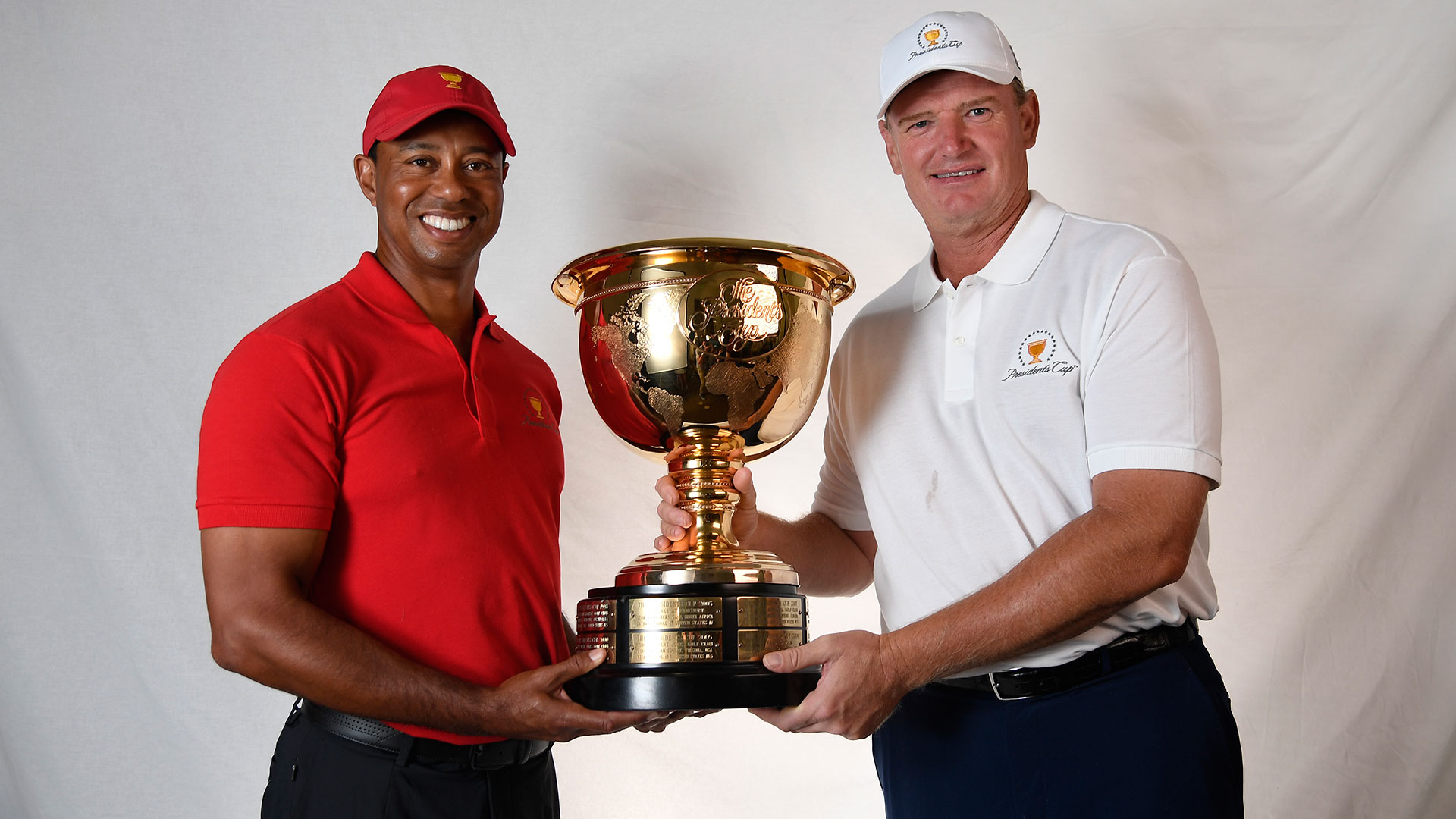 6. Both Woods (Thursday) and International captain Ernie Els (Wednesday) will make their wild-card selections this week. There are myriad ways they can go with their picks but it’s instructive to remember that the biennial matches are 10-1-1 in the U.S. team’s favor. And that the Internationals were nearly closed out on Saturday last time. If ever there’s a time for Els to take a risk, it’s now.

Who Els SHOULD pick:

Why: Day balances out the three rookies, all of whom have been playing well of late and could add a much-needed spark.

Who Els WILL pick:

Why: Though Els would love to pick Branden Grace instead of another rookie, the South African has been mired in a miserable slump, including a missed cut in Bermuda. He doesn’t have a top-10 in a stroke-play event since Super Bowl Sunday. An posted three consecutive top-15s during the Asian swing and has been a near-miss each of the past two cups.

The U.S. side is a little more complex, especially with Woods all but certain to pick himself after his rousing performance at the Zozo. Also complicating matters is the health status of Koepka and Dustin Johnson, each of whom is recovering from an offseason knee procedure. If they’re unable to go in Royal Melbourne, Woods is allowed to choose anyone to replace him.

Who Woods SHOULD pick:

Why: Woods himself is a no-brainer, while Finau narrowly missed the qualifying cutoff and Woodland, after winning the U.S. Open and discovering his new normal, showed up during the Asian swing. Reed’s final audition was a T-8 in China – his 10th top-20 in his last 13 starts, including a win during the playoffs.

Who Woods WILL pick:

Why: The newly married Fowler is the only question mark, but he showed plenty of flashes this year and is able to be paired with anyone on the team. Fowler’s selection would also (intentionally or not) send a message to Reed that his Ryder Cup comments had consequences. 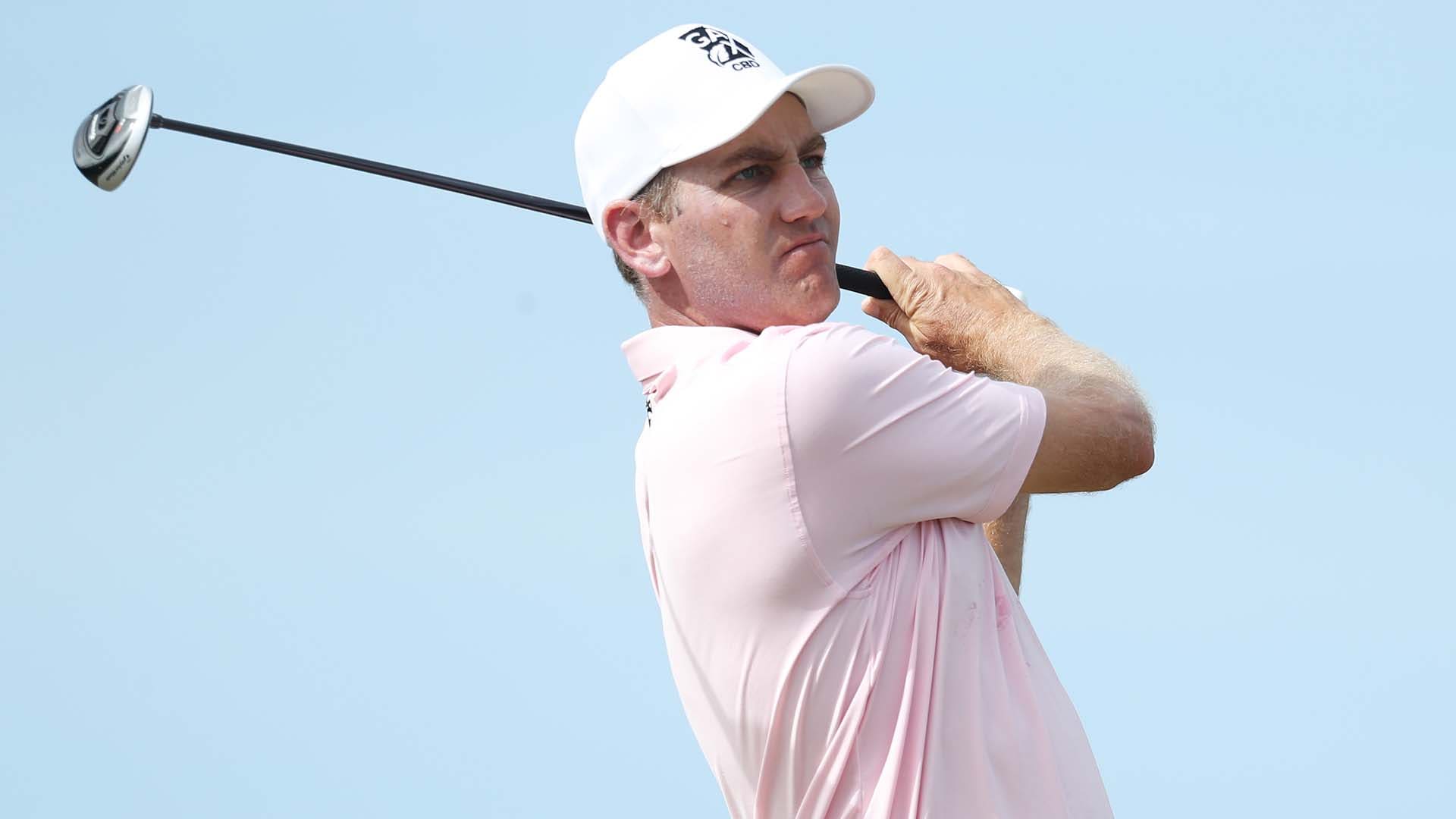 7. In the inaugural Bermuda Championship, Brendon Todd authored one of the greatest comeback stories of the year.

Todd was a one-time Tour winner (2014 Byron Nelson) but he’d fallen on such hard times recently that as of this time last year he instructed his manager to start looking into his post-golf career options. There was reason to start searching: He’d battled the full-swing yips, fallen outside the top 2,000 in the world and at one point missed 39 of 44 cuts on Tour.

Desperate for a fix, Todd hooked up with swing coach Bradley Hughes and read former MLB player Rick Ankiel’s book about the yips, finding comfort in the struggle.

The inconsistency remained – he’s missed nine cuts this calendar year, including four in a row before Bermuda – but he earned back his Tour card with a tie for second at one of the Korn Ferry Tour playoff events. He was incredible in Bermuda, none more so than during the final day, when he went 9 under for the first 11 holes and cruised to a 62 and four-shot win.

“I’m thrilled, over the moon,” he said. “This is just a dream come true and hopefully a springboard to a really long, successful career out here.”

But then it blew up into much, much more.

In the sixth of the eighth-round Q-Series tournament that determines LPGA status for 2020, Christina Kim spotted a rules infraction when one of her playing competitors signaled to another player’s caddie asking for confirmation of a club choice on a par 3.

Players and caddies try to glean this information all the time, of course, but never so explicitly. They usually just peek into the player’s bag to inform their decision.

Kim didn’t tell her playing partners of the rules breach at the time and instead waited until after the round. Then she posted that cryptic message on Twitter, followed by dozens more, in which she attempted to explain her side of the story.

Kim wasn’t wrong to bring up the infraction after the round – doing so in the middle of the round, especially during the high-stakes event, could have negatively impacted the players. Instead, they blew up on their own and failed to earn LPGA status. (You can read more about it here.)

Still, at least one of the players wasn’t happy with Kim – not for notifying officials of a rules breach (she owned that mistake), but rather the way Kim aired her out publicly.

A couple of things here:

1.) No, Kim should not have taken to social media to discuss the incident. That's unprofessional.

3.) Poor Dewi Weber, who was still dinged two shots even though she had no knowledge of the club-selection help. 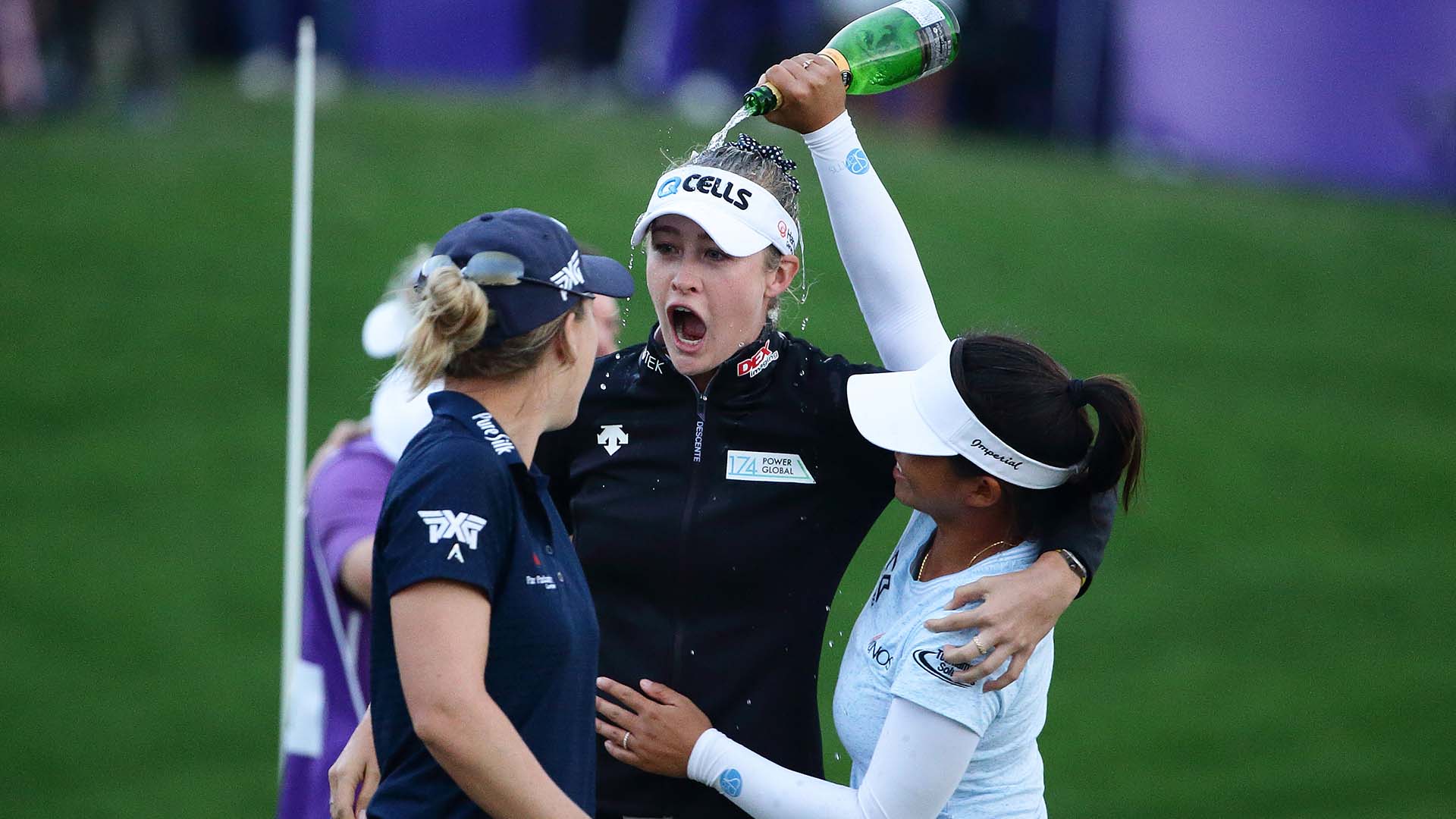 The Bump is Real: Nelly Korda. Perhaps it’s merely a coincidence, but since the Solheim Cup loss the Americans have won in bunches, with Cheyenne Knight, Danielle Kang and now Nelly Korda winning in a five-start span. Better late than never.

Taking It Deep: Julia Johnson and Parker Gillam. The Ole Miss junior tied the NCAA women's record for lowest 18-hole score with an 11-under 61 to win TCU’s tournament on Sunday, while Wake Forest's Gillam, playing as an individual, fired a 60 on his way to a win in the Bahamas. 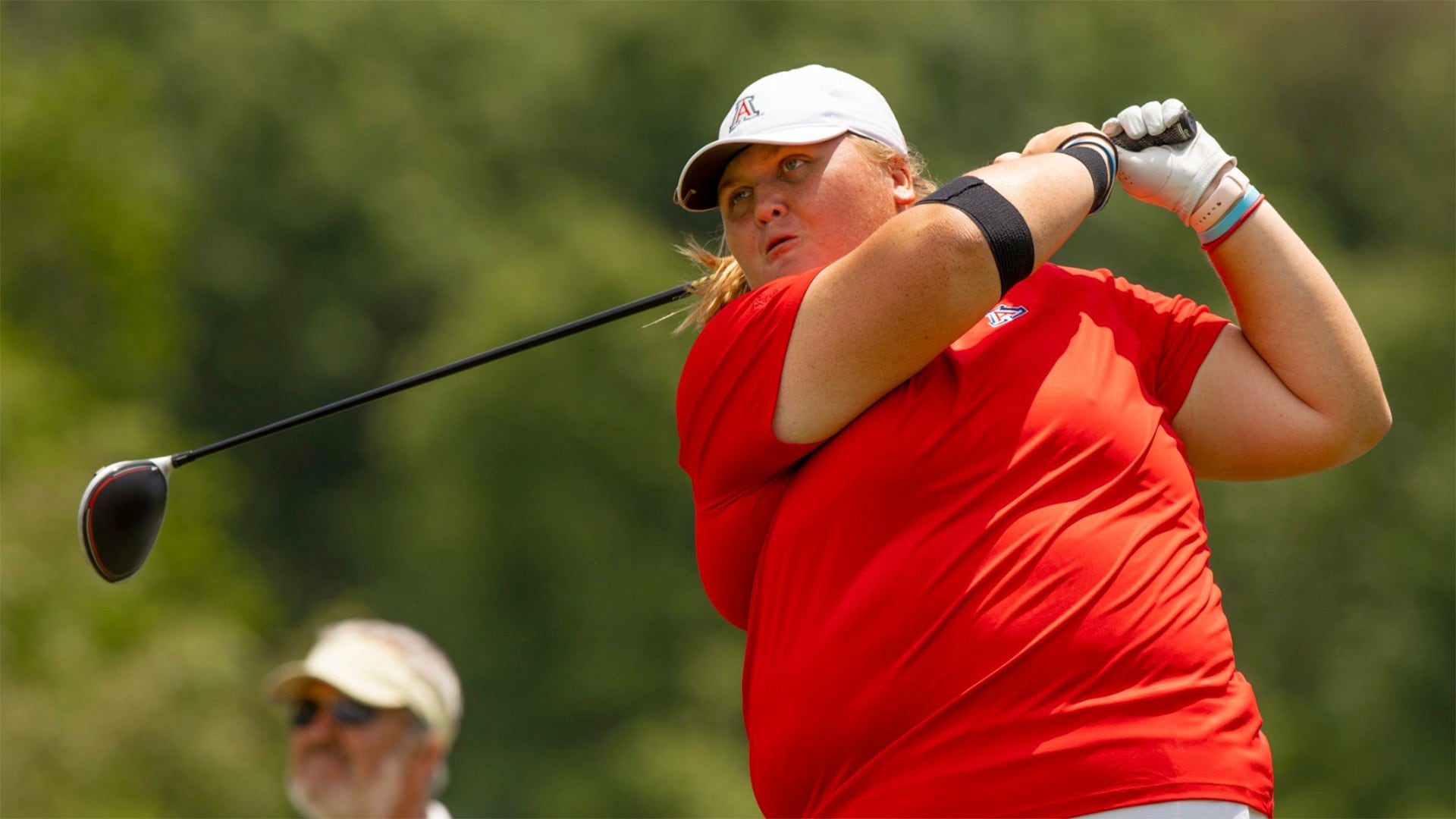 You Love to See It: Haley Moore. Earlier this year we documented the difficult journey of Moore, who was bullied as a kid and then blossomed into an NCAA hero. Well, she earned her LPGA card through the Q-Series, and the tears understandably flowed afterward. Awesome stuff.

Decisions, Decisions ...: Five college players advanced to the Q-Series finals and now have a life-changing decision on their hands. Jennifer Chang (USC) and Frida Kinhult (Florida State) have already decided to leave school and turn pro, but Stanford’s Albane Valenzuela (full LPGA card) and Andrea Lee (limited) both earned LPGA status and could begin at the start of the 2020 season or defer until after NCAAs in May. Florida’s Sierra Brooks also must weigh whether to return for the spring semester of her senior year or journey to the Symetra circuit.

The Heir to the King’s Throne: Chase Koepka. Brooks’ younger brother is on to the final stage of Korn Ferry Tour Q-School, ensuring that he’ll at least receive some starts on the developmental circuit next year. Most importantly: He’s earned this on his own, not because of his famous surname.

New Voice: Davis Love III. The 21-time Tour winner has officially turned the page on his playing career, signing on with CBS to be a full-time TV analyst. He’ll be used to replace Peter Kostis and Gary McCord, who were let go last month.

Blown Fantasy Pick of the Week: Tony Finau. If he wanted to leave Captain Woods with one final impression, it wasn’t a good one – Finau shot weekend rounds of 75-76 to tumble down the leaderboard and tie for 53rd. That’s a far cry from his past results at Sheshan International and marked back-to-back rough starts in Asia (T-59 at Zozo). Sigh. 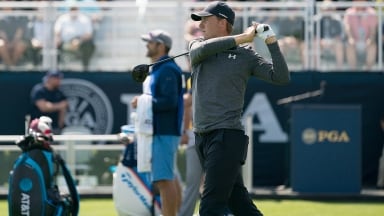 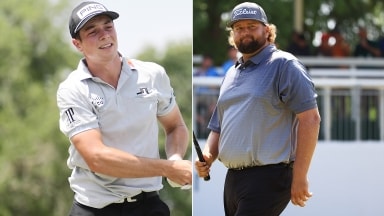 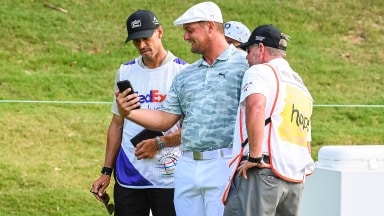