The day the Babes brought the house down 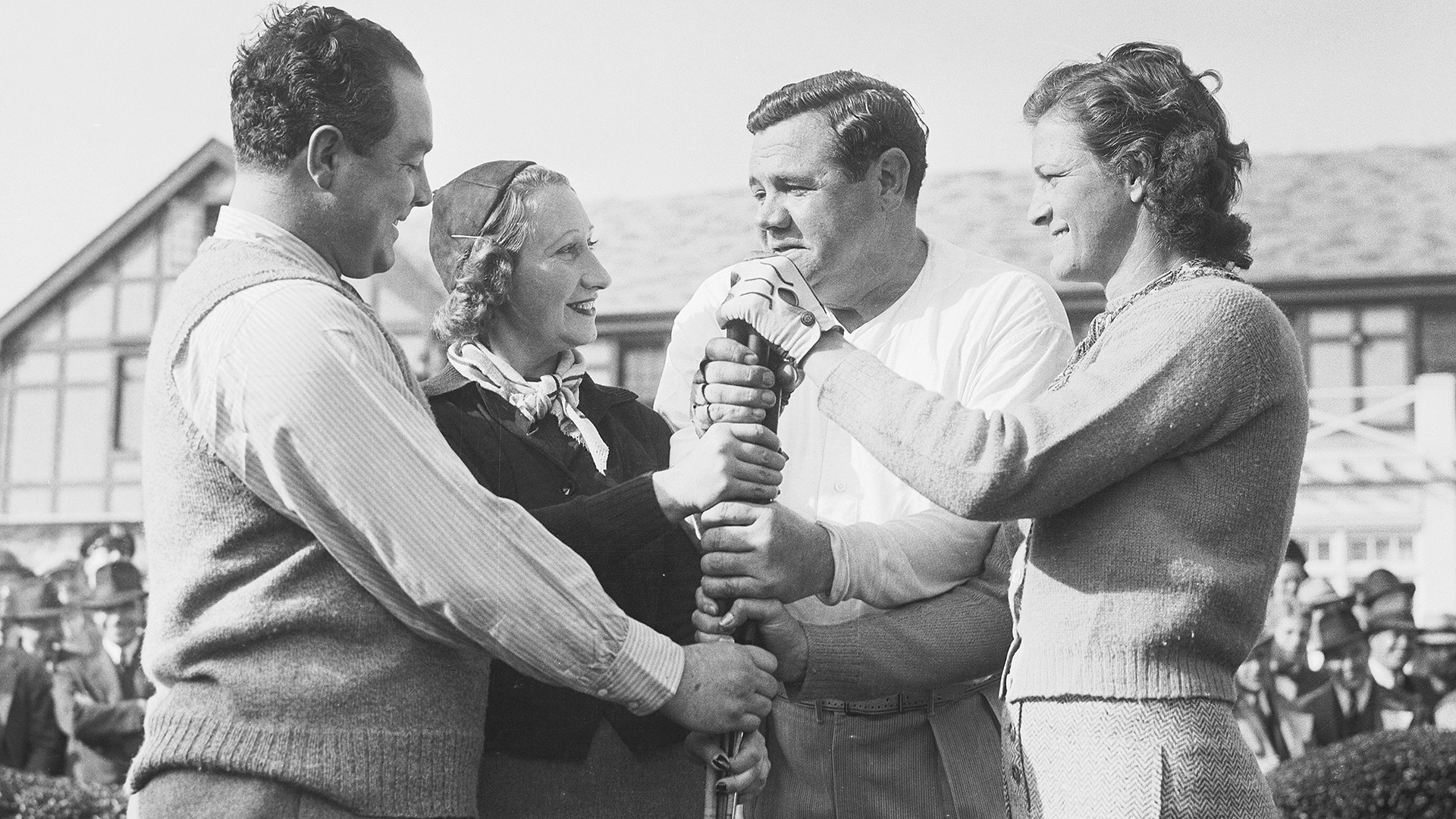 As Henrik Stenson attempts to recover from his ill-fated turn as a superhero, we are approaching the 80th anniversary of another golf "stunt" that featured two of the most genuinely colorful characters ever to tee it up.

On Nov. 14, 1937, Babe Ruth and Babe Didrikson (soon to become Babe Didrikson Zaharias) took part in one of the most bizarre charity events ever staged. The venue was Fresh Meadow Country Club in Flushing, New York, which in the previous seven years had hosted a PGA Championship (1930) and a U.S. Open (1932). But there was no resemblance between the seriousness of those two majors and the craziness that ensued in 1937.

The exhibition match, which was put on by the New York Journal-American, pitted the two Babes, Ruth and Didrikson, against golf hustler John Montague and a top local amateur, Sylvia Annenberg. According to The Associated Press report on the proceedings, 10,000 tickets were sold, costing a dollar apiece.

The New York Times compared the crowd to the one that witnessed Bobby Jones complete the Grand Slam at Merion in 1930, although its composition was entirely different; to quote the Journal-American, "Sixty percent of those present didn't know a bunker from a bung-hole."

The spectators did know stars when they saw them, though. None was bigger than Ruth, even though he was 42 and two years into retirement. He still held the records for home runs in a single season (60) and a career (714), as well as career marks for runs batted in (2,213) and slugging percentage (.690). In 1936 he had been voted into the Baseball Hall of Fame as one of its "first five" inaugural members, along with Ty Cobb, Walter Johnson, Christy Mathewson and Honus Wagner.

Beyond his athletic feats, Ruth was simply larger than life, with stories of his prodigious consumption of food and drink rivaling those of his tape-measure home runs.

It was a similar story with Didrikson. Then 26, she had won two gold medals and one silver for track and field in the 1932 Los Angeles Olympics. She didn't even take up golf until 1935. And like Ruth, her personality kept her in the spotlight even when she wasn't accomplishing amazing feats. Never lacking confidence, she was as quotable as she was talented. "The Babe is here," she once said upon arriving at a tournament. "Who's coming in second?" "It's not just enough to swing at the ball," she said on another occasion. "You've got to loosen your girdle and really let the ball have it."

Also an attraction that November day, though not quite at the level of Ruth and Didrikson, was John Montague. Born in New York, he migrated to California, where he fell in with the Hollywood crowd and became club champion at Lakeside. Powerfully built, he could belt 300-yard drives and execute trick shots with shovels and rakes with equal facility. After playing with Montague, legendary sportswriter (and Lakeside member) Grantland Rice called Montague "the world's greatest golfer."

Though Montague's on-course exploits were known, he kept the details of his past to himself. That all blew up, however, when he was arrested in 1937 in connection with an armed robbery in New York in 1930. Extradicted to New York in August, Montague admitted his real name was LaVerne Moore. Released on a $25,000 bond, he rented 17 rooms at a local inn for himself, family and friends during the trial. In the courtroom he was provided with alibis by his mother and two sisters, as well as one of the four robbers. Eventually he was acquitted. The November competition at Fresh Meadow was to be his first public exhibition match.

With no gallery ropes, the Fresh Meadow crowd was free to, well, crowd the fairways and greens. "This is worse than any World Series," said Ruth, who was knocked down on the sixth hole. "At least at the ballpark, the crowd has to stay in the stands." Balls had to be replaced after more than one shot as spectators, perhaps ignorant of the rules or perhaps just uncaring, picked them up and pocketed them. One of the spectators was former heavyweight champion James J. Braddock, who found the crowd too unruly for even his taste. "I'm getting away from here," he said after watching two holes, "before I get a foot in my face."

The match ended prematurely. Again, from the AP report: "At the end of nine holes, when everybody concerned, including the 10,000 spectators had enough, Montague and his blonde partner, Sylvia Annenberg, were approximately two down to Babe Ruth and Babe Disrikson. Approximately is the word, for Montague was unable to play out two holes and none of the quartet managed to hit the short ninth green after having hit their tee shots."

The end was a particular relief to Didrikson. "I don't mind sugar daddies in their proper place," she said, "but I hope I don't ever have to play chip shots again while sitting on their knees."

Her aversion to such indignities aside, Didrikson took to golf in a big way. In January 1938 she entered - there was no qualifying - the Los Angeles Open, the first woman to play in a national men's PGA event. She shot 81-84 and missed the cut, but she did come away with a significant prize. It was there that she met promoter and professional wrestler George Zaharias, and they were married 11 months later.

Didrikson regained her amateur status in 1942; four years later she won the U.S. Women's Amateur, then followed in 1947 by becoming the first American to win the British Ladies Amateur. She turned pro later that year and won the U.S. Women's Open in 1948. She would go on to compile a total of 41 wins in the LPGA, which she helped found in 1950, including 10 majors. Her last major win came in the U.S. Women's Open in 1954, the year after she had been diagnosed with colon cancer. She had undergone surgery just a month before, and played in the championship while wearing a colosomy bag.

Ruth openly sought a baseball manager's job, but there were no takers. His history of self-indulgence was not seen as a desirable attribute in someone responsible for managing others.

In 1938 the Brooklyn Dodgers hired his as first-base coach, but it was strictly a publicity stunt; he wasn't even asked to relay signs from the dugout. At the end of the season, Ruth resigned. It would be his last job in baseball. He continued to play recreational golf, and in 1941 he returned to the Fresh Meadow course as part of a series of exhibition matches against Ty Cobb to raise money for the USO. (At Fresh Meadow, Ruth won, 1 up, in front of only about 100 spectators.) In 1948 Ruth succumbed to cancer. He was 53.

Montague, who was 34 at the time of the Fresh Meadow match, returned to Hollywood, but had limited success trying to revive his career in golf. His health deteriorated, and in 1972 he died of a heart attack. He was 68.

The Fresh Meadow golf course, an A.W. Tillinghast design that had opened in 1923, was sold in 1946, when the members relocated to a defunct course on Long Island. Today the area is a residential neighborhood, 80 years removed from the events that put it in a brief, but bright spotlight.