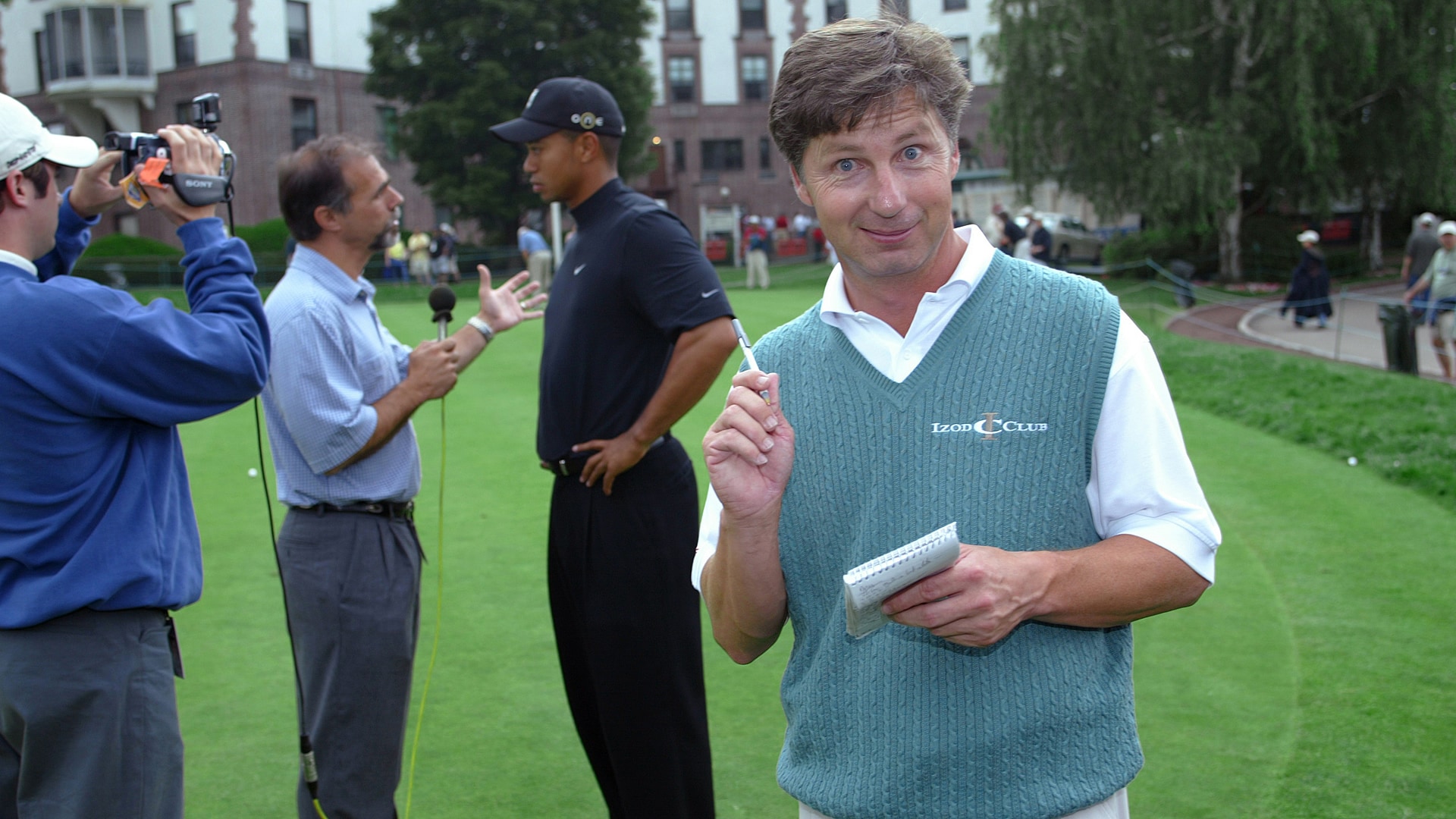 In the hundreds of pro-ams I’ve played in during my days as a Tour player and television commentator I believe I’ve seen every bad shot and bizarre occurrence imaginable. From Darius Rucker’s over-the-top, topped 3-wood that popped 20 feet straight up in the air and then backed up 20 yards when it hit the ground, to a man whose tee shot somehow managed to hit his left forearm (!!), without having hit anything other than the face of his club.

Almost without exception, the amateurs have been apologetic and quite sure I’ve never seen anything so appalling as their golf – even after I assure them that I have, to set them at ease and because it happens to be true. Besides the array of bad shots I’ve seen and great company I’ve enjoyed in those pro-ams, there is another common thread amongst these amateurs: the never-ending fascination with the life of a Tour player and behind-the-scenes TV, causing them to ask a lot of the same questions week in and week out. So on the odd chance that I have not played in a pro-am with you or that we don’t run into each other somewhere in an airport, here are the answers to the most often asked questions I’ve had over the years.

Who is the nicest guy on Tour?

When I played, it was toss-up between Dan Forsman, who was Sean Connery cool and Jimmy Buffet laid-back, and Joey Sindelar, who was incapable of anything but the most gracious behavior. In the TV world that I now inhabit – where we the media ask so much of the players – and social media, the Niagara of undiluted criticism, invites a hell’s stew of haters into their lives – Jason Day, Martin Kaymer, Rickie Fowler, Adam Scott and Lee Westwood pass every test with an enviable civility.

What is your favorite Tour event?

This is a lot like picking your favorite Instagram filter; in varying degrees they are all good, but you have to choose one, so for me it was the L.A. Open, as it was originally known. It is my favorite event for two reasons: Riviera Country Club and Rudy Durand.

Riviera is an old George Thomas design that for some reason stirred my imagination and on a few occasions brought out the best in me.

Rudy Durand is a Hollywood producer, writer, dealmaker and philanthropist, whom I met on a pilgrimage to Riviera in 1983. He moves in and out of the tightest circles in Tinseltown, but never plays favorites, once telling an athletic star of almost unimaginable popularity to get out of his cart and leave his course, because the star told a little kid he’d sign his autograph “later,” meaning on the odd chance the kid just happened to be in the right place at the right time, five hours later. Rudy looked at the star and said “You piece of s---, when do you think you’ll ever see that little kid again? Take two seconds and sign that autograph or get out of my cart and leave the club.” The star signed the kid’s hat.

In that cellphone zombie wonderland full of ethical and existential hurdles, Rudy holds spellbound all who are lucky enough to call him a friend, with fiercely loyal rhetoric and an original take on every business deal that has gone down in that town over the last 50 years, including a lawsuit he brought against Warner Brothers. Rudy, with no legal training, represented himself against a team of $500-an-hour lawyers, took his case all the way to the California Supreme Court and won. On the tape of the trial you can hear the lead lawyer for Warner Brothers becoming so unnerved by the questions from the judge that he got sick on the courtroom floor.

Rudy’s common refrain when holding court with current or would-be Presidents, mega movie stars or the waiter who stops at the table, is that “Friendship is serious business,” and so when I find myself in L.A., I always find myself involved in the serious business of friendship with one of the greatest friends any man could have, Rudy Durand.

Have you ever played with Tiger Woods?

Yes, twice, both times in 1998 and it was the most fun I ever had while being made to feel as if I had no business doing what I was doing for a living. He was a walking virtuoso, even in that year when he was supposedly in a slump. He hit it as far as he wanted, as high or as low as he needed and in any shape the hole called for. He did things no one had ever done before and stretched the limits of what we now imagine as possible, just as the bard Shakespeare did in another art. But 400 years later, nobody has come close to writing anything like Hamlet; centuries from now Tiger’s golf will still be the apex of achievement in our sport. I was grateful to have seen it up close, twice.

What is the best shot you ever hit?

One year I was playing the Northern Trust Open (I told you Riviera brought out the best in me) and I needed a birdie to make the cut. I was playing the long par-4 ninth hole with a narrow, deep bunker on the left side of the fairway about 270 yards off the tee, which is exactly where my tee shot ended up. I had a steep bank to get over and about 180 yards to the hole, which was cut in the back left of the green. I needed the loft of at least an 8-iron to get over the lip but the distance of a 5-iron to get to the green as the shot played all uphill. After chewing on the dilemma for a bit I thought if I could somehow blade a 6-iron, with all my weight on my back foot, it might just get over the lip and make the green. It was a one-in-a-thousand shot that I had never tried in my life but I didn’t have anything to lose, so I set up with the ball well forward in my stance and my weight back and swung as hard as I could. I absolutely spit-roasted the shot and it landed in the middle of the green, whereupon I promptly made the 30-foot putt to make the cut on the number. Making that shot even sweeter was the fact that on the weekend I shot rounds of 67 and 69 to finish 15th and made $40,000.

What’s the biggest mistake you’ve ever made on air?

It is a rare show that I don’t feel like something I did could have gone better, either in phrasing or in demonstrating a point with a video or graphic. Each breakdown is like a two-minute movie, and specific words have to be used to get to a graphic or to cue a video. The words matter as much as the timing. Everybody, in front of and behind the camera, is working to get it right but sometimes no matter how good the support is, you get the words wrong.

In Las Vegas one year, all the players were wearing pink ribbons on their hats for Breast Cancer Awareness Month and it was my job, as the director was slowly zooming in on the hat of one player, to talk about the significance of the pink ribbon. Which I did perfectly until it came time to give the name of the cause, which I said was Breast Awareness Month. “Cancer” was a fairly important word to leave out in that title, and unaware I had done so, I had no idea why I was hearing uproarious laughter and corrections in my ear from the production truck.

Do you still get nervous?

Before every show, I remind myself to have fun, but we are all just seconds away from saying something stupid.

Most legendary sports comebacks happen over the course of a few minutes. When it seems all hope is lost, an individual or a team somehow does the unthinkable or even what seemed impossible, and stuns the world. Americans can beat the Russians in Olympic hockey, or in golf, they can overcome, but also lose, a four-point margin on a Ryder Cup singles Sunday.

In the course of a game or a match, anything truly is possible. But for Tiger to beat Jack’s record, at a minimum, he needs five years, to say nothing of the fact that he needs to repair his body, his swing and his mind, and do all of this at an age that has been historically cruel to golfers. For Tiger to beat Jack’s record his career would have to be snatched from the flames. Add to that the newly stated fact from Tiger that breaking Jack’s record never really was his goal, and more than what he is physically capable of doing, it seems he’s not mentally interested in pursuing it.

If Tiger does go on to break Jack’s record, however, one thing is for sure: It will go down as the greatest comeback in the history of sports, not just golf.