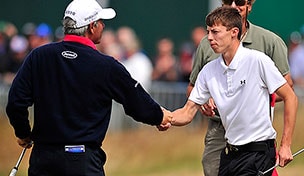 Getty Images
VIRGINIA WATER, ENGLAND - MAY 23: Jose Maria Olazabal of Spain talks to the media during a press conference for the 'Ole Seve' Pro-Am in aid of the Seve Ballesteros Foundation at Wentworth Club on May 23, 2011 in Virginia Water, England. (Photo by Richard Heathcote/Getty Images)  -

GULLANE, Scotland – Well, this is one way to spend the summer before college.

Matthew Fitzpatrick, an 18-year-old Englishman who will attend Northwestern this fall, holed a 10-foot par putt on the last to finish at 10-over 294 (73-76-73-72) and earn the silver medal as the low amateur at the British Open. The 2012 British Boys winner was five shots clear of fellow amateur Jimmy Mullen.

“I’m really proud,” said Fitzpatrick, who qualified for the Open by finishing second in local final qualifying. “What it showed me is I can sort of compete with these guys. But I do know where they are – they are better.”

In the final round, Fitzpatrick was paired with Fred Couples, who at age 53 is 34 years, 11 months and 28 days older than the teen star.

“He’s very good,” Couples said. “He doesn’t miss many shots, he hits it straight. As he gets bigger, he’ll hit it a little further, but he hits it plenty far. He’s not like one of these crazy bombers that you see. He’s good. At 18 you should putt well. He’s a good putter.”

Fitzpatrick, No. 9 in the R&A’s World Amateur Rankings, is following in Donald’s footsteps, in particular, by heading to Northwestern in the fall. When Fitzpatrick signed his national letter of intent, Wildcats coach Pat Goss said the youngster is the “most significant” player the program has inked since Donald.