Remembering Ouimet: What was in the bag? 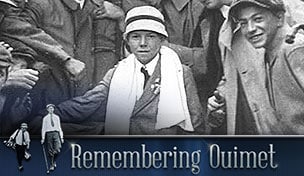 Getty Images
VIRGINIA WATER, ENGLAND - MAY 21: Paul Casey of England acknowledges the crowd during the second round of the BMW PGA Championship on the West Course at Wentworth on May 21, 2010 in Virginia Water, England. (Photo by Ross Kinnaird/Getty Images)  -

Exactly what clubs Francis Ouimet used to win the 1913 U.S. Open remains somewhat unclear, perhaps not surprising for an event that happened a century ago.

Eddie Lowery, the then-10-year-old caddie who had to carry them, said Ouimet played with 10 clubs – a brassie, spoon, niblick, six irons and a putter. He did not mention a driver.

In a 1963 video done by Boston TV station WGBH to mark the 50th anniversary of his Open win, Ouimet told interviewer Fred Cusick that Lowery “had to carry 10 (clubs). I probably used seven. At the outside, eight.”

Mark Frost, in his book “The Greatest Game Ever Played,” listed 10 clubs for Ouimet, plus a putter. The clubs and their rough modern equivalents:

Sammy (utility club with a rounded back)

In its reporting of the 1913 Open, The American Golfer listed nine clubs for Ouimet, including their lengths and weights:

In a Feb. 12, 2007 article, the USGA, which already had Ouimet's blade-style putter, announced that it had acquired four more of Ouimet’s clubs from the 1913 Open – his mid-iron, mashie, mashie-niblick and jigger (the rough equivalents of the modern 2-iron, 5-iron, 7-iron, and utility/chipping club). The then-director of the USGA museum, Rand Jerris, wrote that the mashie “stands out as perhaps the most important,” because it was the club that Ouimet used for his approach shots to the 17th hole in the fourth round and the playoff, setting up birdies both times.

Jerris wrote that the clubs were made by Tom Stewart, “widely regarded as the most accomplished clubmaker in St. Andrews, Scotland in the early decades of the 20th century. … Old Tom Morris, Harry Vardon, Freddie Tait, and Bob Jones were just four of the players who, like Ouimet, were clients of Tom Stewart. Stewart's characteristic trademark – a pipe – is clearly visible on the back of each of the Ouimet clubs.”

Jerris wrote that Ouimet gave the clubs to Lowery shortly after the Open, and Lowery held on to them for several years, but “concerns about their security prompted him to sell them to a good friend.”  The USGA, according to Jerris, acquired the clubs from a Connecticut couple “who had obtained the clubs from Lowery’s friend and subsequently cared for them for some 25 years.”

The fate of the rest of Ouimet's clubs is unknown.