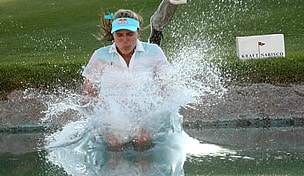 RANCHO MIRAGE, Calif. – Trying to beat the guys was the right idea after all.

Lexi Thompson just took Michelle Wie’s idea and turned it on its head.

Thompson didn’t grow up dreaming of honing a game good enough to play the PGA Tour someday. She grew up trying to keep up with older brothers Nicholas and Curtis in three-way matches in the “Backyard Five,” a regular competition over a loop of five holes that wound around their home at TPC Eagle Trace in Coral Springs, Fla. She’s the baby sister who hated losing to her brothers because it meant she would have to do their chores. There’s no more profound analysis of why the 19-year-old Thompson is rocketing up the ranks of the women’s game.

That’s the irony of Thompson’s breakthrough Sunday at the Kraft Nabisco Championship. In becoming the second-youngest player to win a major, Thompson overwhelmed Wie in a head-to-head final-round showdown. Wie made a name for herself as a teen phenom wanting to play the best men in the world, and she got beat Sunday by the one woman in the game who plays most like a man.

Thompson played bomb and gouge around Mission Hills Country Club. She was second in driving distance for the week.

“Everyone I know who sees Lexi up close, who sees her play in person, from caddies to PGA Tour pros, says, `Dude, she doesn’t hit it like a girl. She mashes it,’” Nicholas Thompson, the oldest of Lexi’s two brothers, told GolfChannel.com. “She amazes people with some of the shots she can hit.”

Nicholas is a PGA Tour pro. He watched Lexi’s victory on television after tying for 24th at the Shell Houston Open. He isn’t alone marveling over how his sister can overpower her competition.

As much as Thompson overpowered the Dinah Shore Course Sunday, she closed out her fourth LPGA title, her third in her last 12 starts, with a complete game. Her bogey-free 4-under-par 68 was the best round of the day, leaving her with a three-shot victory over runner-up Wie.

Thompson’s putting, deemed a weakness in her game in the past, never let her down. She rolled in a 15-foot birdie at the first hole and never looked back.

Late last year, Lewis warned folks what might be coming.

“As soon as she figures out her putting, she’s going to be unbelievable,” Lewis said at the season-ending CME Group Titleholders. “She’s hands-down the best ball-striker on tour.”

Lewis was there when Thompson made the traditional champion’s leap into Poppie’s Pond Sunday. She helped douse Thompson with beer in the celebration. Lewis was asked if this is the kind of performance she saw coming when Thompson’s putting came together.

“This is it,” Lewis said. “Her putting is what got her here today,” Lewis said. “Her ball-striking has always been good. It’s something she has relied on for so long, but the putting has been her thing. Over the last six months, though, you could see her starting to trust her stroke, believing in herself.”

That doesn’t portend well for the rest of women’s golf.

“I think this is her time,” Nicholas said. “I think this is just the start of what’s possible because she has so much talent and she’s still so young and she’s really just getting into training and working out.”

Morgan Pressel won the Kraft Nabisco when she was 18. She’s the only player younger than Thompson to win a major.

“This wasn’t unexpected,” Nicholas said. “It was just a matter of time.”

Scott and Judy Thompson, Lexi’s parents, will tell you the success their children enjoy is intertwined. They’ve made each other better. Nicholas is 31, the brother who paved the way into professional golf. Curtis is 21, a standout at LSU.

When Lexi jumped on her bike and raced after her brothers to the golf course as a little girl, she learned a wonderful paradox. She learned sometimes keeping up is the best way to get ahead.

“Lexi plays aggressively because of her brothers,” Scott said. “It’s how she learned to play keeping up with them. She wasn’t aiming away from pins today.”

She couldn’t beat her brothers playing that way, and it’s a large reason she’s becoming so tough to beat.