TPC Treviso Bay vs. Old Corkscrew: Who's the toughest bully in southwest Florida

ESTERO, Fla. -- Without a doubt, the TPC Treviso Bay in Naples and Old Corkscrew Golf Club in nearby Estero are the two toughest bullies on the block for public players visiting southwest Florida.

It's not a coincidence, either. Both big-name designers -- Jack Nicklaus at Old Corkscrew and Arthur Hills at TPC Treviso Bay -- were hired to create challenging tracks geared toward tantalizing and teasing private club members who are generally better players than Average Joes.

Some first-timers get so beat up by Old Corkscrew and TPC Treviso Bay they swear never to return. Too bad they'll never learn to appreciate the nuances of each place.

Everyone is encouraged to play up a tee box by starters at both courses, but even then, the slope ratings from the forward tees are exceedingly high. The gold tees, the third set at the TPC Treviso Bay, boast a slope of 141 from 6,421 yards. The whites, the equivalent at Old Corkscrew, play 6,262 yards with a slope of 129.

Why do golfers tolerate so much abuse?

It's simple: Old Corkscrew and TPC Treviso Bay remain two of the best (if not the best) public golf courses in the region. They're situated in serene, natural environments with no houses in sight. Their routings are good enough to host top tournaments. And they're conditioning remains on par -– or better -- than most private clubs.

Stewart Cink has never broken par after several rounds on the 7,393-yard Old Corkscrew, managed by KemperSports. Jack Nicklaus shot a 9 on the fifth hole, the no. 1 handicap, at the grand opening in 2007.

The softening of Old Corkscrew continues. Early on, danger zones along some fairways were cleared of scrub and underbrush. Previously shaven hillsides -- such as the par-5 third -- now grow free, adding rough to catch errant balls that once rolled back into the water. More recently, fescue growing on bunker edges has been removed for more playability.

The greens remain borderline controversial, however, considering their speed, wild undulations and hidden breaks. The most notorious offender is the plateau green at the 445-yard 14th hole. Fortunately, two strong, risk-reward par 4s on the back nine make up for this nuisance.

Old Corkscrew still demands harrowing approach shots to no. 3, no.5, no. 9 and no. 11, but for the most part, it's just a fun challenge.

Thick scrub vegetation, tree cover and wetlands make up this stunning 7,367-yard layout. The first impression of the place is a doozy: all the fountains, bridges, fancy homes and Mediterranean architecture along the two-mile drive to the course.

There are no immediate plans to finish the shell of a clubhouse, although the practice facilities and course make up for the issue. Water steals the show throughout the round, especially on the Cape hole at no. 11 and the long par 5s at nos. 12 and 18. Finishing the round with the same ball you started with is almost unheard of around here.

'It is one of those courses you need to see a couple of times,' said Director of Golf Mark Wilhelmi. 'We joke that you've got to get your practice round in. It's a tough course.'

My group -- including three single digits who played from the 6,792-yard blue tees -- lost roughly 20 golf balls. To be fair, we were all shaking off our winter rust.

Wilhelmi did tell me later the course was in 'tournament condition.' Dormant grass made it play firm and fast, so many balls rolled down slopes into water and bunkers. He said it is more player friendly later in the year when the grass grows longer. 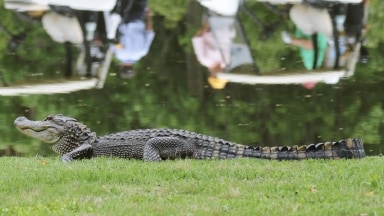 A group of golfers were enjoying a day on the course in Florida. However, then a shot was snatched up by a gator on the green.