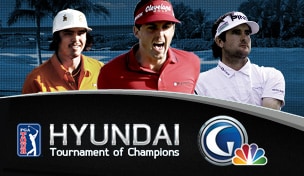 The 2013 PGA TOUR season kicks off this week at the Hyundai Tournament of Champions, and Golf Channel will be onsite bringing you all the excitement from Hawaii. Delivering exclusive coverage and analysis, Golf Channel will broadcast LIVE throughout the entire course of the tournament.

Marking the final time that the Hyundai Tournament of Champions will serve as the PGA TOUR’s season-opening event, 2013 will see an elite field of last season’s PGA TOUR winners gather at Kapalua Resort‘s par-73 Plantation Course. Defending champion Steve Stricker will be tasked with holding off a pair of 2012 major winners in Masters champion Bubba Watson and U.S. Open champion Webb Simpson. Keegan Bradley, Jason Dufner, Rickie Fowler and Ian Poulter are just a few more of the players who will join them in the quest for the first PGA TOUR victory of the season.

Don’t miss a minute of the action! Stay updated with the latest tournament news and watch LIVE coverage of all four rounds only on Golf Channel.

Coverage begins with a two-hour Golf Central Special on Thursday at 6PM ET on Golf Channel: