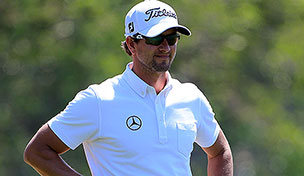 PALM HARBOR, Fla. – There are 12 players within two shots of the lead heading into the final round of the Tampa Bay Championship. The biggest surprise: Adam Scott isn’t among them.

Scott made three bogeys in his first five holes Saturday and struggled with all facets of his game during a 5-over 76 that sent the world No. 7 tumbling from a share of second place to a tie for 21st. K.J. Choi, who also began the weekend one shot off the lead, failed to record a birdie during a 76.

So poor was Scott’s round that he was outplayed by Shawn Stefani, a rookie who was playing in the final group on the weekend for the first time in his PGA Tour career.

Though Stefani went out in 40, he rebounded on the back side to post a third-round 73 at Innisbrook’s Copperhead Course, which in the late afternoon became fast and fiery.

“It played difficult and I didn’t play well, but heading into tomorrow I’m just two back,” Stefani said. “There’s still a chance to shoot a good round tomorrow.”

He can only hope he’s sharper than during his third round, when he missed five fairways, hit only 10 greens and took 30 putts.

The trouble began early for Stefani, who bogeyed the par-5 opener after leaving his third shot short of the green. He hit a tree with his drive on No. 2, but his ball ricocheted out into the fairway. On the next hole, his drive seemed destined for the trees but instead clanked off the bottom of a golf cart and hopped back into play. When told by a fan of the fortuitous bounce, Stefani smiled and woofed, “Clean livin’, baby.”

On the fourth hole, his tee shot on the par 3 nearly sailed into the hospitality tent.

“I was a little bit uncomfortable starting out, but I had fun all day,” he said. “There wasn’t one moment when I wasn’t smiling or having a good time. That was kind of the objective for the day, and I came out and did that well.”

Scott likely had different aspirations, such as picking up his first Tour victory in 20 months. Instead, he took a whopping 35 putts and made seven bogeys to drop five shots back.

“I didn’t really feel a buzz around the golf course at all,” Stefani said. “The last couple of groups, nobody really played great.”