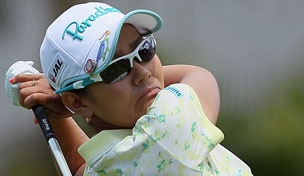 Miyazato shot a final round of 2-under 70, matched by Lee and one shot better than Munoz. The win was the eighth for Miyazato in the LPGA.

Cristie Kerr and So Yeon Ryu were five behind, tied for fourth at 7 under.

Suzann Pettersen was at 6 under and alone in sixth place.

Brittany Lang and Jiyai Shin finished at 5 under, seven shots behind and tied for seventh place.