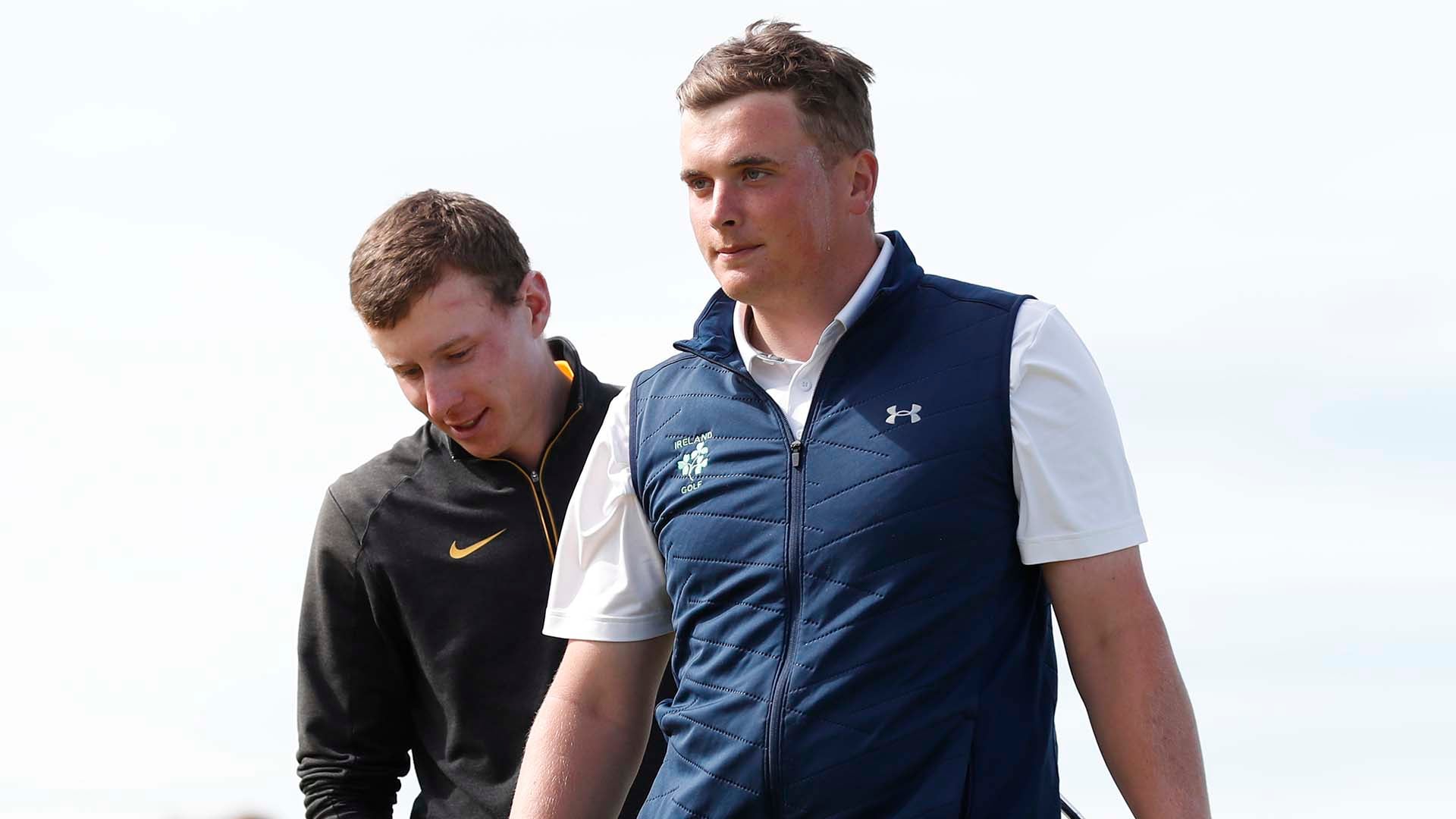 While Cole Hammer, Akshay Bhatia and Stewart Hagestad were being announced Wednesday as the first three U.S. Walker Cup team members, the GB&I side was hosting 16 potential players during a two-day practice session at Royal Liverpool, which will host the Sept. 7-8 matches.

The group was pared down from the list of 26 players released in April and is highlighted by Scotland’s Euan Walker, who is ranked ninth in the World Amateur Golf Ranking, and Ireland’s James Sugrue, who is ranked No. 61 and beat Walker in the final of The Amateur this summer.

“We have monitored results of the players originally selected since we last got together as a squad, while also keeping an eye on the performances of other players not included,” GB&I captain Craig Watson said. “We have brought in three new players who have had encouraging results in recent events, and we look forward to working with them and the other players when we meet up at Royal Liverpool this week.”

Englishmen Ben Schmidt and Joe Pagdin, who are ranked 18th and 28th, respectively, were not included. Schmidt opted to instead compete in this week’s Carris Trophy – and won it in a playoff for his third victory of the summer (he also captured the Sir Henry Cooper Junior Masters and English Men’s Open Amateur Stroke Play). Pagdin made match play at The Amateur before reaching the semifinals of the U.S. Junior Amateur last week.

Both players could help bolster a GB&I squad that on paper will be noticeably weaker than the American side. Just seven of the 16 players participating in the latest practice are ranked in the top 50 of the WAGR.

Sugrue is a lock to make the team, as is Walker, who was also runner-up at the European Amateur. England’s Ben Jones (37) was third at that event while also reaching the semifinals of The Amateur. Jones and fellow countryman Tom Sloman (34) were invited to the practice, as were Irishmen Conor Purcell (16) and Caolan Rafferty (22). All four have solid chances to make the final 10-man squad.

Purcell, Rafferty, Sugrue and fellow Irish practice-session invitee Mark Power (90) all were given byes into match play at this week’s South of Ireland Amateur, and each of them advanced past the first round on Friday. However, none of them made it past the Round of 16 that afternoon.

St. Andrews Links Trophy winner Jake Burnage (60) of England, Amateur Round-of-16 qualifier Bailey Gill (86) of England were the other top-100 players at the practice, which included four players outside of the top 100, all Englishmen –Thomas Plumb (134), David Langley (170), Joshua McMahon (177) and Matty Lamb (184). McMahon won the Lytham Trophy and Lamb was runner-up at the St. Andrews Links Trophy and made the Round of 16 at The Amateur, but otherwise those inclusions were a bit head-scratching considering some of the names left out – Schmidt, Pagdin and Conor Gough (73), who was once ranked sixth in the world.

There are now just seven spots available on this year’s U.S. Walker Cup team, and more realistically there are only six as Stanford grad Brandon Wu has certainly already earned his place alongside Hammer, Bhatia and Hagestad.

The race for the remaining invites is sure to be hotly contested with just two major measuring sticks left for the USGA, next week’s Western Amateur and next month’s U.S. Amateur at Pinehurst.

One could make a case for as many as 15 different players, including Oklahoma rising senior Quade Cummins, who won the Pacific Coast Amateur on Friday. Cummins broke 67 in each of the four rounds to shoot 20 under and win by four shots over Australia’s Blake Windred.

“I’ve never really been in a zone like that,” Cummins said. “I was just hitting to 20 feet and I was able to roll some in this week. This is definitely one of my better putting weeks. Golf’s funny, last week I felt like I was playing the same and I finished around 40th, but just having some putts fall can change everything.”

Cummins had nearly played himself out of Walker Cup consideration, following a top-5 finish at the Sunnehanna with a missed cut at the Northeast and T-43 finish at the Southern Amateur. But his victory will move him from 59th in the WAGR to comfortably inside the top 50.

Two strong weeks at the Western and U.S. Amateur could earn Cummins one of the final nods. Several names in front of him have either underperformed, most notably 10th-ranked Chandler Phillips, or are junior players. With Bhatia already on the team, it’s unlikely the USGA would take more than one additional junior player to England.

Other notable finishes from the Pac Coast: Cameron Sisk was T-12 and defending champ Isaiah Salinda was T-15. Sisk is a longshot at this point, though he’s had a strong summer, while Salinda has played sparingly and done little to back up his No. 12 WAGR position.

These three were officially added to the team on Wednesday as the top three Americans in the WAGR.

Wu dropped two spots in the last WAGR, otherwise he would’ve been among the three early qualifiers. Still, qualifying for both summer Opens secures his spot on the team.

Fisk won six times and was runner-up at the NCAA Championship as a senior. He made a Korn Ferry Tour cut. He’s ranked eighth in the world. And this team could use his grit and underdog mentality. Pak has finished T-13 or better four times this summer, including third Saturday at the Porter Cup.

Salinda’s senior year will likely be enough to earn him a spot, as long as he plays well at the Western and U.S. Amateur. Smalley won the Sunnehanna and was T-8 at the Players Amateur, though he won’t play the Western. Eckroat was top 10 at the Trans-Miss and qualified for the U.S. Open. Again, these three players need one more resume booster.

Two incoming college freshman played on the 2013 U.S. team (Jordan Spieth and Patrick Rodgers), though a junior player hasn’t played for the Americans since. Thorbjornsen making the cut at Pebble Beach was huge, so if the USGA decides to go with a second junior, he’d likely be the pick, especially considering he’s great friends with Bhatia. Castillo and Mouw are a run in match play at the Western or U.S. Amateur away from jumping Thorbjornsen, though.

Coody won the Trans-Miss. Young qualified for the U.S. Open. Cummins won the Pac Coast. And Theegala won the SCGA Amateur and was second at the Sahalee Players despite missing almost 10 months because of a wrist injury. Phillips has been steady all year but lacks a win.

Phillips has struggled mightily and probably needs to win at the Western or U.S. Amateur to make the team. Augenstein has potential but has shown very little in the past year. Ralston won the Players Amateur but likely has to show more to convince selectors. 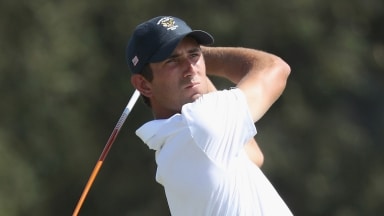 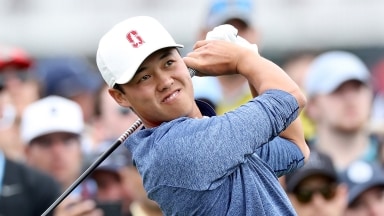 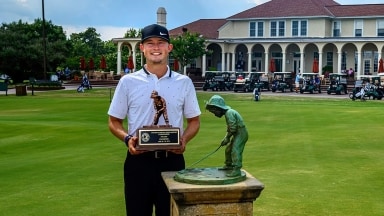