#AskLav: The Masters is so close, you can taste it 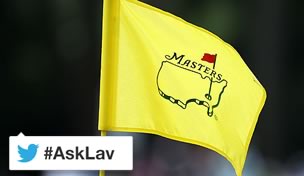 As if you needed another reason to be deliriously optimistic about this year’s Masters – besides the smack-you-in-the-face storylines of Tiger Woods resuming his race to 18 majors, Rory McIlory bidding to win three-quarters of the career grand slam and Phil Mickelson hoping to avenge last year’s blunder amid the bamboo – there is this:

The chicken sandwich is back in Masters concession stands.

Stand and cheer – politely, of course – because a year after one of the most popular sandwiches was removed in favor of a healthier alternative, deep-fried minds have prevailed in bringing it back. The re-entry of that $3 staple means a hearty lunch consisting of three sandwiches (egg salad, pimento cheese, chicken breast) and a lemonade will cost about $10. (Mmm, food.) Sorry, Waffle House.

Here are a few other savory morsels in this week’s #AskLav mailbag:

@ryanlavnergc were the tour right to strip Houston of its pre-masters spot?#AskLav

The Tour’s hands were tied with this one, alas. With the Masters so late this year (April 11-14), there is an extra week to fill between the Florida swing and the year’s first major. Why not flip-flop San Antonio and Houston, you ask? In its contract, Valero stipulates that the tournament cannot be held Easter weekend, which is the same scenario that led to the Hilton Head tournament being played ahead of the Masters (and not its customary week-after spot) in 2011. That said, the switch hasn’t seemed to hurt the Houston field, with 12 of the top 25 players in the world teeing it up this week. Redstone is always one of the best-manicured courses on Tour, and tournament officials set up the course to replicate the conditions players will face in two weeks. It’s always a great tune-up for Augusta.

@golfchannel Who have you seen that has surprised you the most this season?

Of course, Tiger’s play has been eye-opening – after all, he’s already matched his victory total from last year in the first four PGA Tour stroke-play events this year. But when it comes to Woods, little truly surprises. So give me last year’s major champions. Among the quartet of Bubba Watson, Webb Simpson, Ernie Els and Rory McIlroy, they have produced just a pair of top-5 finishes this season, and in neither event were they serious contenders. That said, Bubba’s game turned a corner last week at Bay Hill, and he seems primed to make a spirited title defense in two weeks at Augusta. As for Simpson, well, he captured medalist honors earlier this week at the Tavistock Cup, which just might be the most meaningless sentence I’ve ever typed.

#AskLav hey Rory, any chance you'll be at Arnie's tournament next year?

Considering he has never played Bay Hill – and clearly he isn’t afraid of turning down the King, who, as we saw in that EA Sports clip, has some pretty devastating counterpunches – then I wouldn’t count on seeing McIlroy next March in Orlando.

@golfchannel what do you think are the causes of Rory's struggles this year?

Myriad factors, of course, but the most significant reason is that he’s battling a flaw in his swing. Once that gets sorted out – plenty of practice time in the last two weeks, remember – there won’t be any talk about adjusting to the new equipment, or the pressures of being world No. 1, or whether he lacks the character traits to be a dominant and consistent force in the game. He’ll be just fine by summertime.

#asklav why does Rory not have a chance at this year's Masters? Is Tiger the outright favorite?

Of course he has a chance! This opinion is subject to change, especially after seeing how he performs this week in Houston. There are plenty of good seats still available on the Rory bandwagon, but if he follows up that Sunday 65 at Doral with another good showing at Redstone … yes, he’ll still be miles behind Tiger in terms of Masters favorites.

#AskLav if you were a top 25 pro, would you punch Stricker in the face or gut?

Stricks is too nice of a guy, so scowling at him might be most damaging. No, seriously, what he did by helping Tiger on the putting green at Doral is no different than what dozens of Tour pros do each week. They help. They are an extra (and expert) set of eyes. Stricker told reporters in Houston this week that he’s had about five players come up and ask him to look at their strokes. Some were joking. Some, however, were quite serious.

@ryanlavnergc #AskLav Coming up on the 16 year anniversary of Tiger's epic victory at the Masters. What do you remember most from the win?

Sixteen years – is this some kind of historic anniversary? But since you asked … mostly, I remember sitting in my tiny living room, watching on a little Zenith TV, just a few days after turning 10, and marveling at how a kid just barely a decade older than I was could humiliate the world’s best players. Naturally, it was inspiring. Even at that age, it was impossible not to believe you were witnessing the opening act from the greatest golfer who ever lived.