MALELANE, South Africa — Wil Besseling shot a 7-under 65 Thursday to take a one-shot lead after the first round of the Alfred Dunhill Championship - the European Tour’s 2020 season-opening event.

Besseling made six birdies, an eagle and just one bogey at Leopard Creek Country Club on Thursday to sit one stroke ahead of Garrick Porteous, Pablo Larrazabal and Keith Horne. 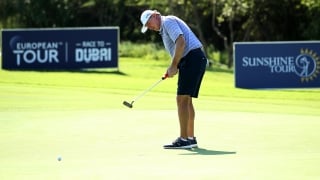 Besseling was one of the players to wear shorts in sweltering temperatures in northern South Africa, taking advantage of a decision by organizers to allow shorts in tournament play for the first time on the European Tour.

David Drysdale, last year’s runner-up, was in a group of players tied for sixth three shots off the lead. That group includes 2014 champion Branden Grace.

Four-time winner Charl Schwartzel carded a 70 on his return to action after being out for eight months with a wrist injury.