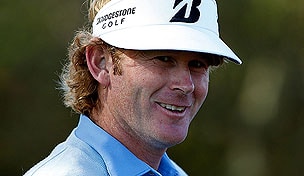 It’s been 36 years since a player won at Pebble Beach and Augusta National in the same year. Tom Watson was victorious on both venerable venues back in 1977.

That fact is noteworthy on the heels of Brandt Snedeker’s victory at Pebble Beach on Sunday. Thanks to a season which has already seen him start with four top-three finishes in his first five events, the world’s No. 4-ranked player is shooting up the list of most oddsmakers’ favorites for this year’s Masters.

In five career starts at Augusta, Snedeker has made the cut four times, including a T-3 in 2008, when he entered the final round in second place but posted a 77 on Sunday.

If there’s any consolation for Snedeker – and his supporters – regarding breaking the streak, it’s that his game has often been compared with that of Watson, who just happened to be his favorite player when he was growing up.