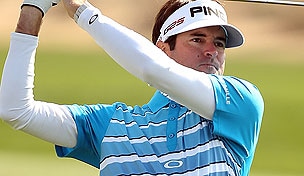 ORLANDO, Fla. – Bubba Watson’s bogey-free 67 in howling winds Sunday was just what the reigning Masters champion wanted to see in his final start before Augusta.

Now, Watson can turn his attention to more important things – like seeing if his young son Caleb can learn to walk in time for the Par-3 Contest.

“He can stand on his own but then he goes down to one knee because he realizes that something isn’t quite right here,” he said. “Kind of like I do sometimes.”

Watson stood tall Sunday at Bay Hill when the wind gusted up to 35 mph and the greens were “spiked up.” When he finished, his 67 was the low round of the day by two shots, and the final group was still an hour from teeing off and with more inclement weather on the way.

Rickie Fowler, two shots behind Woods and one of Watson’s closest friends, stayed with Watson this week at his renovated home in the Isleworth community. It also happens to be Woods’ former residence.

The last time Fowler and Woods were paired together in a final group, young Rickie didn’t fare so well – shooting an 84 to Woods’ 67 at the 2012 Memorial.

On Saturday, Watson said Fowler seemed unfazed by that earlier encounter and was in good spirits. They watched motocross in Watson’s theater room.

“One of Rickie’s gifts is that he forgets,” Watson said. “To be a good golfer you have to forget.

“Tiger is the greatest, and we want to be playing with Tiger. When you’re playing with him in the final group, final day, that’s what you want. You want to feel the pressure. (Rickie) is so young that the more he plays and is in that situation, the better he’ll do.”