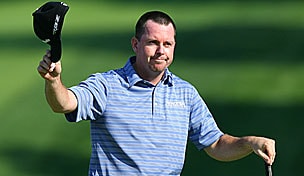 Getty Images
LA JOLLA, CA - JANUARY 30: Ryuji Imada of Japan prepares to hit his tee shot on the second hole at the South Course at Torrey Pines Golf Course during the third round of the Farmers Insurance Open on January 30, 2010 in La Jolla, California. (Photo by Stephen Dunn/Getty Images)  -

MARANA, Ariz. – For Robert Garrigus, the WGC-Accenture Match Play Championship is a dream come true. Sure, the $8.7 million purse is nice and the free room at The Ritz-Carlton is a slice of heaven, but for Garrigus the big draw is the format.

“It is an absolute blast to be able to step on the tee and say I'm going to swing as hard as I can, and if I make a 9, who cares?” said Garrigus, who dismissed the week’s last remaining top-seeded player, Louis Oosthuizen, 3 and 2, on Friday. “I can make a 10, who cares, I'm going to the next hole; it's only one hole. It's awesome, to tell you the truth.”

The Accenture is Garrigus’ first official match-play event since the 1995 Oregon state high school championship, which he easily won, 8 and 7 (“I was 9 under through 11 holes,” he smiled.).

Garrigus said he doesn’t even play match play when he’s at home, but conceded that he talked Ian Poulter into a four-hole match while paired together during the third round of last year’s Deutsche Bank Championship.

“We had nothing else to play for (they were tied for 42nd and 50th, respectively),” he laughed.

And who won the impromptu bout? “I did,” he said.

Not many Americans can say that.