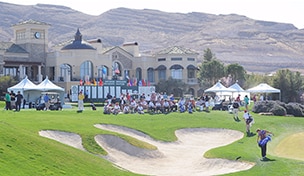 The closest tournament we’ll get to an NCAA preview begins Friday at the Southern Highlands Collegiate Masters. Featuring nine of the top 10 (and 12 of the top 13) teams in the country, Southern Highlands once again boasts the strongest field of the year and provides the best measuring stick as teams head into the final three months of the season.

Host UNLV is the defending champion – and has won the outright title five times since the event moved to Southern Highlands in 2002 – but it won’t be the favorite this year.

Cal is the No. 1 team in the country and for good reason. The Golden Bears have won a school-record seven times this season, most recently earlier this week at the Fresno State Lexus Classic, where they won by 37 strokes and finished 1-2-3 on the individual leaderboard. Sophomore Michael Kim, the No. 2-ranked player in the country, further bolstered his player-of-the-year resume, capturing medalist honors for the third time in his last four starts. He hasn’t finished outside the top 10 in each of his eight starts this season.

Sixth-ranked Alabama also figures to be in the mix come Sunday, after the Crimson Tide won their first and only start of the spring in Puerto Rico. That week they defeated Oklahoma, Georgia and Georgia Tech.

A few other tidbits on campus this week:

• N.C. State junior Albin Choi won his third consecutive event, this time at the USF Invitational, where he also helped lead the Wolfpack to the team title. With the victory, his fourth of the season, Choi improved to No. 7 in the country.

• Remember Mariah Stackhouse? She’s the Stanford freshman who shot an NCAA-record 61 to win her first college title. Well, she’s back in the winner’s circle again after capturing medalist honors at the Juli Inkster Spartan Invite. Stackhouse is now the 30th-ranked player in the women’s game.

Here are the top 10 men’s teams in the country, according to Golfstat’s rankings (click here for full rankings):