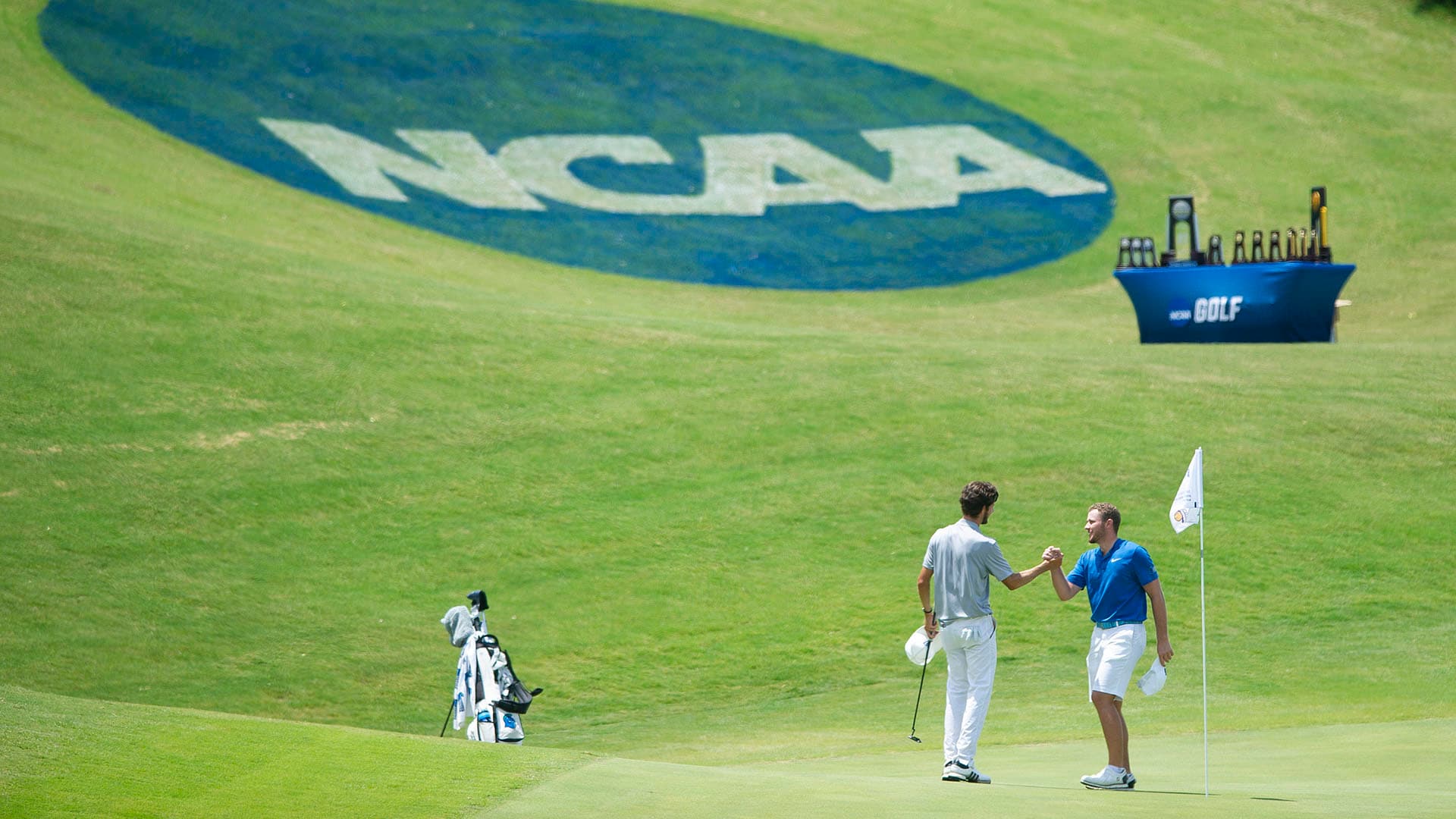 Match play has been used to determine the NCAA champion in men’s golf since 2009, but this spring there will be just four conferences who use the format to determine their champions.

There’s no doubt that match play provides more excitement than stroke play, so why aren’t more conferences getting in on the match-play party?

The answer is simple: Match play does not always crown the best champion. In fact, it rarely does, as last year’s NCAA Championship marked the first time that the top seed after stroke play won the title.

All of this makes the Ohio Valley Conference’s recent decision all the more surprising.

Two years ago, OVC coaches voted to switch to match play for their conference tournament, but school administrators overruled the decision, citing concern that the OVC, which typically has no at-large teams, wouldn’t be sending its best team to the NCAA regionals. However, a second vote earlier this spring – one that resulted in a 7-3 support of match play – means the OVC will make the transition beginning next spring, joining the Sun Belt, Conference USA, Big South and SEC.

“I think for student athletes, the head-to-head matchups are exciting,” Austin Peay State coach Robbie Wilson said. “Match play is something these guys have been watching on Golf Channel for last several years and the excitement behind that is spreading. From a coaching standpoint, the race for the fourth spot will bring more teams into play in the final round to make match play.

“The jockeying for seeds will add a dynamic that will be exciting.”

Jacksonville State is the highest-ranked OVC team at No. 128 in the Golfstat rankings. Eastern Kentucky is ranked 141st, followed by Austin Peay (159), Southern Illinois-Edwardsville (172), Belmont (184) and Morehead State (198). All of those schools have a shot of earning the OVC’s automatic regional bid this year, though stroke play will favor the three teams ranked in the top 160. But next year, match play could bring more teams into the mix.

Some coaches would argue if that’s a good thing.

“Isn’t 54 holes enough?” Eastern Kentucky coach Mike Whitson said. “At the conference tournament, for what historically has been a one-bid conference, we play for so much at the conference championship, meaning a trip to the NCAA tournament. Call me old-fashioned, but I believe the winner of the golf tournament should be the team that played that 54 holes in the fewest shots.

“It is very unfortunate that a team could win the stroke play portion by a convincing 12 shots, for example, and then start over the next morning with none of those shots counting.”

“I don’t think there’s any doubt – certainly won’t get any argument from anyone here – that we have the best conference championship,” Oklahoma State coach Alan Bratton said.

Power-5 conferences can afford to determine their conference winners with match play because several teams will be ranked high enough to earn automatic bids should they not win a conference title. Last year, the SEC had all 14 teams qualify for a regional. But one-bid, mid-major conferences don’t have that margin for error.

Wilson, pointing to college basketball as an example, said that’s not a problem.

“We are not scared of losing to a team ranked 200 or worse,” Wilson said, “and if it happens, there are no excuses. … I think it’s a bad example to tell your kids that the best team always has to win.” 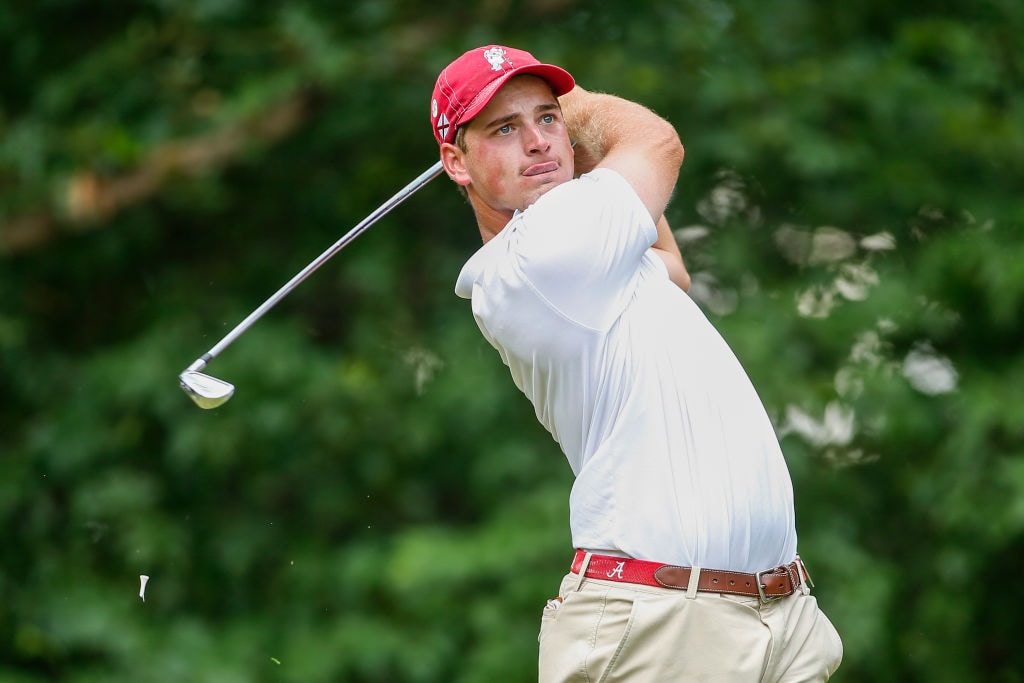 Alabama ended the fall ranked fourth in the country.

But that was before senior Davis Riley shockingly left the team in November to turn pro. That was before sophomore Davis Shore had season-ending hip surgery last month. That was before the Crimson Tide plummeted to 24th in the Golfstat rankings with spring finishes of 11th, 13th, fourth and ninth.

“Davis [Riley] left us leaderless,” Alabama coach Jay Seawell said, “so we had to rebuild an entire team around what we have.”

Seawell has enjoyed the challenge, but it hasn’t been easy. In its first round of the spring, in Puerto Rico, Alabama shot 18-over 306 and was 26 shots back after the first round. The Tide beat just four teams that week, and then followed by finishing last – by 19 shots – in Cabo.

But for as much adversity as Seawell’s squad has faced this spring, things are beginning to look up after a victory Tuesday at the Shoal Creek Invitational.

The Tide shot 13 under and beat No. 12 LSU by 19 shots. The field also included No. 13 Auburn, No. 15 North Florida and No. 22 Tennessee. Sophomore Wilson Furr won medalist honors by two shots and Alabama also got top-10 finishes from freshmen Prescott Butler and Frankie Capan, and junior Josh Sedeno.

In just 54 holes, things are suddenly looking up in Tuscaloosa.

“We have a long way to go, but it’s very rewarding as a coach to watch kids grow, and our guys have grown tremendously from the first round in Puerto Rico,” Seawell said. “As I told the guys, we’re not a broken team or a bad team, we’re just a team trying to find its identity.” 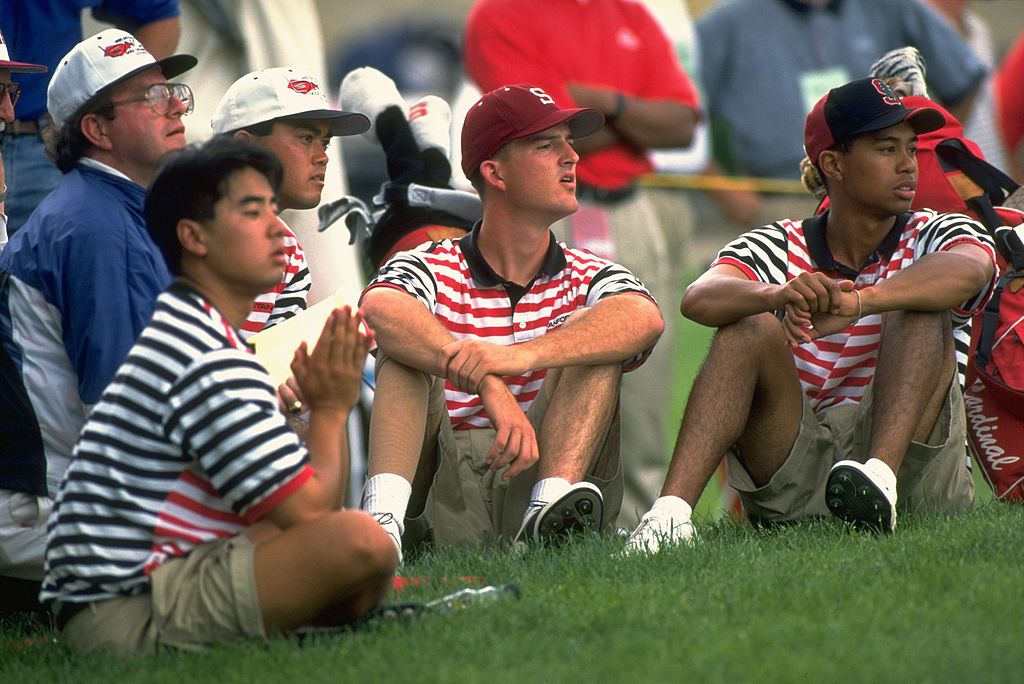 When it comes to memories of Tiger Woods' college days at Stanford, it's hard for Woods' former Cardinal teammate, Oregon head coach Casey Martin, to pick just one.

But Martin will never forget the first time he played golf with Woods.

Woods was an incoming freshman when he, Martin and Notah Begay teed it up together at Sharon Heights Golf and Country Club in Menlo Park, Calif. The course's greens had just been punched.

"It was un-puttable," Martin said.

Woods hit every green and shot 68.

"He didn't miss a shot," Martin said. "Notah and I, we were both returning All-Americans, and we looked at each other like, 'Oh my God. This is incredible.' I'd played with Phil [Mickelson], with [Jim] Furyk, all the top college players, but he was just different."

How about this nifty chip by Cal senior Cindy Oh in the final round of the Silverado Showdown last week? 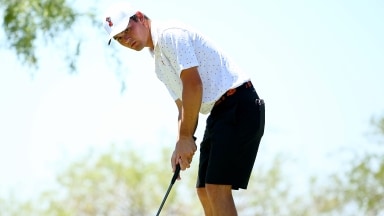 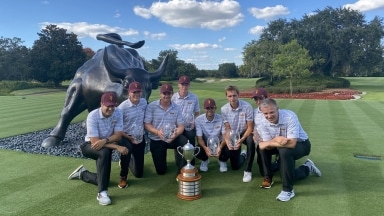 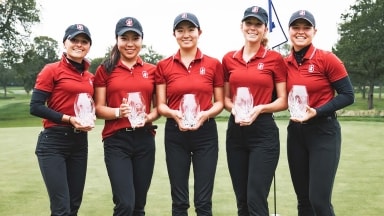