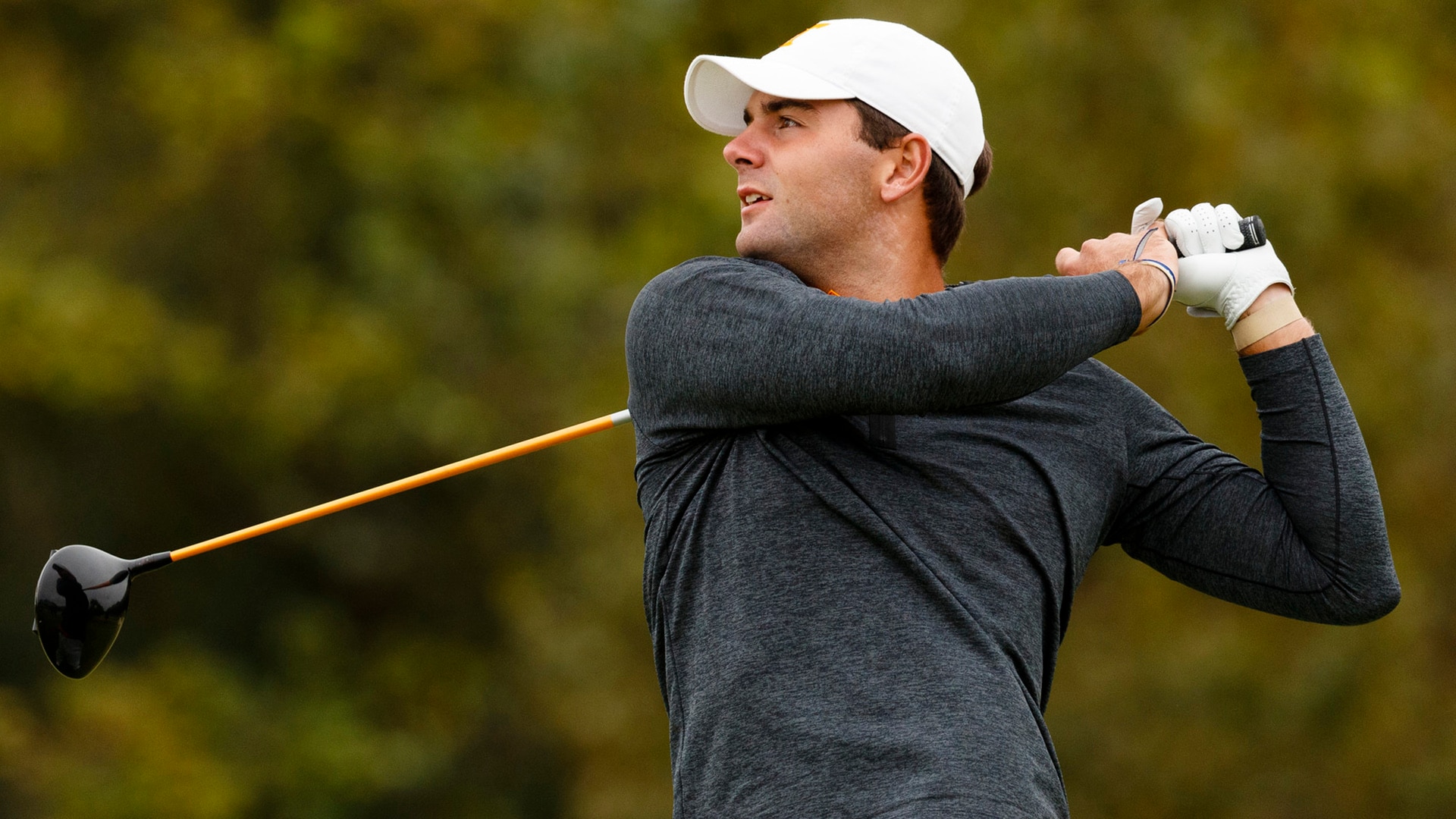 When Tennessee head coach Brennan Webb first arrived in Knoxville two seasons ago, he sat down with Hunter Wolcott, then a redshirt freshman, and made a bold statement: You can be a three-time All-American if you sit on this range and work your butt off.

While Wolcott has yet to achieve All-America status, he finally appears ready to make the jump into college golf’s pool of elite talents. The fifth-year junior opened the season with a runner-up finish last week at the Blessings Collegiate Invitational, shooting 4 under and ending up two shots back of winner Alex Goff of Kentucky.

The performance not only gives him a nice starting point for a potential All-American season, but it also moved him to 17th in the latest PGA Tour University rankings. The top five players after this spring’s NCAA Championship will receive Korn Ferry Tour cards. The next 10 will get access to one of the Tour’s international circuits.

Wolcott already knows a thing or two about professional golf. His older brother, Ben, played at Ole Miss and competed in a couple of PGA Tour Latinoamerica events last year. His father, Bob, spent five full seasons on the PGA Tour, most recently in 1997, a year before Hunter and his twin brother, Collier, were born.

While Hunter Wolcott never saw his dad compete (Bob’s final Tour start came in 2003), he has benefitted greatly from being the son of a former pro golfer. As expected, Wolcott grew up with a golf club in his hands. But he also had a pencil, detailing nearly every round he played and storing that data for reference – you know, the things the best players in the world are doing now; Wolcott was doing that in grade school. That info – club selection, true yardages, quality of the strike and more – served Wolcott well the next time he’d tee it up.

“I always felt like those were the small, little things that I could do to just get ahead of the game,” Wolcott said.

Now that he’s in college, Wolcott still leaves no stone unturned when preparing for tournaments. In addition to logging his shot-by-shot performance and statistics, he studies Google Earth before each event and seeks advice from other players who have experience on particular courses. He plans to pick former teammate Nolan Ray’s brain before his team’s next event at Vanderbilt Legends Club.

“His yardage book at these tournaments looks like a PGA Tour caddie’s,” Webb said.

Of course, Wolcott has had to put in the physical work, too. The 6-foot-4 bomber has always had elite length and driving ability – his last TrackMan session yielded a 129-mph swing speed with the driver. But his short game and wedge play needed some improvement if he wanted to be a top-level amateur and eventual Tour pro like his dad.

When Webb got the Vols’ head job, he installed a wedge strip on the team’s range, complete with 10 target poles in 10-yard increments, ranging from 40 yards to 130 yards.

“Hunter sat there and owned that strip for a year,” Webb said.

But that work ethic later slipped. After a strong sophomore year in which he won his first college event, Wolcott struggled to take that next step last season. In seven starts, he notched only two top-20s and two finishes outside of the top 40.

“My expectation level was higher than my level of hard work,” Wolcott admitted. “We had freshmen that were basically sleeping at the facility, and I was getting outworked by them.”

Needless to say, that has changed. Wolcott had a solid summer, capped by a run to the Round of 32 at the U.S. Amateur. He backed up that performance last week by shooting 68-73-71 on a course that hosted the 2019 NCAA Championship.

Those high expectations haven’t left Wolcott, he’s just finding it easier to realize them. The same goes for his team, which also finished second at Blessings, ahead of several national-title contenders within the SEC. While the Vols haven’t advanced past regionals since 2013, Wolcott believes that drought ends this spring.

“We expect to be here,” Wolcott said. “We don’t feel like we’re doing anything out of the ordinary, and I definitely love our momentum moving forward.”

Added Webb: “We’ve worked really, really hard to be a team that shows up at these events expecting to win and expecting to play well. I know what a great team looks like, and this is a great team.”

Especially with Wolcott playing at an All-American level.

The substitution rule is expanding in the women's game.

However, the Division I Competition Oversight Committee on Wednesday approved subs for the entirety of the NCAA women's postseason, beginning with the 2021 regionals. Teams will be allowed to make substitutions between NCAA regional rounds and at the finals site for both stroke play and match play. 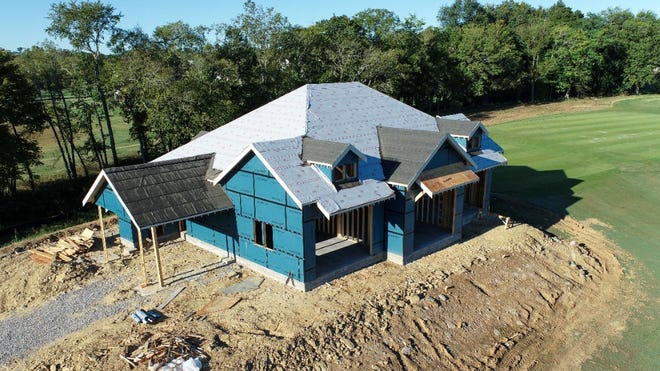 Big things happening at The Grove

For the first time in seven years, Middle Tennessee State is a winner of its home event.

Palmer Sadlowski’s 15-foot birdie make on the final hole followed closing birdies by teammates Michael Barnard and Owen Stamper and clinched for the Blue Raiders a share of the team title with Louisiana-Monroe on Tuesday at The Grove.

“I've never really been under pressure like that before,” said Sadlowski, who notched a career-best, 5-under 67 to finish T-9, his first collegiate top-10 finish. “The whole round I was just like, ‘When is this grind going to be over?’ … Luckily, I was able to finish it out with a birdie.”

The co-victory closes a three-event fall for Middle Tennessee State, which also recently announced a $1 million golf facility that is currently being built at The Grove. The 3,851 square-foot facility, which had construction begin on Aug. 15, is expected to be finished by the end of the year and is being funded by private donations.

The facility will feature three indoor hitting bays and an indoor putting area, as well as a player lounge, office space and training areas.

“From a collegiate golf standpoint, having a home course that is a top-ranked golf course with what will be the finest training facility in the state is a game-changer on many levels,” Middle Tennessee State head coach Mark McEntire said. “Not only will this help with recruitment, gaining the ability for year-round play and training gives our players a definite edge.”

Move over Texas? Move over Oklahoma State? Is Baylor the new favorite to win the Big 12 women’s title next spring?

The Bears are building their case after notching their second win in as many events to begin the fall. Following an 11-shot victory Sunday at the Betsy Rawls Longhorn Invitational, Baylor has now beaten two all-Big 12 fields by a combined 42 strokes.

Junior Gurleen Kaur also has yet to lose this fall, winning her second straight individual title on the heels of a bogey-free 66 in the final round that left her at 13 under, a shot clear of Oklahoma State’s Isabella Fierro.

Kaur is the first Baylor player to win back-to-back individual titles since Mary Coleman Hornsby in 1996, and she’s just the second ever to do so. Baylor also won consecutive events for the first time since 2015, when it won conference and regional titles before finishing runner-up at the NCAA Championship.

“The depth of this team is unlike any team I've ever had,” Baylor head coach Jay Goble said. “You go straight down the line and every player on our team is great.”

While Baylor has dominated the opening two events of the fall, it’s worth nothing that its top challengers in the Big 12 have yet to fire on all cylinders. The Longhorns, winners of each of the past three Big 12 Championships, returned All-American Kaitlyn Papp to the lineup for their home event (Papp tied for fourth), but they will also be without two likely starters, Agathe Laisne and Sara Kouskova, until the spring. Oklahoma State, meanwhile, traveled just three players to Austin and was unable to post a team score. The Cowgirls also are without one of their top players, Maja Stark, until the spring.