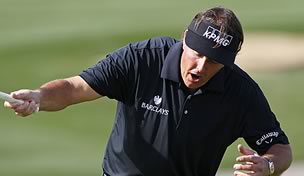 Anyone who thinks the 16th hole at TPC Scottsdale is lively during the Waste Management Phoenix Open didn’t get a look at the Cut Line newsroom this week. From deer-antler spray to putts for 59 to a much-anticipated return to Winged Foot for the national championship, the last week of January may be remembered as the news cycle that wouldn’t rest.

Lefty. Nothing changes the conversation quicker than a historic round. That it was Phil Mickelson, a week removed from a media mea culpa over taxes, dictating the topic only added to the drama.

Lefty’s flirtation with golf’s magic number (59) on Day 1 in Scottsdale wrested golf away from a dialogue that has drifted from anchoring and bifurcation to deer-antler spray, not to mention California’s tax code and the role of athletes in politics, however temporarily.

And all this from a player who if not for a series of delays and hurried finishes last week at Torrey Pines would have missed the 54-hole cut at the Farmers Insurance Open (Mickelson was tied for 77th through three rounds in San Diego).

Golf is at its best when Phil is playing his best, a truth that was never more evident than it was on Thursday at TPC Scottsdale.

Fun. The word is not exactly associated with many modern golf courses which are widely stretched to obscene lengths to accommodate the 1 percent who play for pay with all manner of forced carries and white-knuckle tee shots.

While the focus during last week’s PGA Merchandise Show was on the possible ban on anchoring, many in the game will point to modern golf courses that are something less than user friendly as a primary impediment to growing the game.

“Televised golf and golf for professionals, so much is placed on difficulty and how to make things difficult,” Crenshaw told Cut Line. “But you try to offer something else for the golfing public and it’s a very difficult decision to put things together. You have to combine that with the reasons why you do courses. I tend to think occasionally we have forgotten about fun.”

That may explain why Crenshaw and Coore’s Red Course at the new Florida resort was appointed instant classics status from many observers.

To 2020 and beyond. News this week that the U.S. Golf Association will return to venerable Winged Foot for the 2020 U.S. Open was widely applauded – even Mickelson hailed the news; although he may want to suggest fewer corporate tents down the left side of the 18th fairway for the ’20 championship.

The announcement, however, drew renewed attention to the USGA’s continued aversion for a return to Torrey Pines, site of the historic 2008 Open and an inspired venue for a much-needed SoCal championship.

“The USGA is trying to make a concerted effort, ever since ’02 going to Bethpage for the first time, (to go to) big public venues. (Torrey Pines) is the West Coast version, and it was amazing,” said Tiger Woods, who won his eighth professional title at Torrey Pines on Monday. “Torrey Pines and everyone here involved in it really made this tournament special, and I think the USGA will definitely come back.”

But the USGA doesn’t seem to share Woods’ enthusiasm for Torrey or the West Coast, or perhaps the blue coats just have a serious distaste for red-eye flights. There are currently just two West Coast stops for the Open through 2020 (2015 at Chambers Bay in Washington and 2019 at Pebble Beach).

Feeling the heat. Give USGA Championship Committee chair Tom O’Toole credit for stepping into the line of fire this week even if you don’t like the message.

O’Toole, on site at Winged Foot for Monday’s announcement the U.S. Open was returning to the layout in 2020, was asked about comments made by TaylorMade CEO Mark King regarding the ongoing anchoring debate and the growing support for the bifurcation of the Rules of Golf.

“The USGA within 10 years will be a non-entity; they will be a non-factor within golf because they are choosing to be on the outside, and no one is signing up for what they represent,” King said.

O’Toole deftly sidestepped the issue saying, “Our position has been that the game would not be benefited by bifurcation, and that's still our position.”

Vijay Singh. In a statement on Wednesday, the Fijian said he was unaware the deer-antler spray he purchased from an Alabama-based company contained a substance banned by the Tour’s anti-doping policy and that he was “angry” for putting himself in this position.

While that statement may mitigate whatever punishment the Tour doles out – according to policy he can receive up to a one-year suspension and $500,000 fine for an initial violation – it does nothing to change his culpability.

On this the Tour’s policy, drawn almost directly from the World Anti-Doping Agencies’ regulations, is clear. Ignorance is no defense in the dogmatic world of anti-doping.

The only question that remains is how long his suspension should be and on this Ponte Vedra Beach, Fla., should proceed carefully. Doug Barron is the only player suspended (one year) under the circuit’s anti-doping rules for testing positive for testosterone and beta blockers, which were both prescribed by his doctors for health reasons, in 2009.

It’s worth noting that Barron played the Web.com Tour last year on a therapeutic-use exemption that allowed him to use some of the same substances that got him suspended.

While Singh – who told a Sports Illustrated reporter that he had been using the deer-antler spray “every couple of hours . . . every day,” and was “looking forward to some change in my body” – has, by his own admission, conceded he sought a performance enhancement.

The Tour entered the world of anti-doping in 2008 to prove the sport was clean. As inflexible as those rules may seem now, there is no going back.

Tweet of the week: @JoshBroadaway “That (deer) antler spray didn’t do much for me when I took it. It just made me wanna start rubbin trees when I was in the woods huntin for my ball.”