Els regrets not advising McIlroy to finish round 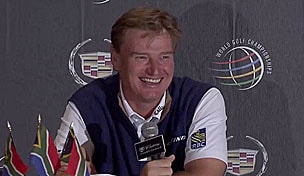 For Rory McIlroy, his decision to walk off the golf course last Friday at the Honda Classic after eight holes has caused no small amount of regret.

“It was a reactive decision,” the Ulsterman told Sports Illustrated. “What I should have done is take my drop, chip it on, try to make a 5 and play my hardest on the back nine, even if I shot 85. What I did was not good for the tournament, not good for the kids and the fans who were out there watching me – it was not the right thing to do.”

For Ernie Els, who was paired with McIlroy on Friday at PGA National, the incident also caused a level of regret.

“When I shook his hand on 18 (the group’s ninth hole) I wanted to say something and I didn’t,” Els said on Tuesday at Doral. “I kind of regret that.”

Els wished he would have advised the 23-year-old to finish the round, to do the right thing, but that was before the South African learned of McIlroy’s ailing wisdom tooth that he said was the cause of his withdrawal.

Even then, however, Els offered a way in which McIlroy could have carried on: “I think I would have taken a (expletive) load of Advil,” Els said when asked how he would have handled a similar situation.

Els said he spoke to McIlroy over the weekend at The Bear’s Club in Jupiter, Fla., and that the world No. 1 seemed focused on his game, not regret. “He was working hard all weekend,” Els said.

Els also said he understands the pressure McIlroy is feeling having spent nine weeks atop the world golf ranking.

“You’re exposed and people look up to you and you’re kind of the leader of the pack and you have to act accordingly,” Els said. “It’s a lot of stress. It’s a lot more pressure than the guy who is 50th in the world.”