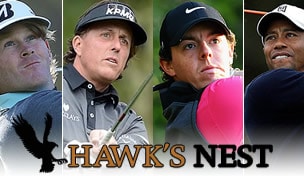 YEAH, WE GOT a little snow in Connecticut last week. Thirty inches, give or take a flake, which left me with a tough decision. Do I start shoveling 25 yards of driveway when it’s 19 degrees out and still blowing like hell, or do I watch celebrity Saturday at Pebble Beach?

I chose the blizzard. Do I really need to sit through another frame-by-frame analysis of Huey Lewis’ golf swing? Am I in a better place because Bill Murray is sporting extended mutton chops? Seriously, you could run a rebroadcast of the third round in 2007 and no one could tell the difference. They need some new blood at that tournament. Sorry, but celeb-a-chop ain’t my thing.

The problem with 30 inches of snow is that you’re out there for like an hour and clear about 4 feet of earth. The payback comes when your daughters start laughing because their snowman just tipped over. Or when they pull out the inner tube and find 20 minutes of joy while sliding down a mound created by the excess from the driveway.

My guess is that Tiger Woods, who grew up in a suburb of Los Angeles (is that a redundancy?), never threw snowballs as a kid. February in the Northeast isn’t for a lot of people, but a few uppercuts from Old Man Winter are of little bother to me. Cold weather and all its inconveniences are only as bad as you allow them to be – it’s not half as brutal as watching washed-up actors hit lousy golf shots.

Tell you what, though. By the time you read this, my next-door neighbor and I will have already split the cost on a snowblower.

BOY, DO I love Brandt Snedeker. He plays faster than fast, has the coolest little follow-through and acts like he’s been there before, even if he hasn’t. He also wears one of those old-school visors – the 1980s design you’re more likely to see on some rich old lady to keep the sun off her face. I like a man comfortable in his own skin.

That 65 Sneds fired Sunday to win at Pebble Beach was a textbook round of golf, a performance reflective of a dude rapidly approaching the game’s highest level. And that has me thinking about the Masters, which is still almost two months away, but I’ve seen enough in the first six weeks of the season to formulate some very early odds.

• Woods (7-1): Hasn’t won an emerald sportcoat since 2005, hasn’t putted well at Augusta National for just as long, but his recent win at Torrey Pines was fueled by an airtight short game. He knows he needs to get moving up Mount Nicklaus. The harder the conditions, the better his chances.

• Rory McIlroy (10-1): Nike surely will adjust the dials on his new clubs, but that doesn’t mean he’ll hit it any better than he did at Abu Dhabi. where he missed the cut. Hasn’t played since – why is the kid taking such a long break? Still the world’s best player, but more than ever, it’s a what-have-you-done-lately world.

• Snedeker (12-1): Fell apart with the final-round lead in 2008, but this is a totally different player now. I’m blown away by the dramatic improvement in Sneds’ ball-striking consistency. The guy missed a grand total of four fairways last week, more proof that swing coach Todd Anderson is one of the best in the business. On the greens? The Visor has never needed an adviser.

• Phil Mickelson (12-1): His putting stroke had better fluidity and pace throughout the win at TPC Scottsdale – so much for that ninth rendition of “Phil is Phinished.” I’m not a huge fan of the way-left miss, as you can’t play Augusta National from the wrong fairway, but Lefty didn’t win three jackets by virtue of his pinpoint accuracy, either.

• Louis Oosthuizen (15-1): Won a European Tour event in his native South Africa at the beginning of the year, continuing a stretch of fine golf that has continued for a while. Lost the Masters playoff to Bubba Watson last year. When he’s on, he’s really, really on. And when he’s not? No one will remember I had him as a favorite in February.

UNLESS MY MEMORY fails me, which is entirely possible, I’ve played in three official pro-ams during my 18 years as a golf writer, all of which were multi-round events similar to the one last week. I’ve worked with people who have played in a bunch of the Wednesday gatherings on the PGA Tour. Most of those folks either sold ads or sat behind a desk telling guys like me what to do.

What I vividly recall are the half-dozen or so times I’ve played a casual round with one of the game’s biggest stars.

• Fred Couples – Lucky me, getting the assignment to do a full-length interview with Couples for Golf Digest in the spring of 2003. Fortune smiled again when he won the Shell Houston Open the day before we met at his home in Southern California, a victory that remains Fred’s last on the big-boy tour.

The original plan was for me to leave early Tuesday evening. I know I was still hanging around Thursday morning, and I must admit, an afternoon nap feels even better when Fred Couples is snoozing on the other couch. We teed it up at the Valley Club in Santa Barbara with his buddy John Pate, an outstanding amateur and brother of Steve.

At the par-5 first, Couples hit driver-5-iron to 20 feet and made the putt, literally continuing the conversation while striking all three shots. He birdied the second with a turkey sandwich hanging out of his mouth, then the third and fourth, and at that point, I was just a wee bit impressed. You could see Couples getting a little bored with it all, however, as if the game had become too easy. I have no idea what he ended up shooting. I’m pretty certain he didn’t, either.

• Phil Mickelson – One of the most important rounds I’ve ever played in terms of improving my game. The day after the 1999 Tour Championship, I was asked to join Lefty, his caddie, Jim Mackay, and amateur-extraordinaire Danny Yates III for a game at Peachtree CC in Atlanta. Since Mackay, a scratch player at the time, was only the third best player in the foursome, we basically had three A players and a G-minus.

My little 4 handicap held up quite well, however, especially with Mickelson reading the greens. “If this one’s gonna go in, it has to enter the hole right here,” he would explain, pointing to a spot on the edge of the cup. It was as if someone beat me over the head with a burlap sack full of common sense.

Mickelson read putts “backwards” – from the hole to the ball instead of ball-to-hole – and basically envisioned the line in his head, which allowed him to account for speed and dismissed terms such as “right edge” or “two cups out” from the equation. Rocket science? Maybe not, but we won some bread that day, and I’ve been a fairly decent putter since.

• Jesper Parnevik – I’m a trifle embarrassed to admit that I don’t remember when and where we played; probably Mirasol or Old Palm in the mid-2000s. What I’ll never forget was a fiercely contested match pitting Parnevik and Tim Rosaforte vs. myself and caddie Lance Ten Broeck, who holed a putt on the 18th for the W.

We were warming up before the round and Rosaforte wasn’t hitting it very well, which immediately got Parnevik’s attention. The Swede came over and spent the next 20 minutes searching for a cure, spending most of the time on one knee and literally teeing up each practice ball for Rosaforte’s next attempt.

I’d never seen a Tour pro do something like that before, and it’s highly likely I’ll never see it again. What always made Parnevik so appealing to me is that he couldn’t spell “ego” if you spotted him the g and the o.

• John Cook – Orlando’s Isleworth G&CC had recently been lengthened and toughened up when we met Cookie there for a round in March 2005. I had begun my season playing well and was looking forward to showing the pro my game. It even crossed my mind that I’d out-drive the old man once or twice, if not all day, seeing how Cook had become one of the Tour’s straightest but shortest hitters.

Not a chance, fella. I spent the afternoon in the right bermuda, 30 or 40 yards behind Cook, who might have missed one fairway. He shot a 69 without an ounce of wasted breath on a behemoth course, reminding me that writers should stick to writing and Tour pros should make their 8-footers.

BY THE WAY, one of the worst golf experiences I’ve ever endured was a round with trashy talk-show host Maury Povich back in the mid-1990s. I mean, the guy was a nice player, and if you don’t believe me, ask him – he’ll be happy to tell you. An unfortunate victim of fame and illusion, Povich’s love affair with himself was hard to digest for 4 ½ minutes, much less 4 ½ hours.

The son of legendary Washington, D.C., sportswriter Shirley Povich, one of the nicest people ever to sit behind a typewriter, Maury was all the proof I’ve ever needed. Sometimes, the apple falls miles from the tree.