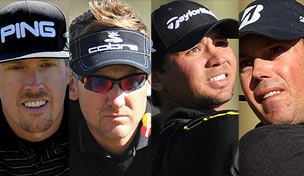 MARANA, Ariz. – Those who had Ian Poulter, Matt Kuchar, Hunter Mahan and Jason Day in your WGC-Accenture Match Play Championship final four bracket, collect your winnings at the door.

As for the rest of the misguided masses, shame on us.

Sure, it’s not exactly a dollop of Duke, North Carolina and Kentucky with a side order of Kansas, but as a rule the Match Play has an aversion to scripts. Since the PGA Tour got into the February Madness business we’ve never been graced with a single No. 1 vs. No. 2 final.

The Match Play didn’t invent parity, but it certainly has perfected the concept.

So for all those who ripped up their brackets following Black Thursday when Woods and Rory McIlroy were sent packing welcome to the old normal, and as much as the marquee may not agree that’s not a bad thing.

If the cast of remaining characters doesn’t move the needle, consider the final four includes two former Match Play champions (Poulter and Mahan), perhaps the game’s most consistent player (Kuchar) and a youngster whose play is starting to catch up with the predictions (Day).

The two that should surprise the least are Mahan, the defending champion, and Poulter, who would be the one closing on Jack Nicklaus’ all-time major championship record if every week were a match-play event.

With his 3-and-2 victory over Steve Stricker in the quarterfinals Poulter improved to 22-9 in the Match Play. Add in that garish Ryder Cup mark (12-3-0) and it’s surprising WGC officials didn’t forgo the World Ranking as the seeding tool and slot the Englishman in as the top seed despite his strangely calm demeanor at Dove Mountain.

“I really enjoy the fun of match play,” said Poulter, who beat Tim Clark, 5 and 3, in his morning match. “As good as my record is in the Ryder Cup, it doesn't translate into playing just for yourself. But my record in match play is very, very good, and I'm just very comfortable going toe to toe with somebody.”

As for that missing fire?

Mahan will see it in Sunday’s semifinal match, but then intimidation is a two-way street. Mahan hasn’t trailed in a match since the sixth hole in his first-round match against Zach Johnson . . . in 2012. That’s 131 holes without a deficit on a golf course with an abundance of bad bounces and a format that often favors the fortunate.

“Webb (Simpson) had the honors today, and I realized how much I didn't like him hitting first just off the tee box,” said Mahan, who beat Simpson, 1 up, and was pushed past the 15th hole for the first time all week. “I just didn't like it. I liked going first and hitting it and then walking. I felt like I had a rhythm there.”

Kuchar can relate. He hasn’t seen the 18th hole since Tuesday’s practice round following his 3-and-2 victory over Robert Garrigus in the quarterfinals. The American has also emerged as something of a match-play specialist, having improved to 13-3 at the Match Play with his performance Saturday.

“For me I think my game is just a steady game,” said Kuchar, who advanced to the semifinals in 2011 and final four last year. “I'm going to try to never give a guy a hole, and I think that's a big key in match play, just not giving holes away.”

Which brings us to Kuchar’s semifinal tee mate Day, who has had the roughest road to the final four and may be Saturday’s biggest surprise. Following an extra-innings bout against Russell Henley in Round 2 the Australian defeated Bubba Watson early Saturday, 4 and 3, and took a well-timed 1-up lead over Graeme McDowell in the matinee when the Northern Irishman missed a 10-footer for par at the 17th hole.

Not bad for a guy who has been slowed by a “sports hernia” since last December’s World Challenge. But then Day has been dealing with all manner of injuries since he first turned pro, not to mention the mental hammering match play can deliver.

“It was very stressful out there today,” said Day, who played his last nine holes in 2 under par. “I feel like my mind is going every which way right now. Just to play the way I did on the back nine was very, very special.”

If Sunday’s final four doesn’t exactly feel just as special, consider the history of the event, if not the quality of those still playing.