Ironman Killeen, Guthrie in the mix at True South 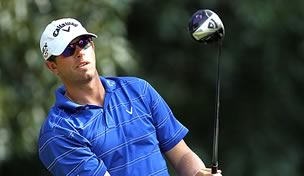 Getty Images
SINGAPORE - NOVEMBER 13: Padraig Harrington of Ireland looks down the 12th hole during the first round of the Barclays Singapore Open at Sentosa Golf Club on November 13, 2008 in Singapore. (Photo by Ian Walton/Getty Images)  -

No player has made more PGA Tour starts this season than J.J. Killeen.

Not that he’s enjoyed much success, mind you.

Finally, though, his doggedness may be paying off. In his PGA Tour-high 26th appearance of the season, Killeen shot a 6-under 66 Thursday to sit two shots off the early lead of Jason Bohn at the True South Classic, the opposite-field event this week on Tour.

Just how surprising was Killeen’s opening round at Annandale Golf Club in Madison, Miss.?

Consider that the 66 matched his lowest round of the year, and Killeen has posted just one top-25 finish this season -- a T-14 at the Puerto Rico Open in March, an event played opposite the big-money WGC event at Doral. In his past four starts, he’s gone MC-71-MC-T71.

Last year, Killeen, 30, won twice on the Web.com Tour, earned more than $400,000 and clinched his PGA Tour card for the first time in his career.

Also of note early at the True South: the continued impressive play of Luke Guthrie, the recent Illinois graduate, who shot 65 Thursday and is one shot back of Bohn. In his first two starts on Tour, he’s finished T-19 and T-5 at the FedEx St. Jude Classic and John Deere Classic, respectively. And to think Guthrie was only a second-team All-American this past season with the Illini.

Guthrie's torrid start begs the question, though: Is he this year's Bud Cauley?