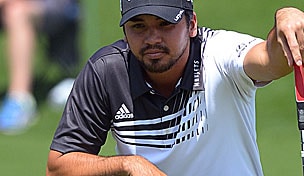 On a Masters Friday that seems destined to be remembered more for a flag stick and slow-play penalty, Jason Day shot a 4-under 68 and seized his first 36-hole lead in a major championship. Here’s the skinny on the second round at Augusta National, where 12 players are within three shots of the lead:

The leaderboard: Jason Day at 6 under; Fred Couples, Marc Leishman at 5 under; Angel Cabrera, Jim Furyk and Brandt Snedeker at 4 under; Tiger Woods, Adam Scott, Lee Westwood, Jason Dufner, Justin Rose among those at 3 under.

What it means: The runner-up here in 2011, Day will head into the weekend with his first 36-hole lead in a major. He is at 6-under 138, a shot ahead of Fred Couples and Marc Leishman. Day, who began his season with three top 10s in his first four starts, including a third-place showing at the WGC-Match Play, hadn’t finished better than 33rd in his last three starts. No Australian has ever won the Masters.

As for Woods (71), he seemed on the verge of taking the lead when his 60-degree wedge shot into the par-5 15th clanked off the flag stick and rolled back into the water, leading to a bogey. On the last hole, he three-putted from long distance – the first time he has three-jacked the 18th hole – to finish at 3 under, three shots back, as he attempts to win at Augusta for the first time since 2005.

Round of the day: Angel Cabrera, the 2009 champion, fired a 3-under 69 to sit two shots off the lead. Several marquee names also shot solid second rounds to position themselves for a shot at their first major title: Brandt Snedeker birdied two of his last three holes to get in the house at 4-under 140 – just a stroke ahead of Adam Scott, who rallied with a back-nine 33, and Jason Dufner, who shot a Friday 69.

Best of the rest: A disappointment turned out to be a moot point for Tianlang Guan, the 14-year-old who this week became the youngest Masters participant in history. Inside the cut line as he played the closing stretch at Augusta National, Guan was docked a penalty for slow play after his second shot on the 17th hole. It was just the fourth slow-play penalty in the last 16 years in a major. With the second-round 75 and 4-over total through 36 holes, Guan waited more than four hours to see if he would be around for the weekend via the 10-shot rule. At 14 years, 5 months and 18 days, Guan became the youngest player to make the cut in a major, topping the previous record held by Matteo Manassero (16 years, 2 months, 29 days) at the 2009 British Open.

Biggest disappointment: Phil Mickelson slumped to a second-round 76, a day after vowing to play more aggressive at Augusta National. The three-time Masters winner is nine shots off the lead heading into the weekend. Popular picks Louis Oosthuizen, Ian Poulter and Hunter Mahan each missed the cut, which fell at 4-over 148.

Main storyline heading into Saturday: As always, it revolves around Woods. Making bogey on two of his last four holes left him three shots back with two rounds to play. In other words, he’s still right there. So, we ask: Will this major weekend be different? Last year, he held a share of the 36-hole lead at two majors and was in the mix at a third (British). Of course, he struggled over the last two rounds, staying on the major schneid. This year feels different – after all, he has won half of his six worldwide starts this season – but until Woods proves himself (yet again) on a major weekend, questions will remain. Worth noting: He has never won a major when outside the top 5 after 36 holes.

Shot of the day: Breaking out of a three-way tie, Day holed a big-breaking, 12-footer on the 16th hole to jump to 6 under and take a one-shot lead.

Quote of the day: “I respect the decision. This is what they can do. It still has been a wonderful experience for me.” – Guan, to ESPN, after being assessed a rare one-stroke penalty for slow play.